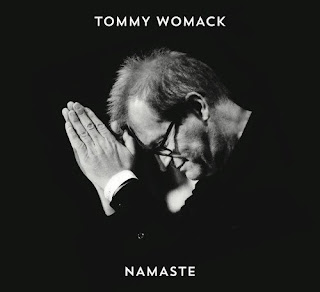 Tommy Womack’s remarkable new album, Namaste, is several shades of wonderful. It features all original material, written or co-written by Womack, and this is truly some excellent and witty songwriting. The music combines elements of country, folk and blues, sometimes used humorously, but always honestly. This album had me laughing aloud several times, but also moved me. It’s a very human collection of songs. Take a look at the cover photo. It was taken at a benefit concert after Tommy Womack was in a horrific car accident, busting ribs and pelvis. He’s clearly thankful, but he also seems both relaxed and joyful. And it seems that all of what he was feeling at that moment is in the songs on this disc. It’s one of those albums that I liked almost immediately, but which by the end I was completely adoring.

The album opens with “Angel,” which has kind of a sweet, catchy older folk rock vibe, coming as a delightful surprise the first time I popped in this disc. “Angel, you got me on my knees/I got problems.” That’s followed by “Comb-Over Blues,” one of the tracks that had me laughing out loud. It’s a very humorous blues tune, with funny lines, such as “I ain’t got a lot to lose/I got the comb-over blues” and “I look good from the front, but I’m not fooling anyone” and “I’ve got every last follicle doing the work of five.” When my hair went away, I ended up giving up and shaving my head fairly soon, my way of dealing with these particular blues.

“End Of The Line” also has some catchy elements, with a strangely positive vibe mixed with lines that might not seem all that positive. Lines like “I had to hock my old guitar at the end of the line/The end of the line is where you will find a loser’s blues like mine/Just getting by at the end of the line.” The tone makes it all seem okay. “End Of The Line” was written by Tommy Womack and Rich McCulley. It’s followed by one of my favorite tracks, “It’s Been All Over Before,” an excellent folk song that reminds me a bit of some of Bob Dylan’s work, the basic structure. I loved this song the first time I listened to this CD, and I love it more and more each time I put it on. Check out these lyrics: “I can tell the way you nurse that drink you’ve had a rotten year/I can’t touch it anymore, but I still like to hang out here/I take it from your screams he doesn’t love you anymore/So you’re saying it’s all over, but it’s been all over before.” And these: “I’m closer to the day when Father Time shows me the door/I didn’t cry when it was over/It had been all over before.” I just can’t get enough of this song. It’s one of those wonderful tunes that simultaneously makes me happy and brings tears to my eyes.

“Darling Let Your Free Bird Fly” is a bluesy song full of references to all sorts of musicians, including Mick Jagger, Keith Richards, Hank Williams, John Lennon, Bob Dylan, Elvis Presley, Jerry Lee Lewis, Sting and Ronnie Van Zant. The David Lee Roth reference cracks me up (adding “Scooby Doo” to his odd little scat in “I Ain’t Got Nobody”). And the title is a reference to the song that is still (usually jokingly) requested at concerts of all kinds. And the next song, “God Part III,” has a reference to John Lennon’s “God,” in the title and also in the line, “I believe in Beatles” (playing on John’s “I don’t believe in Beatles”). The title is Part III because U2 has a song titled “God Part II,” which is also referring to the John Lennon song. In that one, Bono sings, “I believe in love,” which Tommy Womack also sings in “God Part III.” “God Part III” is one of the best songs about Jesus I’ve ever heard, and appropriately Womack chooses a classic country style to tackle the subject. “The sermon on the mount is a treasure to behold/Not a word is wasted, every line is gold/It should be required reading for every girl and boy/It’s one part of The Bible I actually enjoy.”

When “I Almost Died” began, I didn’t expect to be singing along to it, but within two minutes I was. This album is so ridiculously strong. “I almost died, I almost died/The lord or the devil nearly had my hide/Everything ground to a halt inside/God in heaven, I almost died.” Suddenly there is a live track, which Tommy Womack introduces, “This is a work in progress called ‘Nashville.’” He delivers it in a spoken word style, with a beat jazz vibe. And yeah, it’s perfect that this is a live recording. I can’t imagine a studio rendition; it wouldn’t have the right energy, the right vibe, the right honesty. You know? It’s great that we hear the audience laughing, hear their reactions to lines like “Nashville is boiling over, people/Astronauts can see us from space/Spill a glass of expensive wine in the front yard/And watch a condominium sprout up in its place” and “Writing songs by committee is like making laws or sausage/You don’t want to see it being done/It’s best you just don’t know.” And I dig the female backing vocals. Holy shit, this is a good tune. “Nashville” was written by Tommy Womack, Will Kimbrough, Lisa Oliver Gray, Paul Griffith and Matt Fell.

“Hot Flash Woman” had me laughing out loud. “She’s a hot flash woman, wearing me out/Baby, won’t you turn that furnace down/Tossing and turning, wicked and strange/Hot flash woman feeling the change/She looks at men who could be her son/Gotta have chocolate, I gotta run/Can’t show skin, can’t get to sleep/My baby’s losing what she can’t keep.” I have to remember to play this song for my girlfriend. Will she laugh or slap me? Either way, it will be fine. She’s not quite there yet anyway, but, bugger, we are getting older. How are you doing? “Hot Flash Woman” was written by Tommy Womack and Lisa Oliver Gray. This album then ends with a sweet and pretty folk tune titled “It’s A Beautiful Morning.” Am I mad, or is there a bit of “On Top Of Old Smokey” to this? “It’s A Beautiful Morning” was written by Tommy Womack and John Hadley. “Wherever you’re going, I’m on your way.”

CD Track List
Namaste is scheduled to be released on June 24, 2016.
Posted by Michael Doherty at 5:19 PM