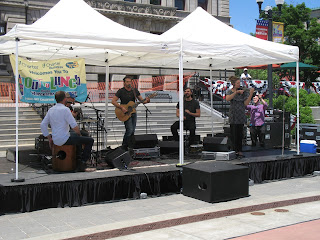 The Out To Lunch concert series in Worcester, Massachusetts kicked off its seventh season with a show by Adam Ezra Group on June 23rd. The show started at 12:15 p.m., with a couple of speakers, including Councilor Kate Toomey, who said, "We're a world-class city that does things in a world-class way." Well, I don't know about that, but I certainly appreciated the live music. And it was a great day for it.

Adam Ezra Group took the stage at 12:21 p.m., opening the first set with "Come On Over," a song from the band's most recent studio release, Songs For A Movie. After "Drive," Adam mentioned the group of children dancing in front. It was a fairly large group of young kids, but they stayed within the bounds of a circle drawn in blue chalk. After the third song of the first set, city manager Ed Augustus interrupted the music to talk about a new World War II memorial and a Civil War memorial. For a moment, I worried that this was going to be the way of things for the afternoon, but he was the last politician to speak, and the band quickly got back into the music, playing "Let Your Hair Down," followed by "Takin' Off." The first set ended with a good cover of James Taylor's "Sweet Baby James," which Adam performed solo. The first set was short, and ended at 12:49 p.m. During the set break, the crowd was treated to a performance by the Imperial Lion Dance Troupe.

The second set started at 1:16 p.m. with "Ease It Down Right," with Adam on harmonica. The group of kids had disappeared, perhaps devoured by the lion. That was followed by "Steal Your Daughter" and then "She's Just A Girl," the latter a request from someone in the audience. They did a couple more from Songs For A Movie: "Becky" and "Sprig." As with the first set, The Adam Ezra Group ended the second set with a cover, this time a really sweet rendition of The Beatles' "Let It Be." The show ended at precisely 2 p.m. There was no encore. After the show, Adam signed CDs for a crowd of fans who gathered at the merchandise table.

Set I
Set II
Here are a few photos from the show: 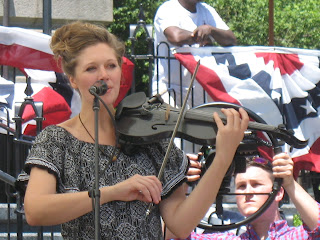 The Out To Lunch concert series takes place on the Worcester Common Oval, just behind the City Hall at 455 Main St. By the way, parking sucks. The library lot is nearby, but half of it is permit parking, and there were no other spots when I pulled in. I ended up at a meter on Main St. several blocks away. The meters only allow you two hours, so at some point you'll have to feed yours. I chose the set break, which meant I missed a bit of the performance by the Imperial Lion Dance Troupe.
Posted by Michael Doherty at 9:30 AM