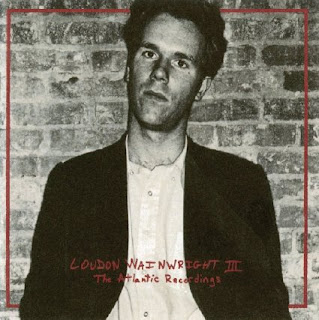 The song that first turned me onto Loudon Wainwright III was “Dead Skunk,” from his 1972 release, Album III (I had it on a Dr. Demento compilation cassette in the mid-1980s). What initially struck me was his sense of humor – obviously, as that song was on a compilation of so-called novelty songs. But the more I listened to him, the more I appreciated his intelligence and wit. And that wit is in strong presence on the tracks of the compilation The Atlantic Recordings. Check out “Glad To See You’ve Got Religion,” for example, with lines like “I’m glad to see you’ve straightened all your lines/And you’ve evened out your odd.” This disc contains two complete albums, his first two, plus a previously unreleased bonus track. These tracks are more in the folk realm than some later releases, both of these albums being solo acoustic gems, with just vocals and acoustic guitar, showing what a talented singer/songwriter he is. This CD includes liner notes written by Peter Fallon for an earlier edition.

The first, self-titled, record opens with “School Days,” a look back at youth (interesting that on the first track on his first record he was already delving into the theme of aging), with some great lyrics. These lines always stand out for me: “Blaspheming, booted, blue-jeaned baby boy/Oh, how I made them turn their heads/The townie, brownie girls, they jumped for joy/And begged me bless them in their beds.” It’s an excellent song. One of my favorites is “Glad To See You’ve Got Religion,” which is hilarious, and is delivered with this great serious folk energy. Check out these lines: “I’m glad to see you’re standing on your head/And you’re chopping with your sticks/I’m glad to know your psychic power/Is being put to proper use/I’m glad to know you don’t discharge a drop/Of your procreative juice.”

“Uptown” is a song about taking a break from poverty and checking out what the other half has to offer. Improving one’s social standing by doing away with the bedbugs. “I’m getting sick of the slums/I’m tired of dodging the bums/And all the freaks are freakin’ me out.” This one mentions Shakespeare in the line “Go and see a Shakespeare play” (a couple of other songs on this disc contain Shakespeare references). Often a song’s opening lines will make me laugh out loud. Such is the case with “Four Is A Magic Number,” which begins “Four is a magic number/But then again so is five.” And so with “I Don’t Care,” which opens with these lines: “I think you will be happy to know/I don’t love you no more.” That one has a bit of a bluesy vibe. Check out these wonderful lyrics: “I know that you would like to think/That seeing you puts me in the pink/But, baby, you are wrong/I really couldn’t care less/And I may as well confess/That little tune I wrote about you last winter/It was a lousy song.”

Another song from the first record that I love is “Movies Are A Mother To Me,” partially because of my love of films, but particularly because of these lines: “Sometimes I am my own enemy/Sometimes my own enemy it is me/Then my enemy and me go see a good movie/We come out friends again.” The way he sings this one makes me think of certain material by the Violent Femmes. His first record then concludes with “Bruno’s Place,” a song that includes a character named Rufus. At that point, his son Rufus was a few years away, but would be mentioned in songs like “Rufus Is A Tit Man.”

Loudon’s second album on Atlantic, Album II, came out the next year, 1971, and features all original material, with one exception: “Old Paint” (also known as “I Ride An Old Paint”). It opens with “Me And My Friend The Cat,” a somewhat silly song that begins with these lines: “Me and my friend the cat/Into the night we sat/We were sitting at speeds/Known only to few/Incredible distance we traveled, us two.” It’s followed by “Motel Blues,” a song about getting a girl up to his hotel room, with him promising to write a song about her on his next LP. Well, he clearly followed through on that promise. “Chronologically I know you’re young/But when you kissed me in the club/You bit my tongue.”

“Suicide Song” is another that had me laughing with the lines, “When you get the blues and you wanna shoot yourself in the head/It’s all right/It’s all right/Go ahead.” “Suicide Song” contains a reference to Hamlet in the lines “When you tire of worldly toil/Shuffle off this mortal coil.” Those lines refer to part of Hamlet’s most famous speech: “To sleep, perchance to dream: ay, there's the rub,/For in that sleep of death what dreams may come/When we have shuffled off this mortal coil,/Must give us pause.” “Old Friend” contains a reference to Romeo And Juliet: “You try to beg and steal and borrow/Yesterday’s sweet parting sorrow/You hold it over my head like a rusty axe” (a play on “Parting is such sweet sorrow/That I shall say good night till it be morrow”).

One of my favorite tracks from this record is “Saw Your Name In The Paper,” a look at the drive for fame, and the reaction of others to those who achieve it. “Maybe you’ll get famous/Maybe you’ll get rich/It’s all right, don’t be afraid/Lots of us got that itch.” I’m also really fond of “Winter Song,” the second record’s final track. It makes me think of the winter two years ago that my friends and family back east suffered through. “One day this weary winter will be gone/Don’t be fooled, it won’t be gone for good.”

This CD ends with a bonus track, “Drinking Song,” which was previously unreleased. “When drunks aren’t drunk they thirst for drink/Elephants are gray not pink.”

CD Track List
The Atlantic Recordings was released on June 3, 2016 through Real Gone Music.
Posted by Michael Doherty at 4:13 PM