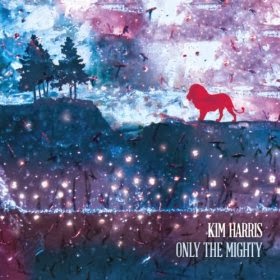 Kim Harris’ debut full-length album, Only The Mighty, showcases her enormous vocal talents as well as her ability on piano. The album also demonstrates her songwriting abilities, as these are all original tunes. This is an album that I enjoyed the first time I heard it, but which I appreciate more and more each time I listen. It’s an album you’re going to want to enjoy without distractions.

“In The Woods,” the first track, has a playful, catchy rhythm that I really like. Sure, the song’s opening line gives you the sense of a typical folk music theme, “In the woods, I find peace.” But it’s not a typical folk tune. This song goes in some surprising directions lyrically (“frozen letters under pine cones in ice”). And of course it’s all about her wonderful vocals.

“The Weight Of It All” is driven by piano and vocals, and creates an interesting and compelling character with lines like “I was born to a youngster as a nameless baby” and “When they woke me at 3 a.m. to tell me she was leaving/And I don’t remember anything, but the sounds of her breathing.” It is then that the drums come in forcefully, determinedly with a steady pounding. I sort of expect the song to burst into an even higher plateau at that point. It doesn’t really do that, but the drums do give the song a sort of urgency, actually working to draw us in further.  The drums fall out again a little later, the song relaxing a bit, the focus returning to the emotion of the vocals.

“Poet Hearts” is a beautiful song. I love the combination of piano and pedal steel. Of course, it is really the vocals that are at the center of the song’s beauty. “Hoping for a parachute to get down tonight/We’ve got all the time.” Her gorgeous vocals are powerful, yet intimate, a combination that really works on the listener’s emotions.

“If I So Desire” is another beautiful track driven by piano and vocals. It opens with these lines: “I thought I was an ocean/No one reaching me for miles/I thought I was a sundial/Only blocking out the light/I thought I had no answers.” I love the way Kim Harris plays with pauses in this song, each breath seeming deliberate and meaningful, letting a thought hang for a moment. Like after “I met you in the evening/The evening was the end.”

Kim Harris follows that emotional song with “Oh Lion,” a lighter tune with a more happy sound that I totally dig. Jay Needham provides a second set of vocals on this track, sometimes singing with her, sometimes echoing her. “Oh lion, I love you/Oh lion, stay bold/You rummaged through rubble looking for luck/But came up with handfuls of gold.” This is actually one of my favorite tracks.

“Feast For The Mighty” is a soft, pretty, sweet tune, the acoustic guitar and vocals both having a comforting effect. This is one of those songs that somehow tells you just by its sound that things are going to be okay. “Where they hold a feast for the mighty/And a seat for the joy.” This is one of my favorites.

The CD’s title comes from a line of its final track, “We Will Revel”: “When all else have fallen away, only the mighty remain.” The song begins with piano and vocals. Then a couple minutes into the song, drums and an electric guitar come in. I really like that brief section where the guitar takes the lead spot.

Kim Harris is based in Halifax.

Only The Mighty was released on February 25, 2014. I am looking forward to hearing more from this singer/songwriter.
Posted by Michael Doherty at 9:29 PM