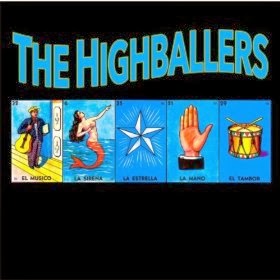 Just a year ago The Highballers released Soft Music And Hard Liquor, a CD of mostly foot-stomping country tunes. And now their new, self-titled release, features more good country rock from the country’s capital. Yeah, these guys are based in Washington, D.C., which surprised me when I first heard them last year. This new album is full of upbeat, fast-paced country rock tunes, with both male and female vocals. Victoria Patchen takes lead vocal duties on “Lula’s Gone” and “I’ll Break Something More Than Just Your Heart” (the latter being my vote for the best song title of the CD). Most of the album’s tracks were written by Kendall Jackson.

They kick off this CD with “Fire And Smoke,” a seriously great country rock song. It has a bright feel, but there is also kind of a nice bittersweet nostalgic feel to this one, mainly in the vocals. Here is a taste of the lyrics: “I fell in love with April/When I was barely seventeen/I thought I'd met the girl of my dreams/Daddy, he did warn me/Boy, don't get carried away/Better save some fight for another day/Oh, but passion Lord how it burned/He knew someday I would learn/When the smoke cleared/I would dry my tears/I got lost in the fire and smoke.” There is a nice blending of male and female vocals, and I really like the energy in the vocals and guitar, particularly at the end.

“Love Will Find You”

“Love Will Find You” begins as a softer, acoustic tune. It then kicks in as one of those wonderful, wistful country tunes. The vocals, again, are really good, particularly when they blend on the chorus. There is a sort of sad feel to it, but the song is ultimately positive, with lines like “Love will find you/Blows in like a hurricane/You know there's going to be some rain/But love will find you.” This is just a really good song, and is my personal favorite on this album.

“Down This Road” is more on the rock side than country, with a heavy driving beat, a snarling electric guitar, and a somewhat angry delivery to the lyrics. “My life is filled with pain and sorrow/I barely make it day to day/Going to see what comes tomorrow/Deal with pain in the same way/Because I've been down that road before.”

“King Of The Plains”

“King Of The Plains” at first feels like one of those delightful country tunes that is a character sketch. At times it has that rhythm that makes you think of being out riding on the range. But this song has strange twists in the lyrics, with a spaceship landing and crushing the guy's tractor. (Oddly, this is the second country album that I’ve reviewed this week that included a song about spaceships and aliens.) One of the elements of this song that really makes me love this one is the backing “Oooo” vocals.

“King Of The Plains” was co-written by Elliott Hoffman and Kendall Jackson.

I love a good drinking song, and country music is so good about providing them. “Can’t Stop Drinkin’” is one of those perfect drinking-and-dancing-at-a-bar tunes. It’s a song about one having the correct priorities. Check out these lyrics: “Baby, I’ll watch the kids if you want me to/But don’t be gone for long/Because I’ve got some drinking to do.” The way one line is sung – “I can’t take another minute” – reminds me of Los Lobos. (Let me know if you hear that too.) This song features Bobby Birdsong on pedal steel, and Jackson Edwards on harmonica. “I stopped going to church, but I can’t stop drinking.” Amen.

“I Want You Back”

With the title “I Want You Back,” you might expect this to be a song about a man pining for a lost love. But no, this one will surprise you. Here are some of the lyrics: “I want you back, like you used to be/A total stranger to me/ I'd trade the good times that we had/And go back to being lonely, it couldn't be this bad.”  And with those lyrics, the other surprise is that this song is a fast-paced, bright little number, and done as a duet. It’s completely fucking wonderful. He sings to her, “Girl, our problems are a direct result of you.”

“I’ll Break Something More Than Just Your Heart”

“I Want You Back” is followed by another great anti-love song, “I’ll Break Something More Than Just Your Heart.” Here is a taste of the lyrics: “Sometimes late at night I might forgive you/Sometimes that I think that you'll be true/Well I'm wishing and I'm prayin'/That these stupid things I'm sayin'/Don't signify that I'd still fall for you.” This one was written by Ed Masley.

The Highballers was released on January 11, 2014 on Woodshed Records.

Posted by Michael Doherty at 7:37 PM