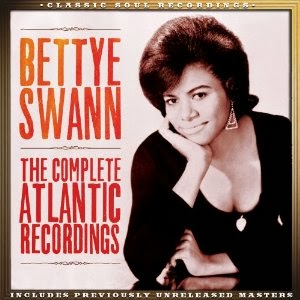 Bettye Swann has a great voice, one that is perfect at expressing hurt and ache and hope. She began her recording career in the mid-1960s, recording for Money, where she had a hit with “Make Me Yours,” and then for Capitol Records, where she had a hit with “Don’t Touch Me.” She then signed with Atlantic. Bettye Swann’s The Complete Atlantic Recordings are tracks recorded in the early to mid-1970s, several of which were previously unreleased. These were all singles, as she didn’t cut an LP for Atlantic. There are some excellent tracks in this collection. And though it’s Bettye’s voice that really drives these songs, there are also some great backing vocals, giving these tunes a slightly more joyous feel. (For example, listen to “I’m Not That Easy To Lose.”) The tracks are presented in basically chronological order by recording date. Bettye Swann quit the music business in 1980 (though she came back to perform once in 2013).

“Victim Of A Foolish Heart”

The first thing that strikes me when listening “Victim Of A Foolish Heart,” this collection’s opening track, is that Bettye Swann has a beautiful voice. There is a sweetness to her vocals, but also heartache. In this song she urges her love to stay away from his ex who has returned to get him back. “Don’t be the victim of a foolish heart/Don’t let her lies get next to you/She’s just trying to tear us apart/She’s trying to make me her victim too.” There is a great, brief instrumental moment toward the end, with a wonderful cry from the horn. This was the first single she released on Atlantic.

The flip side to “Victim Of A Foolish Heart” is actually an even better song. Titled “Cold Day (In Hell),” it builds beautifully, and has a great energy. “There’ll be a cold day in hell when I stop loving you.” These two tracks were recorded in March of 1972.

Bettye Swann’s next single yielded the absolutely wonderful “I’d Rather Go Blind,” one of my favorite tracks in this collection. You completely believe her when she sings, “I’d rather go blind than to see you walk away from me.” Interestingly, this was the flip side. The A side is “Today I Started Loving You Again,” a song co-written by Merle Haggard, who released his own version on The Fightin’ Side Of Me in 1970.  These two tracks were recorded in the fall of 1972 and released as a single in 1973. The single reached #46 on the Billboard Hot 100, and #26 on the R&B chart.

Another excellent rack is her rendition of the Goffin/King tune “Yours Until Tomorrow.” Listen to the incredible emotion in her voice as she sings, “My heart is overflowing with emotions I just can’t control/I know there’s someone that you’re bound to/But tonight I just can’t tell right from wrong/So let me be yours until tomorrow.”

“The Boy Next Door”

Things turn funkier with her 1974 single, “The Boy Next Door.” There is something a bit tougher about her vocals on this one, and something brighter in the overall sound. It’s a more fun track, written by Phil Hurtt and Tony Bell. I’m surprised that it reached only #71 on the R&B chart. Its flip side, “Kiss My Love Goodbye,” is a really good tune, also written by Hurtt and Bell.

Its flip side, “Doin’ For The One I Love,” is probably the most fun and happy of the songs presented here. It definitely brings a smile to my face every time I listen to it. How did this single reach only to #83 on the R&B chart? That’s crazy.

This CD contains several previously unreleased tracks, including “I Feel The Feeling,” which is kind of a fun tune, and “Either You Love Me Or You Leave Me,” a slower tune about a woman who is hurt and needs her man to make a choice.

In her rendition of “This Old Heart Of Mine,” she includes a spoken word intro about the song, and why she decided to record a slower version. "Is there anybody out there tonight that ever really took the time to listen to the lyric of this once-big hit song? Well, recently I did, and was so moved by it that I'd like to slow it down and let you hear what I felt." The Isley Brothers had a hit with this one in 1966.

The unreleased tracks also include a really good, powerful rendition of “Suspicious Minds,” the song Elvis Presley made a hit. Bettye Swann's version has a great vibe. “The Jealous Kind” also has a good feel about it, with a bit of country.

The Complete Atlantic Recordings was released on January 7, 2014 through Real Gone Music.
Posted by Michael Doherty at 5:47 PM