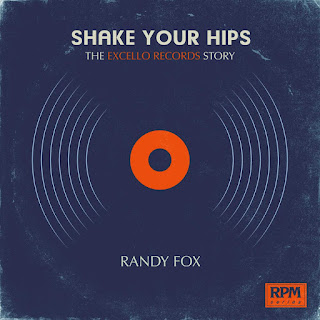 In 2017, I was fortunate enough to catch a set by Lazy Lester at the Simi Valley Cajun & Blues Festival. It was a treat to see that phenomenal blues player perform, his set being a highlight of that festival, as well as a highlight of my concert-going experiences that year. He was eighty-three years old. A little over a year later, Lazy Lester was gone. In the 1950s and 1960s, Lazy Lester released several singles on the Excello record label, that label being the subject of the second book in the RPM Series, Shake Your Hips: The Excello Records Story, written by Randy Fox. This volume follows World Domination: The Sub Pop Records Story. Each volume of this series will explore the history of an important record label. This volume delves into the world of Excello, a blues label founded by Ernie Young in Nashville, as well as related labels such as Nashboro and Nasco.

Shake Your Hips gives us a bit of background on the music scene in Nashville in the first half of the twentieth century, as well as some biographical information on Ernie Young, before getting into the origins of Nashboro Record Company, Young’s first label, which focused on gospel. At the time, 1951, there wasn’t much competition in the gospel label realm, and Ernie Young recorded the discs in his record store, at first moving stacks of records and furniture out of the way, and then eventually constructing a permanent studio in the building. When he branched out into rhythm and blues, the Excello label was born. The book contains a lot of information on those early sessions and the artists who recorded for Excello, including Larry Birdsong, Arthur Gunter, Lightnin’ Slim and Lazy Lester. And of course, there is plenty about Slim Harpo, including some interesting details on the recording of “I’m A King Bee,” as well some great information behind his later cover of “Folsom Prison Blues.” Reading about it all makes me want to hunt down those singles (though I’m sure I couldn’t afford them). There are many fascinating stories here, of course, including that of The Marigolds, a group that formed in prison and went through lineup changes when members were paroled (a strange way to lose band members).

A good deal of Ernie Young’s business was done through the mail, with a particular interest coming from folks in the UK, including a young Keith Richards. Randy Fox writes: “Richards was not the only British fan entranced by the sound of swamp. A new generation of British music fans was hungry for American records with the right feel and energy. Hits didn’t matter; did the record move them? In addition to devouring both sides of forty-fives, labels were intensely studied, lists were made of writing and production credits, and the tiniest details were noted” (p. 83). I love the passion described here, that excitement. It’s like when we were kids and getting a new record really meant something. We did study them, poring over the liner notes, wanting to learn as much as possible. Do kids still experience that? I certainly hope so, but I worry that in these times of downloading music, something has been lost. They should read this book. That chapter on the British Invasion includes early examples of covers those bands recorded, such as The Rolling Stones’ version of “I’m A King Bee.” And it was The Kinks’ version of “I’m A Lover, Not A Fighter” that first turned me onto the song originally recorded by Lazy Lester.

The book follows the Excello story beyond the involvement of Ernie Young, with details on the folks who ran the company after his retirement. And there is information on the label’s end. It’s remarkable that a single radio station could affect sales of records so strongly, as was the case with WLAC. The story of the label’s end continues in the book’s epilogue, with information on AVI buying it and making changes that caused key personnel to leave. But also mentioned is the later surge of interest with important re-issues on CD, certainly a bright side, as this music is just too damn good to ever let go out of print. The book contains several pages of photographs, including a trade advertisement for Excello Records.

Shake Your Hips: The Excello Records Story was released on November 20, 2018  through BMG Books. By the way, the book’s title comes from one of Slim Harpo’s singles, “Shake Your Hips,” released in the mid-1960s.
Posted by Michael Doherty at 8:17 PM