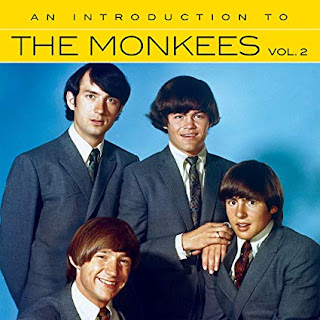 It seems odd to me to have a second volume to an introduction. And it’s also fairly late in the game to offer an introduction to The Monkees. Nevertheless, the collector in me had to purchase the new compilation, An Introduction To The Monkees Vol. 2, which contains not only some old favorites, but also the band’s best recent song, “Me & Magdalena.” Plus, after Peter Tork’s passing, I just needed to hear some tracks from the first band I ever loved.

My personal favorite Monkees album is Pisces, Aquarius, Capricorn & Jones Ltd., and this compilation opens with a track from it, “Words.” I love this song. Okay, yes, I love nearly every Monkees song, but this one in particular has been one of my favorites since I was a kid, and it’s fun to shout along to it. I’ve always enjoyed the way Micky Dolenz and Peter Tork trade lines in the verses. That’s followed by “Mary, Mary,” a fun song from More Of The Monkees, which was the first record I ever got. Though Micky sings this one, Mike Nesmith wrote it.

In 1986, The Monkees reunited for a special concert tour. A compilation was released that year. Titled Then & Now… The Best Of The Monkees, it contained three new tracks, including “That Was Then, This Is Now,” which was also released as a single. Only two of The Monkees perform on this track: Micky Dolenz and Peter Tork. It’s a cheerful, kind of bouncy tune, with a sound that clearly indicates it as a product of the 1980s. It’s a song that I appreciate a whole lot more now than when it was first released. That’s followed by “The Girl I Knew Somewhere,” which was originally released as the flip side to “A Little Bit Me, A Little Bit You.” While I love both of those songs, I think “The Girl I Knew Somewhere” is the better track, and am surprised it wasn’t the A side. It is another penned by Mike Nesmith. Also written by Mike Nesmith is “You Told Me,” which was the lead track from Headquarters, the first album to feature the band members playing nearly all the instruments.

The Monkees television show was on every day after school when I was a kid, and I watched it every day. One of the segments I just couldn’t get enough of was “Goin’ Down.” The song is just so fucking cool, and Micky’s vocal performance is impressive. Have you ever tried to sing this one? It’s not easy. The single version of this insanely fun song is included on this compilation. That’s followed by the single version of “Listen To The Band,” a tune that was included on The Monkees Present, and one that gets in my head almost daily. Mike Nesmith wrote this one, and it’s fantastic.

So after the success of both Then & Now… The Best Of The Monkees and the 1986 reunion tour, the band recorded a new studio album, the first in seventeen years. Titled Pool It! (one of the worst album titles ever), it featured the hit “Heart And Soul,” which is included here. This one has really grown on me over the years. That’s followed by a song I completely fell in love with the moment I first heard it, “Me & Magdalena,” a beautiful song from the band’s 2016 release, Good Times! The vocal performances by Mike and Micky are gorgeous and moving. This is one of the best songs the band ever recorded. The compilation then concludes with “Look Out (Here Comes Tomorrow),” a seriously catchy song written by Neil Diamond and included on More Of The Monkees.

CD Track List
An Introduction To The Monkees Vol. 2 was released on October 5, 2018 on Rhino Records.
Posted by Michael Doherty at 3:05 PM