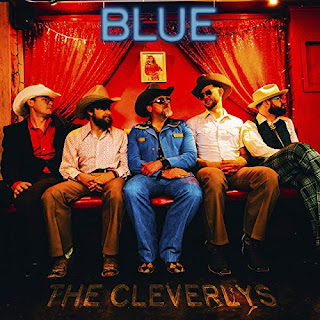 Like the Ramones, the members of The Cleverlys have all taken the name of the band as their last name; and so we have Digger Cleverly on acoustic guitar and vocals; Ricky Lloyd Cleverly on upright bass, kick drum, vocoder and vocals; Sock Cleverly on fiddle and vocals; DVD Cleverly on banjo and vocals; and Cub Cleverly on mandolin and vocals (okay, I’m beginning to think their first names might be invented as well). Supposedly they’re based in Arkansas, but who knows? I mean, with these fake names, can we trust any of their biographical information? But none of that matters, for the music is totally enjoyable. It is bluegrass with a sense of humor, as the band delivers bluegrass versions of pop and rock tunes. Yeah, the songs are covers, but some of the material is new to me, as I haven’t heard the originals. So I could take those tracks sort of at face value. You know? Like the first track, for example.

The album opens with “Baby,” a song originally done by Justin Bieber. I have to admit, the first time I listened to this disc, I had no idea that this was a cover. While I had heard of Justin Bieber, I’d never actually listened to him (and no one has given me a convincing reason to change that). My guess is that his version couldn’t possibly be as cool and surprising as this bluegrass rendition by The Cleverlys. When all their voices join in, the song is lifted to a wonderful place, and then that “baby, baby, baby” part is sweet, almost gorgeous. Seriously. That’s followed by another song I hadn’t heard before, “Milkshake,” which was originally done by someone named Kelis Rogers. While writing this review, I attempted to get through the original version, but could stand only thirty or forty seconds of it. However, I am totally digging The Cleverlys’ take on it. They deliver a playful rendition, featuring some nice work on fiddle. I haven’t had a good milkshake in a while, and I am developing a craving.

I love the fun vocal play in their version of “Blue (Da Ba Dee),” the disc’s title track (and a song I feel I might have heard once before, as the chorus feels familiar). There is something delightfully silly about this, and it is certainly raising my spirits. I appreciate the joy and humor behind this cover, and behind this entire project. Plus, this song features some nice stuff on mandolin. “I have a girlfriend and she is so blue.” That’s followed by “She’s Not There,” the first song on this album that I actually already knew and loved. This was always one of my favorite Zombies songs, and these guys do a wonderful rendition of it. Then they give us a cover of “Wait A Minute,” a song by bluegrass band The Seldom Scene. Yeah, it’s the first song on the album that was originally bluegrass, though the disc’s liner notes strangely credit the song to the people who wrote that awful Pussycat Dolls song, also titled “Wait A Minute.” Anyway, there is something undeniably beautiful about this rendition, a slow country bluegrass song, particularly the work on fiddle.

“Party Rock Anthem” is another song I wasn’t at all familiar with. I’m guessing I would hate the original (it is by a group called LMFAO, a name I completely despise), but here it is kind of goofy and enjoyable, with a nod to Led Zeppelin’s “Immigrant Song.” That’s followed by Beyoncé’s “Irreplaceable.” Yeah, it’s silly, and I can’t help but laugh as this song begins, but the thing is, these guys can play, these guys can sing. Now I wonder if they can write too. I’d love to hear some original material on their next release. Anyway, they follow “Irreplaceable” with a good rendition of 4 Non Blondes’ “What’s Up,” a song I liked from the moment I first heard its original version back in college. That’s followed by another song that I love. The Proclaimers’ Sunshine On Leith is still one of my absolute favorite albums. The most famous (but not the best) track on it is “I’m Gonna Be (500 Miles),” in part because of its use in Benny & Joon. Here The Cleverlys deliver a fun rendition. Sure, it takes me a moment to get used to the lack of that drum beat, but this version totally works and features some great stuff on fiddle.

Things then get really weird. They cover “Oh Death,” a traditional song most famously done by Ralph Stanley. But whereas the band gives us bluegrass renditions of pop songs, here they give us a strange pop rendition of a folk song. They stand the tune on its head, and give us some kind of electronic pop version, giving us a sound completely unlike everything else on the album. These guys clearly like surprising us. The disc then concludes with “The End Of The Record,” which is not a song at all. It is just the guys fucking around, imitating characters from various movies and television shows. It is totally pointless, and something I would have cut. I recommend taking the disc out before this track.

CD Track List
Blue is scheduled to be released on March 22, 2019 through Mountain Home Music Company.
Posted by Michael Doherty at 4:15 PM