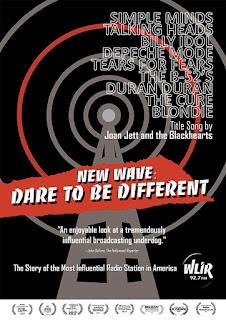 When I was growing up in Massachusetts, the main way to learn about new music was the radio. Radio stations had identities, and you developed your own identity partly through the music you enjoyed. Each station had its own flavor, its own style. There were cool stations (WBCN and WAAF) and uncool stations (WXKS and WSRS), and on the way to school you’d do your best to get the bus driver to switch to one of the better stations. We were excited when we heard something new that moved us or rocked us. I remember, for example, hearing Joan Jett’s “I Love Rock ‘N’ Roll” for the first time when I was nine years old and needing to hear it again and again. The DJs seemed to be just as excited about the music as we were. New Wave: Dare To Be Different is a documentary film about WLIR, 92.7 FM, an influential station in Long Island, a station whose employees were clearly excited about the music they were playing, music that was not being played on other stations.

Interestingly, the film begins with footage of the final moments of WLIR, as the station was going off the air. Then we hear a snippet of a U2 concert at Nassau Coliseum where Bono mentions the radio station, receiving a big cheer from the crowd. Ah, from the sad end to the wonderful heights of the station’s peak, all in the film’s opening moments. WLIR was a station with a somewhat weak signal and a completely loyal fan base. It is a station that introduced its audience to a lot of new bands, such as U2, The Pretenders, The Smiths and XTC. Seymour Stein (founder of Sire Records) says, “If I had found LIR when I was thirteen, I would have felt that I found Disneyland, but it was a radio station.” Well, that’s it exactly, except the station was so much better than Disneyland.

Many of the station’s disc jockeys are interviewed, including John DeBella, Ben Manilla and Andy Geller. They talk about the old, crummy equipment the station had, which forced them to be creative. And though they talk about how the place was a shithole, it’s all said with a tremendous amount of affection. Fans of the station mention some of the work that was involved just to get the station in, as the signal would go in and out. Denis McNamara, the program director, who started working there at the age of 22 in the mid-1970s, provides a bit of the history of the station. He also talks about hearing music coming out of England, and how it was difficult to get the records and to fit them in with the rock the station was playing at the time. But big radio stations were taking away advertising dollars, so WLIR switched to a different format on August 2, 1982.

As excited as the DJs and listeners were about the station, some of the biggest love comes from musicians whose music was played there. This documentary interviews a whole lot of musicians, including Nick Rhodes, Joan Jett, Billy Idol, Thomas Dolby, Tom Bailey, Howard Jones, Debbie Harry, Katrina Leskanich, Chris Frantz, Tina Weymouth and Fred Schneider. Nick Rhodes is kind of adorable as he talks about his first trip to New York. And Howard Jones’ description of the station made me miss working on radio (I would love to be a DJ again, and wish I could just create a station out of my tiny apartment). What is cool is that the documentary also includes interviews with a couple of musicians whose music stopped being played on WLIR when the format changed. Eric Bloom, of Blue Oyster Cult, says, “It was sort of a stab in the heart for our kind of music, because we had a great relationship with LIR, and it just went out the window.”

The film gives us a tour of the location of the station, and provides a lot of great anecdotes about promotions and so on. There is material about new wave music, and what the term means, and why the station didn’t use the term. Plus, this documentary includes so much good music. If you love music, you’ll love this documentary. For it’s not only a love letter to a radio station, but to the music that was played there. And the closing credits sequence features a new song from Joan Jett, “Dare To Be Different.” Very cool!

The DVD includes some bonus material, including more with Denis McNamara, who shows some memorabilia from the station. And there is more footage from interviews with some of the musicians, including Lol Tolhurst (about the beginning of The Cure), Billy Idol (about the problem of having a punk image back then), Nick Rhodes (about WLIR playing Duran Duran’s music and about the video for “Girls On Film”), Curt Smith (about a fan), and Eddie Lundon and Gary Daly of China Crisis (about a particular concert that was recorded by WLIR), plus Ed Steinberg, founder of Rockamerica. The special features also include more from the interviews with the station’s DJs, featuring a lot of great anecdotes and details of life at the station. There is also a brief message from the film’s director about how she got interested in the story of WLIR.

New Wave: Dare To Be Different was directed by Ellen Goldfarb, and was released on DVD on December 7, 2018 through MVD Visual.
Posted by Michael Doherty at 12:45 PM