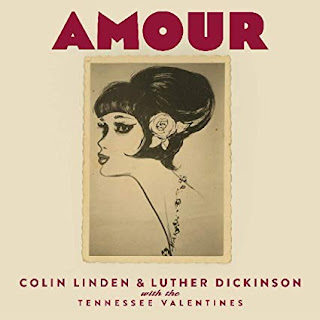 Colin Linden and Luther Dickinson are two talented guitarists with impressive credits, and they’ve now teamed up for Amour, an excellent and totally enjoyable album of covers that focus on romance and love (as its title suggests). The band backing them, called The Tennessee Valentines, is made up of Dominic Davis on bass, Bryan Owings on drums, Fats Kaplin on violin and accordion, and Kevin McKendree on piano and organ. Plus, this album features several special guests, including vocalists Rachael Davis and Ruby Amanfu. This isn’t the first time Luther Dickinson has been involved in a project covering some classic material. Just a couple of years ago he was part of that wonderful tribute to Sun Records, Red Hot. In addition to guitar, Colin Linden plays electric dobro on this release, and produced the album. It’s clear that these guys took a lot of pleasure in this project, and I’m guessing I will be far from alone in taking great pleasure in listening to it.

The album opens with an interesting bluesy instrumental rendition of “Careless Love.” It begins with a sort of haunting atmosphere, creeping up on you like daylight in the desert, and halfway through develops into a strange and strangely pleasant back porch sound. Seriously, by the end it will probably make you happy, something you might not have expected when it began. That’s followed by a cool rendition of Jesse Stone’s “Don’t Let Go.” I first heard this song at a Jerry Garcia Band concert in 1989, and immediately loved it. The rendition these guys deliver has the right amount of rock, the right dose of blues, a great measure of soul, and a lot of pep. It’s fun and loose, turning into a good jam that has at least a couple of people laughing by the end. Rachael Davis and Ruby Amanfu provide vocals on this track.

Colin Linden and Luther Dickinson give us an absolutely wonderful rendition of Jimmy Reed’s “Honest I Do,” its appeal due in large part to Rachael Davis’ vocals, which have a timeless quality and rise beautifully over that steady blues rhythm. “Don’t you know that I love you/Honest I do/Oh, I’ve never placed no one above you/Please tell me you love me/Stop driving me mad.” And damn whoever it was that made her feel “so bad.” The album then returns to “Careless Love,” which is an unusual and interesting choice. This time it has a sweet and easy folk vibe right from the start, and features a gorgeous and moving vocal performance by Rachael Davis. This track is a total gem, with some wonderful stuff on both guitar and violin.

Then Sam Palladio joins them on vocals for a bluesy rendition of “Crazy Arms,” which retains a certain country charm and sweetness in this raw and delicious treatment. At the end, it seems to be going into another song, but then fades out. That’s followed by “For The Good Times,” a song written by Kris Kristofferson. This version establishes a beat before the guitars and bass come in. Then when Ruby Amanfu’s vocals come in, they have a powerful intimacy. She pulls us in as if without effort. “Let’s just be glad we had this time to spend together.” Indeed. Oh, she can melt your defenses, and move even the most soulless of men. This track is another of the disc’s highlights. Both “Crazy Arms” and “For The Good Times” were number one hits for Pay Price.

Things get hopping with a delightful rendition of “Lover Please,” a song that was a hit for Clyde McPhatter in 1962. It was written by Billy Swan, who joins Colin Linden and Luther Dickinson on vocals for this version. What a treat, and reason enough to add this CD to your collection! Rachael Davis provides backing vocals. Then Ruby Amanfu delivers another intimate and passionate vocal performance on “What Am I Living For,” a song written by Art Harris and Fred Jay, and originally recorded by Chuck Willis. This rendition has that classic sound, and features some absolutely wonderful stuff on guitar. That’s followed by a version of Bo Diddley’s “Dearest Darling” that has a great raw vibe, almost like a rehearsal or improvised number. I like music that feels immediate, real. Colin Linden provides vocals on this one. The album concludes with an interesting rendition of “I Forgot To Remember To Forget,” which was written by Stan Kesler and Charlie Feathers and recorded by Elvis Presley. This rendition has a strange, dreamlike quality, which perhaps works well with the idea of forgetting to remember to forget. It’s like a lullaby being sung to one’s self in a science fiction realm, perhaps just before machines put you to sleep permanently, a final and lasting memory. Jonathan Jackson provides the vocals on this one.