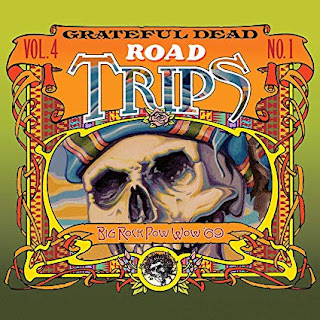 Road Trips Vol. 4 No. 1: Big Rock Pow Wow ’69 contains the complete sets the Grateful Dead played on May 23rd and May 24th, 1969 at the Seminole Reservation in Hollywood, Florida. However, the order of the tracks on this three-disc set is slightly rearranged, with two songs moved from their rightful place on the first disc to the third disc (so as not to break the flow of the bulk of that set).

The first disc contains most of the set from May 23, 1969. By the way, the reason these shows are short (just one set each night) is that the Grateful Dead was one of several bands on the bill, though was the headlining act both nights. There is a brief introduction – “the best group in the universe,” indeed! And the band kicks off the show with “Hard To Handle,” Pigpen on lead vocals. Good, raw, raucous Dead. Man, it must have been something to see them in the early days. This show was in that period when T.C. was also on keys, and you can hear his touches early on. (I should point out here that some set lists from this show indicate that two other songs preceded “Hard To Handle”: “Dancing In The Streets” and “Casey Jones,” but I have not heard any tapes with those two songs.) “Hard To Handle” is followed by the fourth song of the set (the second and third songs are on the third disc), a nearly nineteen-minute “Dark Star” that gets right into a good psychedelic jam. Wow, with only one set, the band doesn’t take long to get into some delicious weirdness (and actually, the second song of the set is “Morning Dew,” but more on that in a bit). But the band basically seemed to live in that strange realm at that time, so it makes some sense that they wouldn’t have to work their way to it. Probably 1969 was the best year for “Dark Star,” and this is a really good rendition. In these early versions, the band used space and silence really well. Things could get quiet at moments, and then explode in bursts of sound, so the highs were much higher. You know? And the song didn’t yet have the weight, the importance it would soon have among Deadheads, so it all feels really free. The band was seeing where they could go, where the song would take them. And here it takes them to some surprising, unusual places. And, man, as much as the band could use moments of silence, these guys could also get seriously loud, until the sound seems to be inside your head playing out rather than inward. And almost immediately after the second verse, the band shifts into “St. Stephen.” This song, too, would become a favorite of the fans, probably already was at this point. It’s a strange, complex, compelling and powerful number, with some fantastic lyrics by Robert Hunter. “Lady finger, dipped in moonlight/Writing ‘What for?’ across the morning sky/Sunlight splatters dawn with answers/Darkness shrugs and bids the day goodbye.” And this early version has the William Tell section, and T.C.’s work is prominent at moments there. “St. Stephen” leads straight into “The Eleven,” and it all flows and moves so well, as Jerry wanted it, music with no beginning, no end, no starts and stops, but rather a continuous ride into some extraordinary world, where we can let go of all superfluous trappings, of notions of what is supposed to be. The guys deliver some interesting stuff vocally here too. And then pound and hammer their way through any remaining walls. What a force this music is! Then suddenly that fun groove of “Lovelight” emerges. This thirty-minute rendition of “Turn On Your Lovelight” concludes the first disc and first show. Pigpen began the show, and he finishes it, the way only he could. The song feels like the greatest party ever. And, yeah, it has a bit of that hands-in-your-pockets rap, but also a whole lot of jamming. This is Pigpen’s vehicle, no question.

Interestingly, the following night the band opens with “Lovelight,” picking up where they left off, because the whole thing was one continuous party anyway, right? And here the band was letting everyone know just that (which perhaps was necessary after that weird introduction, which you need to hear). The band comes out of the gate strong and ready to jam, though this version is a bit shorter, only twenty-seven minutes. After a bit of tuning, the band goes into “Doin’ That Rag,” a song that would be included on Aoxomoxoa a little later that year. It’s kind of an odd, slightly messy version, but still enjoyable. “Tell me the name of the game that you play.” That’s followed by an interesting rendition of “He Was A Friend Of Mine,” a song that is actually titled “Just A Hand To Hold,” as indicated on the back of the CD case. This version begins with a bit of jamming before the vocals come in. But this song for me has always been about the vocals, and they do some nice blending of voices here on the chorus. Some of the work on keys and the groove seem to work in contrast to the lyrics. This version isn’t as sad or heartbreaking as some others I’ve heard. I had a version on tape that could just destroy you. I can’t remember what show that was from. The transition from “He Was A Friend Of Mine” to “China Cat Sunflower” is so smooth, seamless. And there is some impressive, wonderful stuff during this song. And while we are used to “China Cat” going into “I Know You Rider,” here the jam gets crazier, more intense, and the song then segues into “The Eleven.” An interesting journey, to be sure. The band then slides into “Death Don’t Have No Mercy.” Where “He Was A Friend Of Mine” perhaps didn’t have the emotional power it could have, “Death Don’t Have No Mercy” definitely delivers on that level, with Jerry turning in an excellent and passionate vocal performance. And the music finds some great peaks as well. Ah, listen to the ache in Jerry’s voice. Fantastic.

The third disc takes us back to the May 23rd show for a bit, giving us the second and third songs of that set. Actually, it begins with some humorous complaints about the sound from the band (“It stinks, Bear”). Then “Morning Dew” bursts alive with its post-apocalyptic fury and despair. This is a good version, with some fiery peaks and desolate valleys. “I guess it doesn’t matter anyway.” Wild to have this kind of passion so early in the show. The band then goes in a different direction with “Me And My Uncle,” a song that has a slightly heavier sound here than it would later have. We then go back to May 24th for Bob’s famous yellow dog story, told while strings are being changed (the CD liner notes indicate this track is from May 23, but from other recordings I have listened to, that’s incorrect). If you don’t know the joke, well, it’s fitting that “Alligator” follows it. This is a fairly decent version of “Alligator,” and it leads into a drum solo. The solos by Bill and Mickey were always journeys in themselves, and this one interestingly includes some vocals at the end, just before the band moves into a rockin’ “St. Stephen.” This time the band does not do the William Tell part, and instead goes into “Feedback,” which is essentially the “Space” of its day, a strange, monstrous instrumental exploration, sometimes harsh, sometimes frightening. As it drifts off, “And We Bid You Goodnight” emerges beautifully, delivered basically a cappella, with just a touch of percussion. And that’s how the show wraps up.