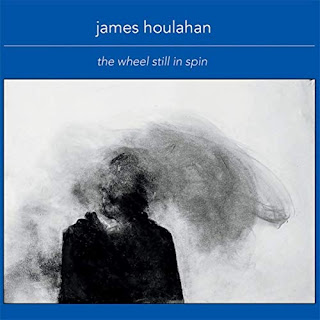 The most foul year on record is 2016, a year that gave Donald Trump the presidency and took Leonard Cohen from the world. Yet, there was a lot of excellent music released that year, including James Houlahan’s Multitudes, an album which showcased his talent as both singer and songwriter. Late last year he followed that extraordinary album with The Wheel Still In Spin, confirming again his power as a songwriter and vocalist. Most of the material on this album is original, written by James Houlahan. Joining him on this release are Fernando Perdomo on keys, bass and acoustic guitar; Danny Frankel on drums and percussion; and Esther Clark on vocals.

The album’s first track, “Let It Go,” opens with the lines, “I’m losing sleep/And listening to/A hopeful broken sign,” and I am immediately on board. There is something beautiful about this song, and something gentle, as he sings, “Let it go, let it go/Let it go, let it go,” with Esther Clark on backing vocals. And check out these excellent lines: “The winds that blow/Through this place/Moan between the stones/They carry you and carry me/Beyond our cage of bones.” This wonderful song features Fernando Perdomo delivering some nice work on keys. Fernando Perdomo, by the way, co-produced the album with James Houlahan. He also released his own excellent CD late last year, Zebra Crossing. “Spirit/Music” then takes us to a more serious, stranger realm from the start, with voices reaching to us across several dreams. Linda Perhacs joins James on vocals for this track. The acoustic guitar works somewhat in contrast to these sounds, providing something of a grounding in a recognized reality. I like that he is taking chances here, venturing into interesting territory. The lyrics for this one were written by James Houlahan and Linda Perhacs, based on the poem “Spirit” by Gregory Curso.

“Faded” has a bit of a Beatles vibe, in the guitar work, and features a passionate and exciting vocal performance. Here is a taste of the lyrics: “A gorgeous moment gone insane/With echoes of a pale design/All these faded dreams/Breaking in my heart/All these faded scenes/Tearing me apart.” I also really like the bass. That’s followed by “All I’ve Got.” There is something haunted about this music, a sound that grabs hold of me, a sound that feels right. Perhaps it’s because of the despair that seems to pervade the country. Even a line about the sunset, “A tranquil sea swallows the sun,” seems to speak to this feeling that it’s all too much and we are powerless to fix it. “All I’ve got is a song for you,” James tells us. Well, that might be enough. It is what seems to help the most these days. “Father Song” is a strange one, for it has a happy, cheerful sound, but is about an impending death. “And down in the sand/I will bury your heart/And scatter your name.” There is a surprising moment in the second half of the song when things fall apart briefly, before that rhythm is restored. I love how this song creates conflicting emotions in me. This is a good song.

The album’s only cover is “Indian Cowboy,” which was written by Joe Ely and was originally included on Ely’s 2007 release Silver City. James Houlahan’s version has a very different feel from Joe Ely’s original rendition (and from Guy Clark’s version). Here we are immediately ushered into a dark and exciting and delicious carnival, fitting with the song’s lyrics. “It was a cold night in Oklahoma/The show was about to begin/And the animals, they were all restless/When the star horse, she broke from her pen.” Does the circus even exist anymore, or has our warped and artificial political landscape replaced it? “Indian Cowboy” is followed by “Stuck In Between,” in which James Houlahan sings “No more games left to play/Optimism had its day.” Yeah, that’s how I feel too. This song is so gorgeous and sad and wonderful and moving. “Make our only dream come true/Do what I can to see you through.” We need to help each other, as best we can, with whatever meager abilities we possess, even if “It’s not enough/It’s not enough.” This song is having a strong effect on me, and is one of my favorites. “Not much sense in looking back/Looking back.”

“Memories Of Outer Space” has a more cheerful sound right from its opening moments, and has an oddly comforting quality. “We hoard all the waste/In terrible haste/And sink the dreams from out the sky.” Then the acoustic guitar in “Circus Dream” seems to emerge from a haze above a lake. I feel calm, like I could drift away on the light wings of this song. Interestingly, just as he sings the word “dream,” the song seems to take on more substance, become more solid, tangible. There is something pretty about “Sunday Song,” the acoustic guitar, those wonderful backing vocals, the gentle percussion. This music seems to speak directly to something deep within us, affecting us on a level that a lot of music never reaches. Then “Taking To The Road” comes on strong, like a slightly twisted band in a roadside joint where the beer is tainted and the women carry knives. Yeah, it’s fun. The album then concludes with “California,” which utilizes the old line “I’m going where the weather suits my clothes.” That line is of course is fitting for a song titled “California.” Honestly, I always figured California is where they were heading when singing that line in songs like “Everybody’s Talkin’” and “Goin’ Down The Road Feeling Bad” (in the latter, it’s “where the climate suits my clothes”). However, by the end of this song, he is saying farewell to California. “Then it’s goodbye to sweet California/Farewell to all the ones I’ve loved/I’ll fade away into this very song/Disappear into the air above.” James Houlahan’s voice here is moving, sounding like he really is about to step away from the world, and his harmonica sounds so haunting and ethereal.

CD Track List
The Wheel Still In Spin was released on September 21, 2018.
Posted by Michael Doherty at 5:32 PM