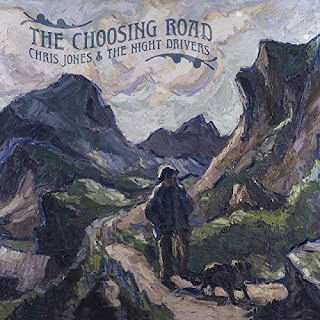 Chris Jones & The Night Drivers are an excellent bluegrass band, delivering some warm and meaningful songs. Their new release, The Choosing Road, features mostly original material, most of that written or co-written by guitarist and lead vocalist Chris Jones. Beside Chris Jones, the band is composed of Mark Stoffel on mandolin and backing vocals, Gina Furtado on banjo and backing vocals, and Jon Weisberger on bass. Joining them on this release are Tony Creasman on drums, David Johnson on fiddle and pedal steel, Liz Carroll on fiddle, Megan Lynch Chowning on fiddle, and Tim Surrett on dobro.

I’m happy that bluegrass seems to be gaining popularity again, because this music raises my spirits, makes me feel that the world is a decent place, despite all evidence to the contrary. These instruments have a cheerful sound, and this album’s opening track, “Your Remarkable Return,” has an optimistic bent that I appreciate. “I’ll admit I dreamed about you/But I swore I wouldn’t dwell on things that couldn’t be/I thought time was a healer/And I believed that I was free.” “Your Remarkable Return” was written by Chris Jones and Jon Weisberger. It’s followed by “Letters To Brendan,” which has a more serious tone and subject, a tale told from the perspective of a young soldier, and features some nice harmonies. “I miss you more than you’d ever know/Not a sign this war is ending soon/I didn’t know Virginia nights could be so cold/More often now my thoughts have turned to home.” This one was written by Chris Jones, Thomm Jutz and Jon Weisberger.

“Looking For The Bridge” is an emotionally engaging song that moves at a good pace, and features some great playing. “And I’m finally giving in and admitting to the truth/Instead of just pretending that I’m not losing you.” Still, there is optimism here; I think that is inherent in these instruments. “And if I stare off in the distance, seeming kind of lost/Just know that I’m looking for the bridge.” Chris Jones begins “I Can’t Change The Rhyme” with some cool stuff on guitar. I dig his vocal performance here, particularly those moments when he dips low. The more I listen to this album, the more I enjoy this track in particular. The band really shines in that wonderful instrumental section at the end, a very cool little jam that hints at what this band must be like in concert.

The album’s only cover is Steve Winwood’s “Back In The High Life Again.” It’s an interesting and unexpected choice, though the original does include mandolin. David Johnson plays fiddle on this track. This rendition is giving me a fresh appreciation of this song. That’s followed by “Nyhan’s Regret.” My body and spirit have always responded to Irish music (for what are probably obvious reasons), and this wonderful instrumental tune lives and thrives in that common ground between bluegrass and Irish folk music. I absolutely love this track, which was composed by Mark Stoffel and Gina Furtado, and features Liz Carroll on fiddle. Then Megan Lynch Chowning joins the band on fiddle for “I’ll Watch Her Sail,” a song with more good harmonies. “And she’ll sail on an easterly wind/The same wind that blew her to me/And I know I can’t stand in her way/So I’ll just watch her sail out to sea.”

“Bend In The Road” is a cheerful-sounding tune to raise our spirits, its opening line reminding us “Sometimes a journey takes a little patience.” There is optimism, there is strength, there is a brighter tomorrow. We all need this now. That’s followed by “I Shouldn’t Even Be Here,” another tune that really works for me, perhaps because of these lines: “The board is clear, let’s start a brand new game/So pop the cork, make a toast/Drink in every drop of this new day/Everything from here on out/Is just another gift that came my way/I shouldn’t even be here.” Perhaps we can adopt that attitude without having to nearly lose everything. I try to refrain from taking things for granted, and am grateful for music like this that helps us through these dark times. There is a whole lot of good in this world, but we need to remind ourselves of that, for sometimes it’s not as apparent as it could be. You know?

“Who You Want Me To Be” has a kind of pretty, sweet vibe right from the start. And there is a humor to this one, its first line being “Somewhere in some other life I mastered almost everything I’ve tried.” I love the honesty of this song, and I love the work on banjo. “I can’t be who you want me to be/I can’t be who you want me to be.” This one was written by Gina Furtado and Chris Jones. Then “Own The Blues” has a kind of laid-back country vibe, with more nice harmonies. This is another of my personal favorites, in part because David Johnson adds some wonderful stuff on pedal steel on this track. And check out these lines: “I know too well those days are gone/In good time, I’ll move along/For now please just allow this dream to last.”  The disc concludes with “Glimpse Of The Kingdom,” which features Tim Surrett on dobro. “When I see someone reaching out to help a stranger/I get a glimpse of the kingdom.”

CD Track List
The Choosing Road is scheduled to be released on March 29, 2019 through Mountain Home Music Company.
Posted by Michael Doherty at 11:58 PM