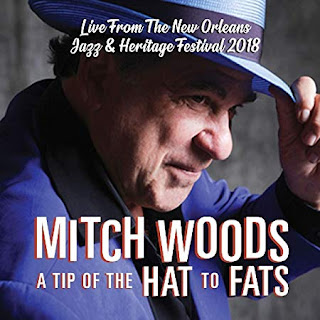 If you love music, then you undoubtedly love Fats Domino. There’s just no way around it. The man possessed that special, magical, undefinable something, and there was a lot of joy to his music. On A Tip Of The Hat To Fats, pianist Mitch Woods celebrates The Fat Man’s music. However, the album doesn’t limit itself to Fats Domino tunes, and is a celebration of Domino’s home town, New Orleans, as well. In the disc’s liner notes, Mitch Woods talks about his love for that city. This is a live album, recorded at The New Orleans Jazz And Heritage Festival on April 29, 2018, six months after Fats Domino’s passing. In addition to songs done by Fats Domino, it includes original material like “Solid Gold Cadillac” and “Mojo Mambo.” The band on this album includes Amadee Castenell on tenor saxophone, Brian Cayolle on tenor saxophone, Roger Lewis on baritone saxophone, Cornell Williams on bass, John Fohl on guitar, and Terence Higgins on drums. By the way, the brief banter between songs is presented as separate tracks, so it’s possible to program your player to just play the music should you desire to do so, something I appreciate.

The album opens with “Solid Gold Cadillac,” which was the title track to a 1991 release by Mitch Woods And His Rocket 88’s. The tune is just a joy, with lots of energy and plenty of good playing, particularly on keys, as you’d expect. Hey, we could all use “a little leg room” and “a bar in the back.” You can hear the crowd getting excited. The Blues Tent must have been rocking. Things keep moving with a hopping rendition of “Down Boy Down,” a song written by Henry Glover and Fred Weismantel, and recorded by Wynonie Harris. This track features some great stuff on sax, and a playful vocal performance. Oh yes, this album should get you feeling good. Then we get “Mojo Mambo,” an original tune dedicated to Professor Longhair.  “If you want to have a ball, you gotta go to New Orleans.” Yeah, it certainly does feel like a Mardi Gras celebration. Mitch Woods plays to the crowd a bit, calling out “Are you with me, New Orleans, Louisiana?” And clearly everyone was with him, as the music is a whole lot of fun. Both “Down Boy Down” and “Mojo Mambo” were included on the 1984 Mitch Woods And His Rocket 88’s release Steady Date. ‘Mojo Mambo” is followed by “Crawfishin’,” a tune that swings and grooves, with some wonderful work on guitar. It’s a party, to be sure. In my mind, the sound of this song is the constant sound of New Orleans, day or night. Maybe that’s because the only time I was ever in that city was for Mardi Gras, but I just have the sense that people there basically dance their way through their lives, a smile on their faces even when they’re mourning. The way life should be, you know?

Mitch Woods then gets into the Fats Domino material, first mentioning that the festival is dedicated to Fats, who had died the previous year. He also says that Fats Domino was an inspiration to him. “So we’re gonna do a whole bunch of Fats for you, You ready for that? Because he will live on forever.” They start with a delicious, faithful rendition of “Blue Monday,” the horns sounding just exactly right. Man, I just love this song, and today in particular this song is striking a chord with me because of its lines “I’ve got to get my rest/’Cause Monday is a mess.” Tomorrow is Monday, and I have to get up at 3 a.m. for work, on a show that attempted to shoot at this same location twice before with no results. Will Monday be a mess? Oh, you can count on it. The crowd appreciates Mitch Woods’ rendition, and so do I. The party continues with “Jambalaya,” a song I always associated with Fats Domino, as Mitch Woods clearly does, but was written by Hank Williams. Mitch Woods delivers an energetic version that pops and moves, and features more great work on saxophone. Yeah, it turns into a fun jam. Mitch adds some lines at the end: “One, two, three, four, five, six, seven, eight, nine/Baby, I’m so glad that you are mine/Two, four, six, eight, ten/Baby, please don’t leave me again.” “Walking To New Orleans” is another song that always makes me smile. I dig its casual yet totally catchy groove, and Mitch Woods does a wonderful job with it.

Mitch Woods delivers a rockin’ rendition of “Rocket 88,” a song written by Jackie Brenston and recorded by Ike Turner & His Kings Of Rhythm. This of course is a fitting choice of covers, as Mitch Woods’ band is called The Rocket 88s. This version features plenty of fun stuff on keys. Mitch Woods keep things jumping with “The House Of Blue Lights,” which wraps up the disc. “Everybody, let’s get up and dance,” Mitch shouts out at one point. Oh yes, that there is some advice I can gladly follow.

CD Track List
A Tip Of The Hat To Fats is scheduled to be released on April 19, 2019 on Blind Pig Records.
Posted by Michael Doherty at 2:10 PM