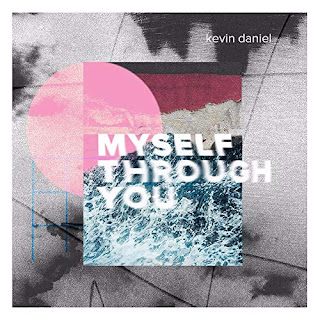 Singer and songwriter Kevin Daniel recently released a seriously good new single, “Pour Me A Drink.” It’s a song that I’ve been digging, in part because of its lyrics. Check out these lines: “Pour me a drink as sweet as the sunset/As sweet as the day you were born/And pour it softly like the winds that blow through me.” This song is from his upcoming debut full-length album. While I’m looking forward to that CD, I wanted to check out his previous release, an EP titled Myself Through You. A few of the folks joining him on this disc are people that play on the new single, such as Judson Nielsen on organ and piano, Irene Blackman on vocals, and Roman Urbanski on vocals. Also joining him on this EP are Ben Rice on guitar, Billy Pearson on bass, Renee Hikari on drums, Daniel Ieadan on steel guitar, Bennett Sullivan on banjo, Eli Chalmer on flugelhorn and trombone, and Adam O’Farrill on trumpet. Kevin Daniel, by the way, not only sings and plays guitar, but also plays saxophone.

The EP opens with its title track, “Myself Through You,” which begins with a gentle folk sound. Then when it kicks in, it takes on a brighter sound, in part because of the presence of banjo, a sound that lifts my spirits. There is a joy to the sound. As with the new single, this song boasts some damn good lyrics. Here is a taste: “Don’t call me blind, don’t call me weak/Call me just another man at your feet/If I had to choose who to be/Well, I guess I’m choosing me/I’m seeing myself through you/‘Bout time I saw your shade of blue/I’m watching myself stumble too/Inside, I won’t let go of you.” Not bad, eh? And there is a section with just vocals and percussion, which brings me back to my childhood, when it seemed every song had such a section. That’s followed by “Golden,” which has a somewhat more serious tone. I love that there is banjo and steel guitar, and yet a considerable amount of soul to this track as well. Somehow it all works really well. “Forget the past and the future and live for today/For too long, for too long/For too long, I have been broken.” It ends beautifully.

“Born A Preacher” is an emotionally stirring number with a bit of blues and a bit of soul, and with a powerful vocal performance. “I was born a hater/With anger that burns within/And I’ll die and I’ll die buried with sins/And when I’m down and out rock bottom in the street/I’m singing out with ill defeat.” This track also features some nice work on guitar. That’s followed by “Faded Red,” which has a more cheerful sound from the start. “My demons are left in the past, but they’re coming undone/If you wanna wake up, wake up/If you wanna break down, break down.” Those lines of course remind me of Cat Stevens’ “If You Want To Sing Out, Sing Out.” Plus, the presence of banjo reminds me of Harold And Maude, the film that introduced the world to that song (that also happens to be my favorite film). This song makes me happy, and features some good stuff on keys. And then toward the end, we are treated to a brief but wonderful section with horns leading the way. The EP then concludes with “Hardcore Medicine,” providing a good dose of country soul. I love the organ and steel guitar. There is a sweetness to this track too that I appreciate. “It’s been too long since I’ve tried/It’s been too hard since you’ve died/Look at all this love/I like to act like I’m not/One who has hit a hard spot/Hey, look at all this love.”

CD Track List
Myself Through You was released on March 16, 2018.
Posted by Michael Doherty at 9:30 PM