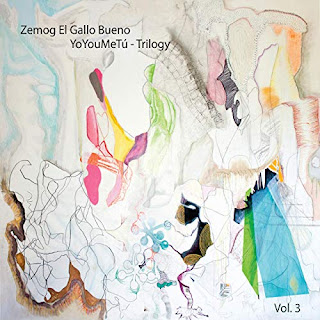 I like a lot of different music, and some of the music I like is really different. Such is the case with a group called Zemog El Gallo Bueno. The group’s latest release, YoYouMeTú Trilogy Vol. 3, is a delicious jazzy exploration of our various realities (our relationships and interactions with each other and with ourselves; our identity, both personal and worldly), with plenty of great grooves, and with lyrics sung in both Spanish and English. Some serious topics are addressed here, but they are explored with a certain amount of joy and warmth and humor, and by talented and undaunted musicians. Most of the album’s tracks were written by vocalist and guitarist Abraham Gomez-Delgado.

This disc opens with “Matteo El Limonero 2,” which feels like a dawn, the band waking up, warming up. There is a gentle beauty to this brief instrumental track, which was composed by Matthew Bauder. That’s followed by “Americae,” an intriguing tune. If you’re into jam band music, you are going to find a lot to enjoy here. And if you’re into artists like Frank Zappa, this will probably hold some appeal too. If you like your music to take you places, even challenge you a bit, you are going to love this album. Though the track features a good groove, the lyrics are delivered in a way that works in contrast to that, the vocalists deliberately dragging the words out, giving them a strange intonation. “We think this but feel that/Wish away our wishes/It’s in front of us/No, it’s not/The cycle is so vicious.”

“The Balance Imbalance Dance” is a delightful, jazzy track that then suddenly steps off into outer space for a moment, like a Mexican restaurant at the edge of the solar system. And it is a dance; hell, someone even cuts in at one point. That’s followed by “Chains,” which was written by Chris Stromquist and Abraham Gomez-Delgado. There is something deliciously twisted about this one, its sound, particularly in the vocals at certain parts. “I am gone, I am gone/Way inside, my only way to hide/I am gone, I am gone.” This track also features nice stuff on horns. I am totally into this.

“YoYouMeTu,” the album’s title track (and I suppose the title track of the entire trilogy of albums), delivers a combination of folk and jazz sounds with a strong percussive base. It establishes and develops the rhythm, the vocals not coming in for nearly two minutes. And if you were listening without having seen the track list, you might think they were singing, “Yo, you, me too.” It goes in an unexpected direction vocally toward the end. That’s followed by “Quiero Correr,” one of my personal favorite tracks. I love the quirky sound of this one from the start, like an alien had joined a jazz band, and is grooving at some delightful club where folks of all sorts mingle and dance. And I fucking love the horn on this one. Fantastic, and a whole lot of fun!

As its title seems to promise, there is something sexy about “Sexy Carnitas: A Telenova,” with a sadness to the vocal delivery. There is some excellent playing on this track. And that horn, the way it rises up, is wonderful. “Agua A Peso” establishes a beat, the percussion driving this track. The vocals have a raw, immediate feel, like this is all taking place on a street somewhere and three or four dozen people are dancing in the street. It has the sound and feel of a live track, though apparently was recorded in the studio. There is applause at the end, so…? The disc then concludes with “Pianola,” which has a kind of pleasant, cheerful folk vibe that I can’t help but enjoy, and a joy and passion to the vocal delivery.