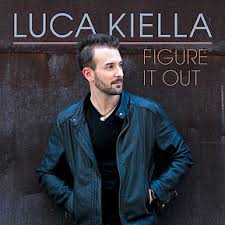 Luca Kiella is a pianist based in Chicago, his music a combination of blues, soul and pop. Figure It Out, a five-track EP, is his debut release, and it contains some original material as well as a couple of covers. He plays piano and organ on these tracks, and provides the vocals. Joining the pianist on this EP are Dave Forte on bass, Rick King on drums, and Aaron Weistrop on guitar.

Figure It Out opens with “Ten O’ Clock Blues,” a delicious, lively, jumping instrumental number, driven by the piano. This is a tune that will put a smile on your face and might get you dancing too. It rocks and swings and moves, a tune to drive away your blues. That’s followed by a cover of Jon Cleary’s “Unnecessarily Mercenary,” a song that was also recorded by Bonnie Raitt. This one too has a good energy. The opening lines are “Well now, you’re just into looking after number one/Only thing you worry about is having your fun.” I’m not sure what to make of my tendency to relate anything negative to the man pretending to lead our country, but looking out for number one certainly applies to that cretin (though obviously he is not what the song is about). I can’t wait until that mendacious, incestuous traitor can be buried and forgotten. Anyway, my favorite part of this track is that lead on keys in the second half. Great stuff.

The EP’s title track, “Figure It Out,” has a delightfully cheerful sound, especially to the vocals. The lyrics have a bit of a nostalgic quality, to be sure, which probably has more appeal these days than ordinarily. I mean, don’t we all want to look back to a better time? Here is a taste of the lyrics: “No reason to worry/A smile on my face/Every day was happy/No trouble to chase.” The song also has a positive groove, and the instrumental section halfway through begins with a somewhat sweeter vibe that I dig, and builds from there toward a strong finish. That’s followed by the EP’s second cover, Don Gibson’s “I Can’t Stop Loving You,” a song made famous by Ray Charles and recorded by a whole lot of artists over the years. Luca Kiella delivers a groovy bluesy rendition. However, his voice sounds so positive that when he sings lines like “Those happy hours that we once knew/Though long ago, they still make me blue,” I don’t necessarily believe him. He needs a little more hurt in his voice. This track provides a chance for Aaron Weistrop to shine on guitar. There is also some fun stuff on organ. “I can’t stop loving you/I’ve made up my mind/To live in a memory of the lonesome times.”

The EP concludes with “So Many Questions.” This one has a different feel right from the start, in its more thoughtful, introspective sound. And that’s even before the vocals come in. Luca Kiella also gives us something different vocally in large sections of it, imbuing the song with a good deal of soul. “I crossed the ocean/Went far from where I’m from/Left my home, my love and my best friend.” It’s a blues song with something of a pop vibe, and it has personal truth and relevance, as Kiella moved from Italy to the United States. The band does not back him on this track; it is just vocals and piano, and is quite effective. “Things don’t change/I just don’t understand/Why this sadness just won’t go away.”