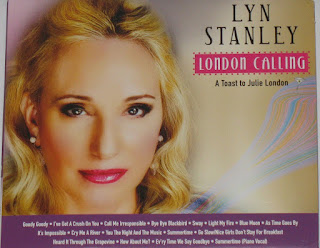 I was turned onto Lyn Stanley’s talent a few years ago when she released Interludes, her voice and style immediately impressing and delighting me. Then in 2017 she put out a couple of albums of standards and beloved tunes, The Moonlight Sessions Volume One and The Moonlight Sessions Volume Two. For her new album, she has chosen to explore the work of another singer, Julie London. London Calling: A Toast To Julie London features material that was recorded by Julie London, songs London recorded the first versions of, plus songs she covered. As I’ve come to expect from Lyn Stanley, this is a wonderful album. This music provides a welcome respite from the current horrors and tensions permeating our country.

The disc opens with a fun, playful, and sweet rendition of “Goody Goody,” just the sort of track to momentarily push away our cares. Julie London included this song on her 1958 LP Julie Is Her Name Volume Two. By then, several other artists had already released versions, including Frankie Lymon. I love how Lyn Stanley approaches this song, and the track features some nice work on bass and piano. It’s followed by “Call Me Irresponsible,” song that London included on The End Of The World. Lyn Stanley’s version interestingly opens with some cool, lively percussion, signaling this rendition is certainly not going to drag. By her delivery of lines like “Call me unpredictable/Tell me I’m impractical,” it is clear she takes some relish in being so, which is great. More wonderful work on piano also stands out on this track. Then we get an excellent take on “Bye Bye Blackbird.” I love the way this one is presented, with Lyn’s voice supported just by Chuck Berghofer’s wonderful work on bass. There is even a bass solo. But it is Lyn’s vocal performance that makes this track something seriously special. She gives some absolutely delightful and surprising readings of certain lines, such as “Singing low” and “So is he.” And just before the end, Berghofer delivers a little nod to “These Boots Are Made For Walkin’” (he played bass on the original Nancy Sinatra track).

Lyn Stanley gives us an unusual take on “I Heard It Through The Grapevine,” a song that has been recorded by many artists over the years, including Gladys Knight & The Pips, Marvin Gaye, and Creedence Clearwater Revival, but not by Julie London (Lyn indicates this by referring to it as a bonus track on the CD’s track list). I’ve never heard a version like this one before, with some prominent percussion and nice touches on piano, and an interesting vocal delivery. That’s followed by “Cry Me A River.”  The first version of “Cry Me A River” that I ever heard was that by Joe Cocker, and so I’ve compared all other renditions to that one, something I shouldn’t do, since there are no versions like that one by Cocker. The first version of this song that was released was that by Julie London. It was included on her debut LP, Julie Is Her Name, released in 1955. This version by Lyn Stanley has a rather sultry vocal delivery, backed by some good work on guitar, an approach similar to that taken by Julie London. Lyn Stanley then delivers one of the most popular songs of all time, “As Time Goes By.” While my favorite film is Harold And Maude, probably the best film ever made is Casablanca, which features this song. Julie London included “As Time Goes By” on her 1965 album Our Fair Lady. This new version by Lyn Stanley features some excellent work on guitar.

I’ve said it many times, you can never go wrong with Gershwin. Lyn Stanley proves that again here, with a phenomenal and completely engaging rendition of “Summertime,” which is cool right from its start. Lyn gives us an absolutely wonderful vocal performance. And check out that fantastic and expressive work on guitar. Plus, this track features some cool work on bass and piano. This is one of my personal favorites from this release. And guess what? We are treated to a second version of this song at the end of the album. That second version finds Lyn’s vocals supported by just Mike Garson on piano. Though quite different, this too is engaging, almost haunting.

I think it was Sha Na Na that turned me onto “Blue Moon.” And before you think to chastise me for that, keep in mind I was like five or six years old. Julie London included the song on her Julie Is Her Name Volume Two album. As you would expect, Lyn Stanley’s rendition is much closer to that by Julie London than to the version by Sha Na Na. This is a wonderful, beautiful rendition, featuring more good work on guitar. Lyn also presents an unusual rendition of “Light My Fire” on this album. Yes, Julie London covered The Doors’ “Light My Fire.” She included it on her Yummy, Yummy, Yummy album. Lyn Stanley gives the song an interesting spin, with that Latin flavor and rhythm. That’s followed by a gorgeous rendition of “Sway,” a song that Julie London included on Latin In A Satin Mood. Lyn gives us a slow, sexy and moving rendition. When she sings “Hold me close,” you’ll feel that this track is almost holding you. There is something so intimate about this recording, you’ll feel Lyn could suddenly brush your cheek if she so chose. What a vocal performance! Lyn then becomes more playful with “Go Slow,” which she combines with “Nice Girls Don’t Stay For Breakfast” (songs that appeared on two different Julie London albums, released a decade apart). This is a humorous and perfect combination of songs. “Nice girls don’t stay for breakfast/And I’m a nice girl/You know that I am.” Oh, the way she dips into her lower registers for “You know that I am” tells us just exactly what she really means there. I love that bass line. Plus, there is some nice stuff on keys. This one is over too soon.

CD Track List
London Calling: A Toast To Julie London was released on February 15, 2019.
Posted by Michael Doherty at 6:19 PM