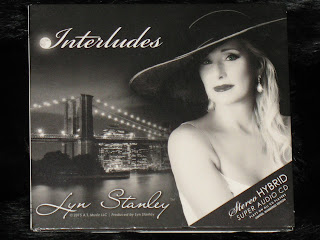 It’s amazing to me that Lyn Stanley’s singing career began only four and a half years ago. Listening to her new CD, Interludes, her third full-length album, you’d think she’d been singing professionally her whole life. On this CD, she does some jazz standards, but also delivers some surprising choices of material, all of the songs in some way related to love and relationships. And she has a great band backing her, displaying undeniable talent while remaining in support of her vocals. I absolutely love her style. She has a voice for night, and some of these tracks (like “The Island”) feel like that magic time when the night is basically over but there is still the possibility of squeezing some more intimate moments from it. That in-between time when everything is possible and the consequences seem distant and unimportant. It’s great to be able to visit that place through music.

Lyn Stanley opens this album with “How Long Has This Been Going On?” I’ve said it before, but I’ll say it again here: You can’t go wrong with Gershwin. Lyn delivers the first few lines a cappella, so right away you get an idea of what she can do vocally. It’s a fairly smooth, relaxed rendition, and it features Bob McChesney on trombone. Lyn Stanley follows that with “Just One Of Those Things.” Going from Gershwin to Cole Porter, she shows us what she can do with material from the greatest songwriters. “Just One Of Those Things” actually begins with percussion, and when Lyn’s vocals come in, they are accompanied at first by wonderful work on bass, then by guitar, then by piano in quick succession, an interesting approach. That is Chuck Berghofer on bass, by the way. This jazz rendition has a great pace, and again features excellent work from Bob McChesney on trombone.

Lyn then tackles a more modern song with Alannah Myles’ “Black Velvet,” which was written by Christopher Ward and David Tyson. Lyn Stanley isn’t the first jazz vocalist to cover this one. In fact, not too long ago Hannah Burgé included a version of it on her debut album, Green River Sessions. Lyn Stanley does a really good job with it, having it open with finger snaps and bass, and giving it a kind of sexy vibe. This track features some seriously nice work on piano by the amazing Mike Garson. And those finger snaps are by Steve Rawlins. It’s really good, but even better is her rendition of “Boulevard Of Broken Dreams,” a tune written by Al Dubin and Harry Warren, and featured in the 1934 film Moulin Rouge. This is one of my favorite tracks, and it interestingly features both cello (an instrument I love) and harmonica. Lyn’s vocals are seductive and romantic. I love songs like this that transport you. For the length of the song, you can live in that world, or imagine that your life is actually much more interesting than it is. That’s Cecilia Tsan on cello.

Surprisingly, she follows that with a Led Zeppelin cover. Yes, seriously. She takes “Whole Lotta Love” and gives it a smoky, jazzy feel. There is even an instrumental section, where each musician takes brief lead parts in a round. I dig the piano, particularly during the extended ending. That’s Mike Garson again on piano. I should mention that while this is a Led Zeppelin song, Led Zeppelin completely ripped off Muddy Waters’ recording of Willie Dixon’s “You Need Love.” I like Led Zeppelin, don’t get me wrong, but they totally stole this song (among others).

I love Billie Holiday’s “Don’t Explain,” a song she co-wrote with Arthur Herzog Jr. “Hush now, don’t explain/You’re my joy and pain.” Lyn Stanley does a really good job with it. It’s dangerous covering Billie Holiday, because how can anyone beat that voice? It might seem like covering her is setting one’s self up for failure, but Lyn Stanley makes the song her own. This version has its own feel from the start, opening as it does with some nice work on harmonica by Hendrik Meurkens. (By the way, Hendrik Meurkens also plays harmonica on that Hannah Burgé CD.)

Lyn gets kind of playful with her vocal delivery of “It’s Crazy,” making that track a delight. And then she gets quite playful and loose on the fun “I Was A Little Too Lonely,” written by Ray Evans and Jay Livingston. “You promised me you’d come back/I promised to wait/But I was a little too lonely/And you were a little too late.” This tune also features a cool bass solo by Chuck Berghofer.

The musicians on this release include Bill Cunliffe on piano, Mike Garson on piano, Chuck Berghofer on bass, Ray Brinker on drums, Paul Kreibich on drums, John Chiodini on guitar, Bob McChesney on trombone, Hendrik Meurkens on harmonica, Brad Dutz on percussion and Cecilia Tsan on cello.

Interludes was released on November 20, 2015 as a double album on vinyl and on SACD.
Posted by Michael Doherty at 11:59 PM