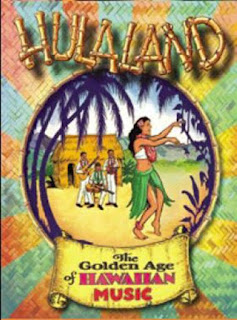 Hulaland: The Golden Age Of Hawaiian Music is an incredible four-disc set of music from the 1920s to the present, containing more than a hundred tracks. But this set is not just great music. It is also a hardcover book celebrating Hawaiian pop culture, with information on the musicians and instruments (including a brief history of the ukulele), as well as tons of photos of album covers, sheet music covers and other delights. A lot of great stuff is packed into the book’s hundred pages. It’s clear a lot of love went into this package. You can completely immerse yourself in the Hawaiian pop culture with this box set. Enjoy!

Disc One: From Hollywood To Honolulu: Hawaii Goes Eclectic 1931-1957

The first disc contains music from the 1930s to the late 1950s, before Hawaii became the fiftieth state. This disc covers the early popularity of the music, and its influence on Hollywood. It opens with Louis Armstrong with Andy Iona And His Islanders performing the sweet and pretty “On A Little Bamboo Bridge.” It has that exotic yet familiar magical sound, music to transport you from your daily routine to that wonderful other relaxing and romantic realm. This recording is from 1936, and it’s followed by Tau Moe’s “Hula Blues,” a tasty instrumental track from 1953 with some excellent work on guitar. What I love about “Yaaka Hula Hickey Dula,” the following track, is the female backing vocals, with that great 1940s sound. I’d be shocked if they didn’t make you smile.

One of the wildest and most fun tracks on the first disc is Jo Stafford’s fast rendition of “Hawaiian War Chant,” with a great section of drums and horns. You probably know Jo Stafford most from her 1952 cover of “You Belong To Me.” This recording of “Hawaiian War Chant” is from the previous year. (By the way, for another fun rendition of this tune, check out the Sylvester Stallone episode of The Muppet Show.) This disc also includes Ethel Merman’s version of “Ukulele Lady.” “If you like a ukulele lady, ukulele lady like-a you/If you like to linger where it’s shady, ukulele lady linger too.” Wonderful! Also wonderful is Roy Smeck’s instrumental, “Crazy Uke.” Things go more in the country direction with Slim Whitman’s “Hawaiian Cowboy.” And yes, he yodels on this track. How could he avoid it?

This disc also includes some movie and cartoon excerpts. The first is from Hawaii Calls, a 1938 film starring Bobby Breen, Ned Sparks and Gloria Holden. It’s a cute moment about Hawaii and ukuleles (“There are too many ukulele players in the world now”). The second is an excerpt from Burns and Allen, which is followed by Gracie Allen performing “Honolulu” from the film of the same name. “Betty The Hula Dancer” is an excerpt from a Betty Boop cartoon.

The first disc ends the way it began, with a great track from Louis Armstrong. This time it’s “On A Coconut Island,” which was also recorded in 1936.

The second disc sort of picks up where the first left off, featuring music from the late 1950s through the mid-1970s, showing the popularity of island music in mainstream culture. In fact, it opens with the theme to the television series Hawaiian Eye, which starred Connie Stevens and Robert Conrad, and also includes the theme from Hawaii Five-O. The Hawaiian Eye theme is followed by Bobby Christian’s cool cover of Duke Ellington’s “Caravan.” And then, sticking in the jazz realm, we get Arthur Lyman’s 1960 recording of “Jungle Drums.” Interestingly, that’s followed by The Passions’ “Jungle Drums,” this time with vocals. The second disc also includes “Taboo,” a very cool instrumental track from The Ventures.

One of my favorite tracks on this disc is another instrumental, “Puka Paka” by Wout Steenhuis. It’s just a delightful tune. It’s followed by another great instrumental, “Garden Of Eden Pt. 1,” which is dominated by drums, which I appreciate. Another favorite is the strange and beautiful “Chant Of The Moon” by Robert Drasnin, a recording from 1959. Robert Drasnin also scored several films, including The Candy Snatchers, a movie I really like. Also included on this disc is Robert Drasnin’s “Tambuku,” also from 1959. Another favorite is Earl Grant’s “House Of Bamboo.”

This disc also includes several commercials, really showing the influence on popular culture. These include commercials for Coca-Cola (“Coca-Cola is the most popular drink in the islands because of how it tastes when you come in from the waves”), Newport menthol cigarettes, C&H Pure Cane Sugar (with children singing about sugar), and Hawaiian Delight.

The third disc then goes back to early material, presenting some great old recordings. It opens with “Honolulu Stomp,” a fun, loose instrumental tune from 1927 that has a something of a back-porch vibe to it. It’s followed by a cool, relaxed song titled “Hula Blues,” which has a line that is unintentionally amusing: “Fair land of flowers and golden showers.” Or maybe it was intentional? I don’t know – I still haven’t been to Hawaii. But now I’m more eager to go. “You wiggle, you giggle, you wiggle to the hula blues.” Okay!

One of my favorite tracks on the third disc is “Oua Oua” by Kanui and Lula. It is ridiculously enjoyable and fun. “Down In Waikiki” by Eddy’s Hawaiian Serenaders is also a total delight. I am also incredibly fond of “Mai Giyee (Don’t Give It All Away)” by Hoot Gibson And His Hawaiian Foursome, a recording from 1929. There is also a cool instrumental recording of “Sweet Georgia Brown” by Jim And Bob from 1933, with ukulele and guitar.

The third disc contains another version of “Hawaiian War Chant,” this one from Andy Iona And His Islanders. This 1934 recording is quite a bit different from the Jo Stafford version on the first disc, but is just as enjoyable. There are a few other tracks by Andy Iona And His Islanders, including “Naughty Hula Eyes” (a good, sweet tune, and perhaps my favorite title in this collection), “Minnehaha (Hawaiian Stomp)” and “Hawaii Sing To Me.”

The fourth disc features recordings by Robert Armstrong, who also contributed the cover art for this box set. This disc opens with “Palakiko Blues” by Ken and Bob (that is, Ken Emerson and Robert Armstrong). This is a really wonderful instrumental track that was included on their Escape To Jazz Island album. Also from that album are the delightful “Shanghai Lil” and the catchy instrumental “Tiger Shark.” “The Cat’s Whiskers” by Robert Armstrong and Sourdough Slim is a lot of fun, and is mostly instrumental apart from some hooting and hollering (I could do without the stupid “meow” at the end however).

One of my favorites is “Yiddish Hula Boy (Becky, I Ain’t Coming Back)” by Janet Klein And The Parlor Boys (Robert Armstrong is a member of that group). As you might guess from its title, this song is a bit silly and a treat. “Give me a girl with a dress of shredded wheat/With a rope around her neck and doughnuts on her feet.” The Parlor Boys also do a really good version of “Honolulu Stomp.” The fourth disc concludes with Ken and Bob's rendition of “Hawaiian War Chant,” a perfect ending to this collection.

Hulaland: The Golden Age Of Hawaiian Music was released on October 30, 2015 through Rockbeat Records.

There are so many tracks, so rather than type them all, here is a photo of the back of the package: 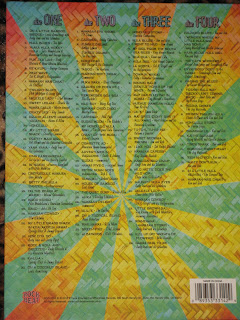 Posted by Michael Doherty at 11:01 PM