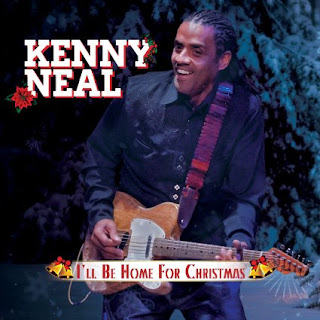 Every year, a whole lot of Christmas albums are released, and so much of that music is awful. However, there are some good CDs that celebrate the holiday, and one of the best ones this year is Kenny Neal’s I’ll Be Home For Christmas. Kenny Neal takes his well-known Louisiana blues sound and applies it to some traditional Christmas fare such as “Winter Wonderland” and “Silent Night,” as well as some more modern holiday favorites such as “Merry Christmas Baby.”

The album opens with one of the modern tunes, Amos Milburn’s “Christmas Comes But Once A Year,” which Milburn wrote with Albert Shubert. Kenny Neal makes it a sort of upbeat blues number, with some prominent and excellent work on harmonica. There is a bit of humor to this tune, mentioning at least one of the drawbacks of the holiday: “It’ll take the next six months to pay them bills/Every time I think about it, it gives me chills/But I don’t care/Christmas time comes once a year.” But this tune is positive, making Christmas sound like a good time: “I’m getting ready to have myself some fun/I’m gonna really, really party ‘til New Year’s Day/And I don’t care what I have to pay/Let the good times roll/Christmas time comes once a year.” It’s a very good opening track, and he follows it with “Silver Bells.” I absolutely love what he does with this song, giving it a cool groove. This is certainly one of the best versions of this popular holiday song that I’ve ever heard, and I really dig the bass line by Darnell Neal. Kenny Neal also offers some really nice work on guitar, particularly during the instrumental section halfway through.

And then he makes “Winter Wonderland” swing. Here Syreeta Neal takes lead vocal duties. There is an interesting lyric change: “And pretend that he is Clarence Brown” instead of “And pretend that he is Parson Brown” (a nice nod to a fellow Louisiana blues musician). Kenny Neal Jr. is on bass and drums on this track. Syreeta also provides vocals on “Have Yourself A Merry Little Christmas,” here simply titled “Merry Little Christmas.” Interestingly, Kenny Neal doesn’t play on this track. Syreeta is accompanied only by Joel Joseph on keyboard. This one doesn’t quite work for me, as the vocals seem a bit much; I prefer a mellower, sweeter approach vocally. Syreeta Neal and Joel Joseph also perform this CD’s rendition of “O Come All Ye Faithful,” which for me is the weakest track.

Kenny Neal provides two versions of “Merry Christmas Baby,” one of my favorite holiday songs, which was written by Lou Baxter and Johnny Moore and recorded by Charles Brown (in the liner notes, the song is attributed to Brown). This song has been recorded by many artists over the years. I’ve always been partial to Chuck Berry’s version myself. Kenny Neal’s first version (which is actually titled “Merry Christmas Baby #2”) is a more rockin’ version than many I’ve heard, and his voice has a nice, rough quality. It’s kind of similar to Otis Redding’s approach. The second version on this disc, titled “Merry Christmas Baby #1,” is a slower rendition, and it’s the one I prefer. I just really like the groove, and there is some delicious guitar-playing in an extended instrumental section (this version is six minutes long). Plus, this slower version includes the line about being “lit up like a Christmas tree” at the end.

One of my favorite tracks on this disc is “Lonesome Christmas,” a tune written by Lloyd Glenn and originally recorded by Lowell Fulson. This one features some great work on harmonica right at the start, and a good groove. “I won’t be home this Christmas/To help you decorate the Christmas tree/I’ll be thinking of you, baby/And hope you’ll be thinking of me.” The album concludes with “Silent Night,” with Syreeta Neal on vocals. This is a fun bluesy rock take on the tune, and at one point Syreeta urges Kenny, “Play the guitar, Daddy.”

CD Track List
I’ll Be Home For Christmas was released on November 6, 2015 on Cleopatra Records.
Posted by Michael Doherty at 9:47 PM