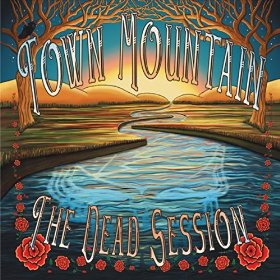 Twenty years after the death of Jerry Garcia and the end of the Grateful Dead, the music is still vibrant, moving and very much alive. And I just couldn’t be happier about it. It’s interesting to me how many groups are now finding within that music something they wish to say or express. I always thought there was a lot of heart in the Grateful Dead’s music, and that was one of the keys to its longevity. Well, you can certainly hear that in the excellent new CD from Town Mountain, The Dead Session.

The CD contains two songs, the first being “Mississippi Half-Step Uptown Toodeloo,” the opening track from the Grateful Dead’s 1973 studio release, Wake Of The Flood. It was written by Robert Hunter and Jerry Garcia, and was one of those tunes that Jerry could really sink his teeth into vocally during live performances. Here “Mississippi Half-Step Uptown Toodeloo” becomes a sweet country tune, with some wonderful work on fiddle by Bobby Britt. I love Robert Greer’s vocals, which have kind of a natural, honest feel, which works so well with this tune. The line that always stuck out for me from this song is “I nailed a retread to my feet and prayed for better weather.” The band is clearly very comfortable with this material, the music feeling like it’s flowing from within them rather than something they’re attempting to imitate. You know? Basically, what I’m saying is it’s a damn good rendition, with a nice jam at the end.

The second song on this disc is not a Grateful Dead original, but rather a Johnny Cash tune that the Dead often covered. “Big River” is a song that Bob Weir sang lead on, and one that I recently saw him do with Dead & Company in Worcester, Massachusetts. Town Mountain kicks it off with the fiddle, and right away I’m on board. There is a sense of fun about this rendition. I love the way Robert Greer plays with the line “I met her accidentally in St. Paul, Minnesota,” a line that always makes me smile. Jesse Langlais’ work on banjo also makes me smile. Jack Deveraux joins the band on pedal steel on this track, a very nice addition.

CD Track List
Town Mountain is based in Asheville, North Caroline, and features Jesse Langlais on banjo and vocals, Robert Greer on guitar and vocals, Phil Barker on mandolin and vocals, Bobby Britt on fiddle, and Adam Chaffins on bass. Joining them for this release are Evan Martin on drums, Jon Stickley on bass and guitar, and Jack Deveraux on pedal steel.

The Dead Session was released on November 13, 2015. By the way, the cover art for this CD was done by Taylor Swope, who also designed one of the official posters for the recent Fare Thee Well series of shows, as well as the official poster for the Furthur 2009-2010 New Year’s show.
Posted by Michael Doherty at 5:35 PM