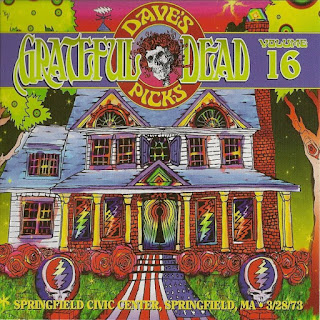 The final Dave’s Picks volume of 2015 arrived recently, and it’s a good one. Anything from 1973 holds the promise of something special, and this show from March 28, 1973 at the Springfield Civic Center in Springfield, Massachusetts certainly doesn’t disappoint. I am one of the many people who consider 1973 to be the best year for the band. The jams had a great jazzy vibe then, and some of my favorite Grateful Dead tunes were introduced, such as “Eyes Of The World.” Also, there seemed to be a ton of joy and passion in the music, even more than usual. This show took place not far from where I grew up (though I had just turned one year old, and so was completely unaware of the band at the time).

The first disc contains most of the first set (man, they played long first sets back then – the first disc is approximately seventy-five minutes). The first set kicks off with a seriously fun and smooth version of “Cumberland Blues.” They follow it with “Here Comes Sunshine,” which was a new song at the time, having been introduced just the previous month. The first set also contains “Wave That Flag,” the song that would eventually become “U.S. Blues.” This early version has a lot of lyrics that would later be dropped, and it’s great to hear them. “Hide in caves, walk on waves/Pull the tooth, stretch the truth.” Plus, it’s a great tune to dance to.

The band keeps things moving with “Beat It On Down The Line,” before slowing down with “Loser” and a nice “Jack Straw” and a wonderful “Box Of Rain.” One of the highlights of this first disc is “They Love Each Other,” another tune that was new at the time. This version has a lot of energy, played at a faster clip than it would be in later years. Also, at this time it has that other short bridge section that would later be dropped, and I really like that section. This rendition does seem to end abruptly and perhaps prematurely, but no matter. It’s followed by a sweet “El Paso” and a beautiful “Row Jimmy.” These lines always grab me: “Broken heart don’t feel so bad/You ain’t got half of what you thought you had.”

The second disc contains the last several songs of the first set and a good chunk of the second set. It opens with something of a rarity, Loretta Lynn’s “You Ain’t Woman Enough.” This was a song the Grateful Dead only played in 1973, and it features Donna Jean Godchaux on lead vocals, doing a country twang. There is a bit of stage banter before the next song, with Bob Weir telling the crowd, “If you gotta smoke, you gotta go out back and do it.” And then they do the Take-A-Step-Back bit, because, as Bob mentions, the people up front were becoming two-dimensional. They then go into a mellow and pretty “Looks Like Rain.” The first set concludes with “China Cat Sunflower” into “I Know You Rider.”

The second set then gets off to a rocking start with Chuck Berry’s “Promised Land,” followed by “Loose Lucy,” which was another tune that was new at the time, having been played fewer than ten times. This song went through some minor changes, and here it is slower than it would be played later, and it has that backing vocal bit, “Round and round, woo, round and round,” which was later dropped. After “Me And My Uncle,” there is some stage banter about a demonstration for the legalization of marijuana that was to be held in Hartford. This disc also includes “The Race Is On,” a song the Dead played a lot in 1973, but not much in other years. There is also a really good version of “Stella Blue,” one of my favorite songs, and one that was still relatively new at the time (less than a year old). “It seems like all this life/Was just a dream.” This disc concludes with an excellent “Mississippi Half-Step Uptown Toodeloo” (which was also less than a year old at the time of this show).

The third disc then contains the rest of the second set, as well as the encore. And it’s here that we have the biggest jams of the concert. It sounds like right from the start Phil is ready for “Dark Star,” but the band first plays “Weather Report Suite Prelude,” which the Grateful Dead did only a few times. It’s a pretty instrumental piece, and it leads right into a great, thirty-one-minute “Dark Star.” This begins as a mellow, relaxed jam, but of course gets more intense at moments, as the band gets into it, rising and deciding when to fall as well. The jam goes into some surprising areas, like around the twelve-minute mark, when what seems like a drum solo suddenly turns into some interesting stuff on guitar and piano. And then eighteen minutes in, the band returns to that familiar theme and we get the first verse. And after that, the band goes into weirder territory. And without ever getting to the second verse, the band segues into “Eyes Of The World,” another of my favorite songs, and another that was new at the time. Here they get into the first verse almost immediately. This is an excellent early version, though there isn’t all that much jamming until after the final verse. But that jam at the end is absolutely fantastic, and includes that great section that the band only did early on. I absolutely love it. This jam is probably the highlight of the show for me. Although what follows is also wonderful, as the band then ends the second set with an energetic “Playing In The Band,” which of course contains plenty of great jamming. The band keeps up the energy for the encore, “Johnny B. Goode.”

Disc One
Disc Two
Disc Three
Dave’s Picks Volume 16 was released in early November, 2016 (actually, it looks like my copy shipped on Halloween).
Posted by Michael Doherty at 6:08 PM