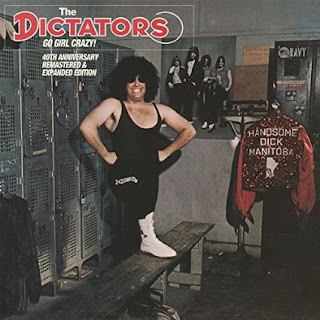 The Dictators’ debut album, Go Girl Crazy!, released in 1975, was one of the first punk records, and is now being re-issued in a special remastered and expanded edition. These tunes are screaming with attitude, sarcasm, and energy, and delivered with a delicious humor. Most of the tracks are originals, but the band also does a couple of interesting covers. This expanded edition contains a whole lot of bonus material, including several previously unreleased tracks, plus liner notes by band member Andy Shernoff.

The album opens with “The Next Big Thing,” which begins with applause, and then with a little pretend berating of a crowd: “I don’t have to be here, you know. I didn’t have to show up here… This is just a hobby for me. Nothing, you hear? A hobby.” This song sort of pokes fun at the boasting of rock and rollers, heard in the vocal approach to the title line, “I’m the next big thing,” while also possibly claiming that same thing for themselves. Who knows? After all, for sure this song has a rock hook, and it does get a bit personal with the (surprising) lines, “I knocked 'em dead in Dallas/And I didn't pay my dues/Yeah, I knocked 'em dead in Dallas/They didn't know we were Jews.” There is certainly some humor in the lines, “But I won't be happy/’Til I'm known far and wide/With my face on the cover/Of the TV Guide,” trading Rolling Stone for TV Guide. (Dr. Hook’s “Cover Of Rolling Stone” came out a few years earlier.)

The Dictators follow that with a funny, cool rendition of the Sonny And Cher hit “I Got You Babe,” a great, loud, messy version. Sure, it’s a large part sarcasm, but still, they’re taking the time to play the song, so there must be some earnestness there. And I love the way they sing the “I got you to hold my hand/And I got you to understand/I got you to walk with me/And I got you to talk with me” part, which includes some kissing sounds after the line “I got you to kiss good night.” They also do a seriously fun cover of the Rivieras’ “California Sun.” “And I’d what?” “Cha cha cha.” The bonus tracks include alternate takes of both “I Got You Babe” and “California Sun.”

In “Back To Africa,” they sing about love for a dark-skinned woman, “Darker than a chocolate cake now/She wants to be a singer in America/I told her I could give her a break.” But even more interesting are these lines: “I think that I love you/You're too free to care/Religion will save you/Civilization's here.” In this one, they also sing, “Sometimes I wish I were black.” And then the band follows that perfectly with “Master Race Rock,” a song that is somehow ridiculous and simultaneously ridiculously fantastic, and is not at all about skin color, but rather about teenagers. Check out lines like “Country Rock is on the wane/I don't want music, I want pain!” and “We're the members of the master race/Got no style and we got no grace/Sleep all night, sleep all day/Nothing good on TV anyway/Gasoline shortage won't stop me now, oh no!” Oh yes, teenagers in the seventies! And then “Teengenerate” begins with some mellow organ at like a dull dinner party or something, before kicking in using that famous drumbeat from 1960s songs like “Be My Baby.” An alternate take of “Teengenerate” is included in the bonus tracks, with some playing around at the beginning. “Weekend” is also about those tough teenage years (“I might know better when I’m older”).

“Two Tub Man” has a silly introduction. But once it gets going, like a minute in, it’s pretty cool, with a lot of energy and some absurd lyrics (“I drink Coca cola for breakfast/I've got Jackie Onassis in my pants/I'm never gonna watch channel 13”) as well as some playful boasting (“What I want to do I do/Who I want to screw I screw”). The bonus tracks include a remixed version of this tune (humorously labeled “Remixed, Over-Produced And Totally Reimagined”), remixed from the original multi-track source tapes this summer. Gone is that introduction. (There is a similarly remixed version of “Weekend” on this disc.)

In addition to the other bonus tracks I’ve already mentioned, there is an outtake of “Backseat Boogie,” which is a fun, fast-paced rock and roll tune. “Don’t you think I’m cool?/Backseat boogie/I don’t follow no rules/Backseat boogie/I don’t go to school.” There is also an alternate take of “The Next Big Thing,” and an instrumental version of “Master Race Rock.”