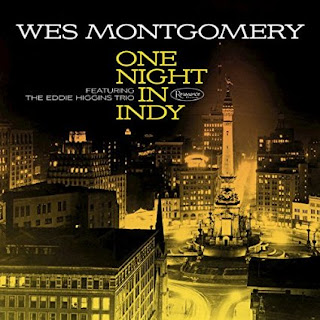 Oo-wee, a new recording from Wes Montgomery! Well, “new” in as much as the material on One Night In Indy has not been previously released. This is a live recording from January 18, 1959, recorded in Indianapolis, and it features Eddie Higgins on piano. This is the only known recording of Montgomery and Higgins playing together, and in fact is the only known performance of the two together, and for that reason it obviously has historical importance. But you don’t have to care about such things to thoroughly enjoy this new CD. The music is so damn good. Walter Perkins is on drums, and as of now it’s not known who is playing bass on these tracks (perhaps that mystery will be cleared up later). The disc includes liner notes by Zev Feldman, who also produced this release.

One Night In Indy opens with “Give Me The Simple Life,” written by Harry Ruby and Rube Bloom. I love Wes Montgomery’s easy-going guitar playing at the beginning of this tune. It just puts me in a great mood. There is joy in the playing of all four musicians. The lead parts don’t get too crazy or anything, but it’s clear these musicians are having a good time. There is a bass solo approximately halfway through. And the second half finds Montgomery and Higgins trading fantastic little bursts, and this is probably my favorite part of this nine-minute track.

It’s followed by Duke Ellington’s “Prelude To A Kiss,” which begins with some gorgeous deep tones on guitar and bass, the two working so well together. The song is inherently pretty, though this rendition isn’t quite as romantic as some that I’ve heard. I love what Eddie Higgins does throughout this song, sometimes adding delightful touches while the focus is on other players. Things then get swinging with “Stompin’ At The Savoy,” written by Edgar Sampson, and famously recorded by both Benny Goodman and Chick Webb (who are also given writing credits). This is a really cool rendition, with things getting loose. There is a brief drum solo by Walter Perkins. And as with the first track, Montgomery and Higgins trade licks toward the end of the track. Wonderful!

Wes Montgomery does a sweet, tender version of Thelonious Monk’s “Ruby, My Dear.” Actually, it’s Eddie Higgins who really sets the tone here, and then Wes Montgomery follows. I really like this rendition, and it ends with some nice playing by Montgomery. By the way, Terry Adams includes a version of “Ruby, My Dear” on his new album, Talk Thelonious. This CD then concludes with a totally delightful version of “You’d Be So Nice To Come Home To,” a popular song written by Cole Porter.

CD Track List
One Night In Indy is scheduled to be released on CD on January 15, 2016 on Resonance Records. It will also be released on vinyl on November 27, 2015 in a limited-edition pressing.
Posted by Michael Doherty at 5:31 PM