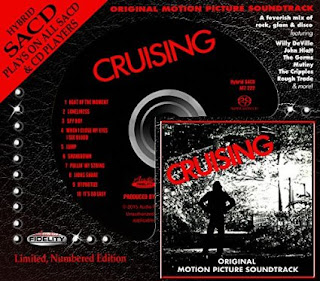 The soundtrack to the 1980 film Cruising is finally getting a proper CD release, thanks to Audio Fidelity. And it’s a limited edition, numbered hybrid SACD. There was a lot of controversy surrounding this film during its production and upon its initial release, with protests centering on the film’s depictions of the gay community. But there is of course no controversy regarding the soundtrack, which features music by Willy DeVille (of Mink DeVille), The Cripples, John Hiatt, and even a track by the Germs. This is a very cool soundtrack, with a mix of punk, rock and funk sounds. Lots of great, raw energy here. The liner notes include some photos from the film. This SACD was mastered by Kevin Gray at Coherent Audio.

The Cripples are a punk band that I’m not all that familiar with. They have two songs on this soundtrack, and they’re both really good. “Loneliness” has a rock feel, but the lyrics are delivered in great punk fashion, with energy and a snarl. “This loneliness is eating me up/Eating me, eating me up/I said, eating me, eating me, eating me up.” And then, perhaps related to the film’s title, they sing, “Hey, baby, I’m cruising in my automobile…I wish I could be a rock and roll star.” “Hypnotize” is a good punk song delivered at a nice pace. “You’re hypnotized/And you forgot why you do these things.”

John Hiatt is a seriously talented singer/songwriter, perhaps most known for his wonderful song “Have A Little Faith In Me,” which also was featured in several movies. His music has delved into several styles over the years. Here, he delivers a strange, slow, excellent rock number titled “Spy Boy.” Check out these lyrics: “Oh, this music is hell/Man, why don’t you turn it up real loud/I’m a stranger here in town/I hope this is the wrong kind of crowd.”

The Germs, during the band’s initial run with Darby Crash on lead vocals, recorded only one full-length album, (GI), which was re-issued a few years ago. They also appeared in The Decline Of Western Civilization, which was released in a box set earlier this year. Apparently, they recorded several songs for Cruising, but only one, “Lions Share,” ended up being used. It’s a good, high-energy tune. Darby Crash committed suicide the same year that Cruising was released.

This soundtrack also includes a really cool rock number from Madelynn Von Ritz, “When I Close My Eyes I See Blood.” This is a fantastic, raw number with lines like “I don’t take no shit where I come from/Please don’t apologize/The damage is done, you’d better dry your eyes” and “I’m going to go to your boyfriend and smash his face.” There is a delicious (though perhaps a bit repetitive) funky number from Mutiny titled “Lump,” and a great driving tune from Rough Trade, “Shakedown.”

CD Track List
This special SACD issue of Cruising Original Motion Picture Soundtrack is scheduled to be released on November 27, 2015 through Audio Fidelity and Sony Music Entertainment.
Posted by Michael Doherty at 12:48 PM