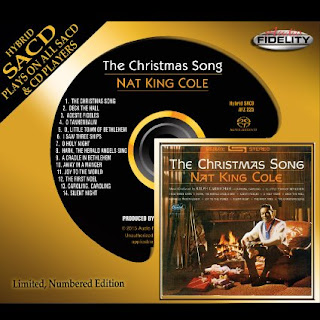 It’s that time of year when Christmas music is all but unavoidable. And while there is a lot of bad holiday music out there, one album you can still turn to and count on is Nat King Cole’s The Christmas Song, which has now been re-issued as a limited edition hybrid SACD. The record was originally released as The Magic Of Christmas in 1960, and then was re-issued as The Christmas Song with the addition of its new title track in place of “God Rest Ye Merry Gentlemen.” And now on this hybrid SACD, it sounds better than ever. It was mastered by Kevin Gray at Coherent Audio. By the way, this disc also plays on regular CD players, so no worries.

The album opens with its title track, “The Christmas Song (Merry Christmas To You),” which was written by Mel Tormé and Robert Wells. This is that gorgeous classic recording that you’ve likely heard every year of your life, and a song that should be in everyone’s music collection. This recording has the warmth we often associate with the holiday, but perhaps don’t often feel. It’s one of the few recordings that really make us want to spread holiday cheer. “Although it’s been said many times, many ways/Merry Christmas to you.” And I really like the delicate piano during the instrumental section. Light a fire, grab a bottle of wine, and curl up in a chair with your loved one while this song plays, and all will be right with the world.

It’s followed by the much lighter “Deck The Hall,” which feels a bit goofy to me. It's my least favorite track. But no matter, as this track is only a minute long. Nat King Cole then turns to more serious fare with “Adeste Fideles (O Come All Ye Faithful).” I am not the least bit religious, but there is a beauty and power to this recording that can’t be denied. I also like his pretty and bright rendition of “O Tannenbaum,” with orchestral arrangement, and his version of “O, Little Town Of Bethlehem,” particularly the strings.

“I Saw Three Ships” has a lighter, more playful feel, but is a much better song than “Deck The Hall.” This version is really about the vocals. Nat King Cole is backed by a full chorus, but not an orchestra, giving it almost the feel of the best caroling group to ever walk the streets in the snow. And I love Nat King Cole’s vocal performance in “O Holy Night.”

While most of the songs on this album are traditional and popular Christmas tunes, “A Cradle In Bethlehem” is one that might not be as familiar to you. It’s certainly not that familiar to me. It is a sweet, mellow song, written by Alfred Bryan and Larry Stock. Here is a bit of the lyrics: “Sing sweet and low a lullaby/’Til angels say, ‘Amen’/A mother tonight is rocking/A cradle in Bethlehem.” The other song on this release that might not be quite as well known is “Caroling, Caroling,” which was written by Alfred S. Burt and Wilha Hutson. It has a happy vibe. After all, how can a song with “Ding dong” in its lyrics be anything but? “Ding dong, ding dong, Christmas bells are ringing.” The album then concludes with a really nice rendition of “Silent Night,” with full chorus.

CD Track List
This special SACD issue of The Christmas Song was released on November 13, 2015 through Audio Fidelity and Capitol Records.
Posted by Michael Doherty at 10:36 AM