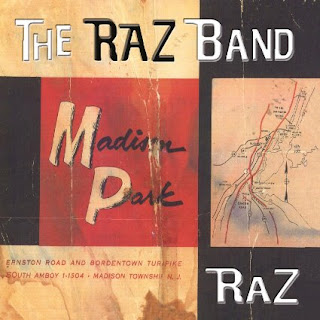 The RAZ Band has apparently been around for quite a while, playing under different names at different times. While you might not yet have heard of them, their new album, Madison Park, might be just the CD to get the band some wider recognition. The band is made up of Michael Raz Rescigno on vocals and guitar, Jeff Hutchinson on drums and vocals, Jim Manzo on bass and vocals, Joey Molland on guitar and vocals, and Joe Vitale on keyboards and vocals. These are musicians you’ve likely heard play with other artists. Joey Molland was a member of Badfinger, and Joe Vitale has played with Joe Walsh and The Eagles. The songs here are originals, though some of them have been around for a while. For example, while “Love Me Do” was written by band member Joey Molland, it was originally released by Badfinger in 1970. A lot of these songs have a 1960s vibe, but the band ventures into several musical areas on this release.

The album opens with “$1.50 For Your Love,” and the first couple of seconds of it led me to believe it would be standard rock, but once the horn kicked in, the song grabbed me. It has the charm of certain 1960s rock songs, while also have the sound of a really good rock and roll bar band. “I’ve got a dollar fifty for your love/Is that enough?” A buck fifty seems like a bargain, but then he offers, “I’ll do anything for your love.” Uh-oh, now he’s in for it. This is a damn good rock song, and a nice opener. “What Love Can Do” also has something of a 1960s pop rock vibe, with a delightful innocence mixed with a bar sound (which you don’t really associate with innocence). “Then I fell in love with you/And you know what love can do/When I fell in love with you/I didn’t have a clue.” This is a song that was recorded earlier under the Older Than Your Parents band name. “The Road Of Love” too has that delightful innocence. This song offers a pledge of love, which is timeless: “You know that I love you/I’ll always be true/You know that I love you/No matter what you do.” This tune features some nice work on saxophone and keys. (Paulie Cerra plays saxophone on this CD.) This song has a false ending, then kicks back in, but with a much slower groove.

“Say Ya Love Me” has a different feel, reminding me a bit of The Cars. By the way, while the title is “Say Ya Love Me” on the back of the CD case, it’s listed as “Say You Love Me” on the inside. I’m not sure which title is correct. And then “Time Marches On” has a Beatles influence that is apparent right away, even before we hear the direct references to George Harrison and his songs (“Here Comes The Sun,” “While My Guitar Gently Weeps,” “My Sweet Lord”). This song uses a hook from Harrison’s “Love You To,” and also quotes lines from that song (“I’ll make love to you/If you want me to”). There is a very positive feel to this tune, that great music and musicians won’t be forgotten, that the music still has an impact and importance. This is a song that was written by Michael Raz Rescigno, with a different version released on a 1987 compilation, The Best Of Los Angeles 1987. Joey Molland was on that recording as well.

“You’re My Love” stands out for some obvious reasons. First off, it features female vocals. Also, it has more of a folk feel, mixed with pop. So it has quite a different sound, and ends up being one of my absolute favorite tracks. There is something so sweet and delicious about this song, which was written by Michael Raz Rescigno. Here is a taste of the lyrics: “When you kiss me in the morning/And we greet the day/I can tell it’s a good one/You’re here to stay.” This one also has a sort of false ending. And “The Paths That We Take” has something of a country vibe. This is a sweet, positive tune. “The paths that we take/Aren’t always what they seem/It might not go the way you planned/It might not be your dream/The wind that blows late at night/When the clouds are moving fast/A slow freight train from New Orleans/Reminds me of my past.” And I love when the horns suddenly come in, a wonderful surprise that works really well. This is another of my favorite tracks. It really grew on me, and I love it more and more each time I listen to this album.

There is a certain amount of nostalgia in much of this music, with its 1960s flavors. And toward the end of the album they have a song titled “High School Reunion,” about the passing years. “Ten years, I couldn’t believe it/Twenty years, I had to see it/Thirty years, fifty years/Been to a high school reunion.” This tune has a great classic rock and roll vibe, particularly during the instrumental section, and I love the keys. “The girls from the park, they still rule.”

As I mentioned earlier, “Love Me Do” is the Badfinger song, not the Beatles song. Of course, Badfinger is a band closely associated with The Beatles, signed to their Apple label, and with some material written and produced by Beatles members. But this tune was written by Joey Molland. It’s followed by “Shoot ‘Em Up,” which is also an older song, originally appearing on Joe Vitale’s album Roller Coaster Weekend. It’s a cool tune. The album then concludes with “When Dogs Fly South,” a kind of humorous song making light of the unlikelihood of the band having a hit, with some of the vocals performed by a child. The song mentions the band members by name. At the end, there are animal sound effects, ending with the rooster from The Beatles’ “Good Morning Good Morning” (and then a quick bit of that song).