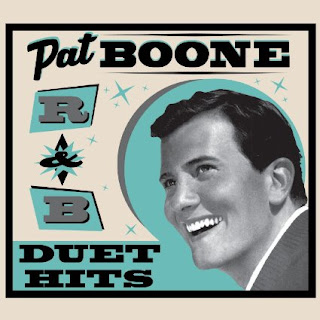 R&B Duet Hits finds Pat Boone covering some classic soul songs as well as some disco tunes. And why not? Pat Boone has tried a lot of different things in his career. Remember his heavy metal album? On this one, he is paired with some of the folks responsible for these well-known songs, each song presented as a duet. Though it’s mentioned nowhere on the packaging, this CD was actually released earlier under the title We Are Family: R&B Classics back in 2006. If you missed it then (as I did), you can check it out now.

The album opens with “Papa’s Got A Brand New Bag,” with James Brown himself joining Pat Boone. But actually, before the song starts, there is a very goofy introduction, which sets a bizarre tone, like telling us we shouldn’t take this album at all seriously, that it’s all a bit of a joke. I mean, the line “I’d like to know, are you ready for some super dynamite soul?” is even followed by some brief fake applause. Some of the songs we’re going to hear are then listed. Positively silly. The version of “Papa’s Got A Brand New Bag” is a bit odd, with pop vibes. And at one point James Brown sings, “Pat got a brand new bag.” What are we to make of this? I’m not sure. It’s so strange to hear Pat Boone and James Brown trading riffs at the end, like when James urges, “Get funky, Pat.” And Pat jokes about doing the splits: “Help me up now, man.”

That is followed by “Soul Man,” with Pat Boone joined by Sam Moore (the Sam of Sam & Dave, who had a hit with the song). And actually, it sounds like this rendition begins with the opening of the original recording. So, can we believe Pat Boone when he sings that he’s a soul man? Obviously, there is something comedic about this, which is amplified a bit by the fun backing vocals (“shadoop shoop shoop”). But it’s cool to hear Sam Moore.

Boone then dips into disco with KC And The Sunshine Band and their song “Get Down Tonight,” and suddenly I’m dancing around my apartment to Pat Boone. Life is strange, isn’t it? By the way, I saw KC And The Sunshine Band in concert several years ago, and they were fantastic. Seriously. Pat at one point asks us, “How low can you go?” It’s odd for someone as homophobic as Pat Boone to cover disco songs, but there you have it. There are more dance vibes with Pat Boone’s odd rendition of “Celebration,” in which he actually sings, “Getting jiggy with it, getting jiggy with it, getting jiggy with it.” On this track, Boone is joined by Robert Bell of Kool & The Gang.

Ray Parker, Jr. joins Pat Boone for “A Woman Needs Love,” Raydio’s big hit from 1981. Here Pat Boone sings, “Don’t make the mistake of thinking old fashioned/Times have changed from yesterday.” Okay then. Pat Boone then sings “We Are Family” with Joni Sledge, one of the sisters of Sister Sledge. And again, it opens with some silliness, a bit of spoken word: “Hey, live it up, you all/And hand me some of that mayonnaise/Who put the anchovy in here?” Oh yes, sounds like a crazy party. And then they sing, “I’ve got all my brothers and my sisters with me.” Joni sounds great, by the way. At one point she sings, “Sing that funky music, Pat Boone” (to the line “Play that funky music, white boy”), and Pat responds, “I’ll sing it for you, Joni.”

This album actually ends with an original tune, “Backbone,” which Pat Boone wrote with David Diggs. Kool Moe Dee joins him on this one. I don’t care for rap, so this track doesn't really work for me. It’s also the longest track on this CD, approximately seven minutes.