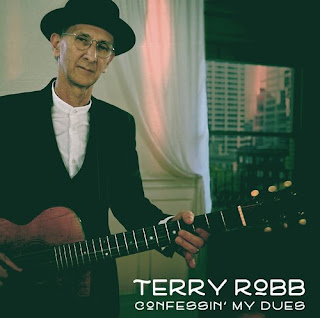 Terry Robb can play the hell out of a guitar. And he can cover a decent range of musical genres while doing so, including blues, country, ragtime, jazz. He’s received a lot of awards for his talent, and deserves them all. It’s really a joy to listen to him play. And isn’t that what we’re looking for these days, a little joy? His new album, Confessin’ My Dues, features original material, with Terry Robb playing acoustic and resonator guitars and providing the vocals. Joining him on this release are Dave Captein on standup bass, and Gary Hobbs on drums.

The album kicks off with “Butch Holler Stomp,” a delicious, totally enjoyable guitar instrumental with some fantastic playing, all but guaranteed to raise your spirits. And isn’t that the order of the day? Every day, really. Just sit back and let this great guitar work obliterate your troubles. That’s followed by “Still On 101.” Ah, of course a tune titled “Still On 101” would have to be blues. Still it has movement, this song does; after all, it’s not called “Still on 405.” Though Terry Robb is likely referring to the part of 101 that is in Oregon, since that is where he resides, and not the stretch here in Los Angeles (we sometimes forget that roads actually leave Los Angeles). Anyway, this is another excellent guitar instrumental track. I am totally digging this music, and it’s difficult for me to imagine someone not digging it.

“How A Free Man Feels” is a blues song that moves at a good clip. “I wish I could know how a free man feels/I would do anything to know how a free man feels/I would brave the darkest night, fight an angry sea/Walk a thousand miles, crawl back home on my knees.” The song seems to be getting somewhere, going in a different direction at the end, but is suddenly over. Then “It Might Get Sweaty” thumps its way in with a good groove. This is an instrumental with a strong pulse, and more wonderful work on guitar. It might get sweaty, indeed! Things get a little crazy on guitar for a bit, and I am enjoying every moment. That’s followed by a good heavy blues number, “Heart Made Of Steel.”  “Sometimes a man should cry/Don’t try to hold back your tears/Sometimes I wish/That my heart was made of steel.” A good topic for a blues number, don’t you think? For with a metal heart, you wouldn’t have any blues, right? Ah, but the blues is what makes you feel better. And, guess what, this track features more impressive work on guitar. I just love hearing this guy play, and, holy moly, it just gets better and better. “Now Vestapol” is another fantastic guitar instrumental, with some interesting changes. This one was written by Terry Robb, John Fahey and Robert Wilkins.

“Darkest Road I’m Told” is a good blues tune about Highway 61 (re-revisited?).  “That 61 highway, it is the darkest road, I’m told/But there will be no highway to go down that road alone/Don’t need to leave your doorway to be surprised at what you do.” That’s followed by “Three Times The Blues,” a totally delicious blues tune with a steady rhythm, the guitar just dancing and flying over it, the bass holding it all together. Then suddenly, the tune takes a turn and begins to rock, if only briefly, as it did in the track’s opening, before making another turn to a late-night blues vibe, with the bass taking the lead. So good, so good. This is a powerful and exciting instrumental number. Then “Confessin’ My Dues,” the album’s title track, is a lively number with some pep. “Church bells ringing in the morning/Been up all night confessin’ my dues/Rain outside been pouring/Lookin’ for the sun to come bustin’ through.” Oh, those nimble fingers, just listen to them play during that instrumental section.

“Death Of Blind Arthur” begins as a slower, somewhat more relaxed, but emotionally moving instrumental track. Terry Robb then suddenly picks up the pace, and this tune becomes totally fun. I like the way these songs take turns, and even a drastic change seems so natural, so right. That’s followed by “High Desert Everywhere,” a great, raw blues instrumental track. Then “Keep Your Judgment” goes in a different direction, and might be the oddest song on the album, just because it’s so unlike the others, with more of a country feel, and even a bit of an early rock and roll thing. “Keep your judgment for another day/Don’t want to hear another word you say.” Adam Scramstad plays electric rhythm guitar on this track. This disc concludes with another cool guitar instrumental, “Blood Red Moon.”

CD Track List
Confessin’ My Dues is scheduled to be released on May 31, 2019 (though apparently there was a limited release on March 1st in Portland).
Posted by Michael Doherty at 9:02 PM