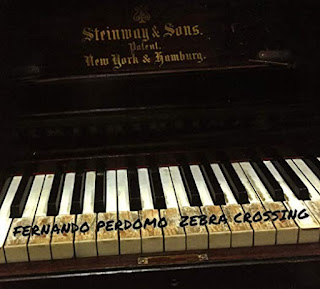 Fernando Perdomo is a singer and songwriter originally from Florida and now based in Los Angeles. He plays several instruments, and his work can be heard on albums by artists like Cait Brennan, Chris Price, James Houlahan, and Emitt Rhodes. He also has his own solo career, and his new album, Zebra Crossing, features mostly original material. All but one of the disc’s tracks were written or co-written by Fernando Perdomo. Though he plays a good deal of the instruments on this release, he does have some guests joining him on certain tracks.

Two of those guests are Kaitlin Wolfberg and Ruti Celli, and you can hear their wonderful work on violin and cello respectively on the disc’s opening track, “I’m Here.” The song begins with strings, setting a beautiful tone. And when the song kicks in, it has a sweet vibe that I appreciate. The lyrics express perhaps an uncomplicated idea, but one we can easily latch onto: “I’m here/Won’t you open up the door/I’m here/There’s so much we can explore.” It’s a song that reaches out a hand, or wants a hand extended to it. It ends with the lines “I’m here/There’s no place I’d rather be/I’m here/It’s just you and me.” Yes, that’s what it’s all about, isn’t it? This song was written by Fernando Perdomo and Cyndi Trissell. It’s followed by “Sometimes I Feel Like Nothing At All,” a title I really like. So many of us are down these days, exhausted by the troubles and hatred in the world, and feeling powerless to stop it all. This song seems to offer comfort simply by being there with us, expressing some of that weariness, some of that confusion. “I am what I am/What am I not/Am I here?/Am I there?/Am I really anywhere?” And the repeated title line “Sometimes I feel like nothing at all” will a strike a chord with a lot of us. This song also features Kaitlin Wolfberg on violin and Ruti Celli on cello. It was written by Fernando Perdomo and Stephen Kalinich.

Then Fernando Perdomo delivers a rock and roll song to lift us up a bit. Titled “Find Love (Hold On),” the vocals to this one have a sweet sound. Danny Ayala joins Fernando on vocals and keys on this track. I really dig his work on keys. “Somehow” is one of the album’s most powerful and moving songs. This one was co-written by Zak Nilsson, who clearly possesses some of the songwriting talents of his father. This track has a sad, beautiful, hopeful vibe. “But I guess it just doesn’t matter no more/I find myself floating with you.” That’s followed by “Not Meant To Be,” an instrumental track. There is something loving about this sound, like a voice promising to help ease our troubles, which seem to surround us. We’ll make it through, right? There is also something familiar about the sound of this one. The only other instrumental track on this release is its title track, “Zebra Crossing,” which has kind of a cheerful feel at the start, and goes through some changes. Toward the end, it develops something of a Beatles vibe.

Perhaps my favorite track on this album is “Smile,” a beautiful track featuring some absolutely gorgeous work on strings. Something about this song feels like it could break me, even as it encourages us to smile. “Sadness don’t look good on you/Smile, smile, smile/Even if it hurts.” This song feels like a friend. You know? Another of the disc’s highlights is “Crown Of Stars,” written by Fernando Perdomo and Zak Nilsson. This is a beautiful song about the end, and about not being ready for it. It is moving, yet also has catchy elements. And that cello gets right to my heart. “Taking life day by day/Watching you steadily fading away/You were brave/We fought back/Knowing that nothing we fought for would last.” Oh god, how are those for some heartbreaking lines, expressing the futility of everything. Yet we can’t give up.

I’ve mentioned this before, but I need to make a mix CD of songs titled “Home.” Something about the concept of home draws out some of the best work of many songwriters. Fernando Perdomo’s “Home” is a gorgeous track. Here is a taste of the lyrics: “And even if I lose my home/It will be standing tall/’Cause every time I close my eyes/Home would be there in my mind.” And if you’re looking for other good tunes with the title “Home,” check out songs by Ellis Paul, Erica Blinn, Michelle Malone, The Evangenitals, The Spongetones, The Ides Of March, Joe Walsh, James Houlahan, Janiva Magness, Iggy Pop and Anton Fig. The album’s final song is a cover of The Beatles’ “While My Guitar Gently Weeps,” the only cover on this release. This album was recorded at Abbey Road Studios, on the fiftieth anniversary of the recording of the first version of this song. On this track, Fernando Perdomo is joined by several guests, including Dave Bainbridge on piano, Dave Kerzner on organ and mellotron, Mark Murdock on percussion, Paul Stacey on bass, and Andy Mapp on drums. Diane Birch, Shawn Lee, Jason Rowe and Daphna Rowe join Fernando on vocals. It’s a really good rendition.