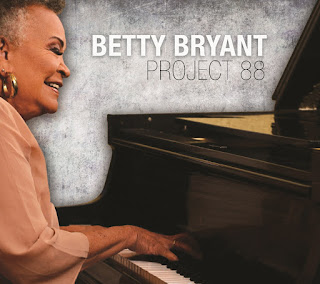 Does music keep us young? Does it keep us active? Maybe so. Vocalist and pianist Betty Bryant’s new album is titled Project 88 because she turned 88 last year (as well as because there are 88 keys on the piano), and this album is pulsing with excitement and joy. It is vibrant and fun. Joining Betty Bryant on this release on various tracks are Tony Guerrero on trumpet, Thomas Gargano on bass, Richard Simon on bass, Hussain Jiffry on bass, James Gadson on drums and vocals, Kenny Elliott on drums, Quentin Dennard Sr. on drums, Robert Kyle on tenor saxophone and flute, Ryan Dragon on trombone, Jeff Driskill on alto saxophone, Jay Mason on baritone saxophone, Casio Duarte on percussion, and Kleber Jorge on guitar and vocals. The songs chosen for this CD are a mix of originals and covers.

Betty Bryant opens this release with an original composition, “Love Came And Went,” a totally enjoyable number, the horn section giving it a big band flavor. “He was funny and charming/But it was alarming/How quickly it turned to ennui/Love came and went/And nobody noticed but me.” This is a song that Betty has recorded before, with a different arrangement. It was included on the album What’s The Point? by the Betty Bryant Trio. That’s followed by a wonderful, lively instrumental rendition of “Oh, Lady Be Good” by George Gershwin and Ira Gershwin. Once again, you can never go wrong with Gershwin. This trio version features a delicious bass solo followed by a cool drum solo. Then comes my personal favorite track of the album, “Catfish Man,” an original composition. This tune is seriously cool, and has a bluesy edge and a good groove. There is something delightful and adorable about a woman who is close to 90 singing about editing images on an online dating service, particularly as she also wrote this song. “You looked so fine/When I saw you online/Then I found out it was just Photoshop.” I love her vocal delivery and I love Robert Kyle’s work on saxophone. On top of all that, Betty delivers a marvelous lead on piano in the second half of the track. This tune is just so bloody cool.

I’ve always enjoyed “Just You, Just Me,” and it’s difficult to think about it now without images from Woody Allen’s Everyone Says I Love You popping into my head (if you haven’t seen that film, you should certainly check it out). Here it is performed as a duet with James Gadson, who also plays drums on this track, and it’s a delight. This rendition also features some wonderful work on trumpet and flute. There is also some nice stuff on bass. This track ends with James Gadson saying, “It’s wonderful, it’s wonderful.” I agree. Another of the disc’s highlights is “Ain’t Nobody’s Business.” That horn that starts this one off is just perfect, and makes this track a favorite of mine within its first twenty seconds. This is a wonderful rendition, with a great groove. And the lines “Because I’m three times seven/And that’s almost twenty-two/And it ain’t nobody’s business what I do” have a certain playful humor to them, considering her age. And there is a playful quality to her delivery of other lines as well. I also love that moment when her piano takes control halfway through, some fantastic stuff there. Plus, this track features some cool work on drums. But that trumpet is really the star here.

The album concludes with two more original compositions, the first being “My Beloved,” a pretty and romantic instrumental number featuring some nice work on flute. Betty Bryant had previously included this song on Just Us. Quentin Dennard Sr. and Cassio Duarte are on percussion for this one. Then “It’s Hard To Say Goodbye” is a romantic yet playful song, mentioning “cinnamon toast” and “ice cream at midnight.” But the lines from that opening section that really stand out are: “You’re ooh, you’re ah/You’re baklava.” After a minute or so, it kicks in. This is a delightful number with a full horn section. Betty Bryant previously included a different version of this song on Iteration.

CD Track List
Project 88 is scheduled to be released on January 11, 2019 through Bry-mar Music.
Posted by Michael Doherty at 3:26 PM