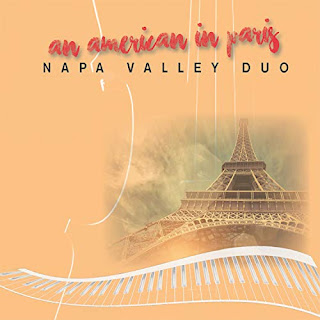 The Napa Valley Duo is made up of Jeffrey McFarland-Johnson on cello and Terry Winn on piano. Their new album is An American In Paris, out now on IAC Records. While, as the album’s title indicates, the duo covers some well-known material, this release also includes several original compositions, written by Jeffrey McFarland-Johnson. Interestingly, both of these talented musicians have had careers as teachers. An American In Paris follows their 2016 release, A Soft Message To You.

The album begins with a short piece, “Hotel,” written by Francis Poulenc for voice and piano. Here, Jeffrey McFarland-Johnson’s cello takes on the vocal line. It has a somber beauty. That is followed by a playful, wonderful, lively rendition of Gershwin’s “An American In Paris,” the title track. I believe I’ve mentioned this once or twice before, but you can never go wrong with Gershwin. And certainly the Napa Valley Duo proves that here. The piece was written for many instruments, and sometimes versions have a full and busy sound. Here played with just two instruments, the approach and sound are different, though the excitement is still there. The cello and the piano feel like two characters, engaged in a tale, and taking some joy in the telling of it. In addition to being the album’s title track, it is also, at fifteen minutes, the longest piece of music on the disc. There are different sections, with different vibes, different themes, as the tale progresses, as these two characters venture to different places. This version once again shows just how excellent Gershwin music is. Plus, well, I suppose I should mention again that I am a sucker for cello, and my love for that instrument must certainly be a part of my love for this rendition. Now I want to hear Napa Valley Duo tackle “Rhapsody In Blue,” my favorite Gershwin composition. There seems to be a hint of it on piano on this track.

Napa Valley Duo delivers a beautiful, gentle rendition of “It Never Entered My Mind,” a piece written by Richard Rodgers and Lorenz Hart. Their version takes its inspiration from the 1954 recording by Miles Davis Quartet heard on Vol. 3. Then we get into some of the original material, beginning with “Prelude Perfume.” There is something a bit unsettling, fanciful and even eerie about this piece. That’s followed by “A Soft Message To You,” another original composition, though perhaps owing a bit to “An American In Paris.” This one has its own beauty, and is a piece that was included on the duo’s 2016 release, functioning as the title track to that album. We then get the most surprising track of the album, “Star Trek Anthem/I Love Lucy.” This medley is one of the oddest pairings I’ve heard. And yet this piece combines them well, particularly at the end. I completely love this. Yeah, I’m a fan of both shows (particularly Star Trek), but you don’t need to be one to enjoy this track.

“Meritage Estate” is an original composition that begins rather gently, but has some intense and startling moments. Then “Preparing For The Day” comes in with a bright, lighter, pleasant and uplifting vibe. The moment it starts, I find myself smiling. If this is the start to the day, then the day is bound to be a good one. That’s followed by a more somber and thoughtful piece, “Vesper For Janelle,” and then by “Chimera,” an interesting tune that was also included on A Soft Message To You. We then get another unexpected cover and combination of material, “See Me Feel Me/I Will Fight And Never Slack.” Yes, “See Me, Feel Me” is the song from The Who’s Tommy, the vocal line beautifully performed on cello. The track suddenly changes gears as it shifts into “I Will Fight And Never Slack,” which has something an insistent tone and a surprising power. The track then returns to “See Me, Feel Me.” The disc’s final three tracks are beautiful pieces, beginning with Giacomo Puccini’s “Moderatamente,” and followed by “Romanza,” from Mozart’s “Piano Concert No. 20 in D minor.” This magnificent and moving piece is one of my personal favorite tracks.  The album concludes with “The Lady Caliph,” a gorgeous piece composed by Ennio Morricone for the film La Califfa. This is an excellent rendition.

CD Track List
An American In Paris was released on November 9, 2018 on IAC Records.
Posted by Michael Doherty at 10:50 PM