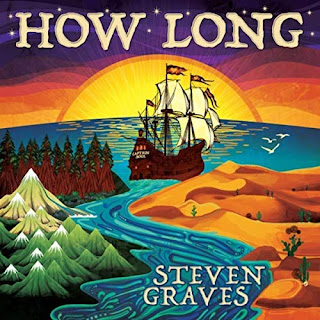 Steven Graves’ new album, How Long, is a great mix of rock, country and soul, featuring original material. With one exception, all the songs on this release were written or co-written by Steven Graves. His band includes David Mendoza on bass and backing vocals, Robert Melendez on bass and backing vocals, Travis Cruse on guitar, James Mikey Day on keys, Bryant Mills on drums, and Jim Greiner on percussion, along with a whole lot of other folks on various instruments on different tracks.

The album kicks off with its title track, “How Long.” It has a fun vibe right from the start, with something of a 1960s pop flavor to that opening. It then develops into a good, easygoing rock tune with country elements. I appreciate these lines: “Mother Nature, she sure is on the run/She’s trying to make it through the damage that we’ve done.” That damage seems more extensive every day. The sooner the current administration is buried, the sooner we can get back on track with regards to the environment. “How Long” is followed by “Good Day.” This one has a bit of a funky edge to the groove, which I dig. And then check out those great backing vocals, which rise up with a glorious gospel sound, adding more than a dash of soul to the song. Veronica McWoodson and Kellie McCoy Anderson sing on this track. I also really like that lead on organ halfway through. “It’s a good day,” indeed!

“Let It Reign” also has a strong soul vibe and a positive message. “No need for anger, restitution or blame/The color don’t matter, we’re all the same.” Yeah, it might seem a simple idea, but these days it is needed. Seriously, what went wrong with this country? I know we’re all looking forward to the day when Donald Trump is behind bars. But that will be just the beginning of our work. There is a lot of healing to be done. I am hopeful that it can be done. Then we get into reggae territory with “People Rise Up.” Reggae is known for delivering positive vibes and empowering messages, and so it is fitting that we turn to that kind of music in these days of intense division and hatred. “Take back our hearts/Take back our minds/When we all unite/Power we will find/Let the people rise up/Let the darkness go away.” Plus, this track features a horn section, which I love. Armen Boyd is on sax, Becky Dees Boyd is on trombone, and Robin Anderson is on trumpet. “All of the people choose love over fear/Let the sun shine again/Let the water flow so clear.”

Last year, Steven Graves released an album titled Captain Soul. On that album, there was no title track. Now on his new album Steven Graves gives a song titled “Captain Soul,” a warm, easygoing tune that offers this advice: “Follow the stars until your dreams come true.” This song has perhaps a nod to the Grateful Dead in the line “So many roads we go down, down, down.” This track also features a really good instrumental section. Luca Fredericksen is on keys, and Jim Coulson is on drums. And speaking of the Dead, the album’s sole cover is a nice rendition of “Sugaree” that has a happy, soul feel, and features some nice work on keys. And I love those backing vocals, reminding me more of the Jerry Garcia Band sound than that of the Dead. Veronica McWoodson, Kellie McCoy Anderson and Keith Greeninger sing on this one. And, hey, there is another Grateful Dead connection here: Dennis McNally is part of Steven Graves’ publicity team.

One of my personal favorite tracks on this disc is “Fool For You,” a beautiful country love song with pedal steel (that’s BJ Cole on pedal steel). The song is presented as a duet with Sasha Dobson, and is moving and wonderful. It’s a song I’ve already listened to many times, and expect to listen to a lot more. “If you love me forever/Darling, I’ll love you so true/Nobody knows me better/Baby, I’m a fool for you.” This one was written by Steven Graves and Keith Greeninger. BJ Cole returns on pedal steel for the disc’s final track, “Fly To The Stars,” a beautiful, uplifting country song. This one was written by Steven Graves and Rob Owen. “Take my hand and take my heart/I’m giving it all away so we can fly to the stars.”