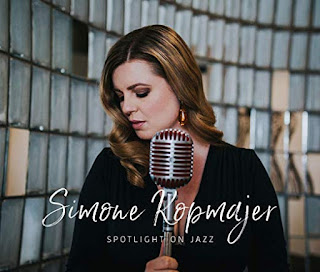 Vocalist Simone Kopmajer, born in Austria, has been putting out albums for fifteen years, not only recording and performing beloved standards, but also her own material. Her new release, Spotlight On Jazz, is a mix of standards and originals, her voice friendly and beautiful as she delivers some gentle, soothing, romantic yet fun jazz. Joining her on this album are Terry Myers on tenor saxophone and clarinet, Paul Urbanek on piano, Martin Spitzer on guitar, Karl Sayer on bass, and Reinhardt Winkler on drums.

Simone Kopmajer opens the album with an original composition, “Spotlights,” which she co-wrote with Karolin Tuerk. This song has a delightful, bright vibe, which is interesting since she sings “It’s all right, it won’t be long/Time will bring a happier song.” After all, it feels that this is the very song she is promising. This is a song offering some comfort, even joy, and it’s a great start to the disc. It’s followed by a cover of “Pennies From Heaven,” a song written by Arthur Johnston and Johnny Burke, and made famous by folks like Bing Crosby and Billie Holiday. Simone’s voice is warm and welcoming, as if ushering us into a more perfect world. I’m also quite fond of Karl Sayer’s work on bass here. Then “You Don’t Call Me” is an original song written by Paul Urbanek and Karolin Tuerk. It has a lonely late-night vibe at times, fitting lines like “Silence creeping/Through the sheets I sleep in/And I know that I’m missing you.”

“Mighty Tender Love” is a fun number written by Simon Kopmajer, with a more upbeat groove. Something about this one makes me feel really good. Perhaps it’s because it makes me think of my girlfriend. “But I can’t believe that you’re the one I get to kiss/Oh, lucky me, I’ve found you.” And I love the instrumental section with the horn taking over, followed by a really nice lead on guitar. This is a song that reminds us of how good life can be, and lord knows we need as many of those as we can get these days. That’s followed by another song that was recorded by Bing Crosby, “Poinciana.” Simone Kopmajer’s rendition has a sweeter vibe, which I love. I really appreciate these late-night jazz gems, maybe because the world seems more peaceful at night, when we’re left to our own thoughts, and our responsibilities are few. The politicians are asleep, and so can do no more harm, at least not until morning. Don’t we just want to dwell within the span of a song like this one? The warmth and beauty of her voice seem to cradle us and say “Everything is okay.” And I love that lead on saxophone. Simone then turns more playful with “Dig That Riff.” I particularly enjoy Paul Urbanek’s work on piano on this track. There is a nice flow to that lead, as well as to Martin Spitzer’s lead on guitar. This one was written by Paul Urbanek and Karolin Tuerk. Simone sings, “Hey, it’s crazy/The music hasn’t started yet.” No? This disc includes a second version of this song, a remix with a funkier groove.

“Remember Jeannie” is an original composition about the television series I Dream Of Jeannie, perhaps an odd subject for a song, certainly an unexpected one. There is something sweet and adorable about this track, and it features some good work on piano, as well as some fun stuff on drums. “Out of a colored cloud of smoke/Appeared a genie, oh so cute/Who couldn’t wait to kiss her master/And make his wish come true.” This one was written by Simon Kopmajer and Karolin Tuerk. Perhaps the most adorable vocal performance of the whole album is that on “Exactly Like You.” It begins with her vocals accompanied only by percussion, a nice touch, and then even includes a bit of scat. I also love the clarinet. This is such an enjoyable song. It was written by Jimmy McHugh and Dorothy Fields, and has been recorded by a large number of artists over the years, including Louis Armstrong and (yes) Bing Crosby. That’s followed by an original number, “A Gift From Buddy,” written by Terry Myers and Simone Kopmajer. This one has a delicious, late-night, intimate vibe that draws you in. A gorgeous, romantic song that features a gentle lead on sax. This song is in no rush, but rather feels like a nice long embrace. “Then you were walking by/Like an angel to the melody/Lights shining down upon your face.” “We’re Goin’ In” is the final original song of this release, written by Terry Myers and Simone Kopmajer. It’s a fun tune with a good, cheerful groove. Ah yes, things are just beginning to move, and optimism is high. And I love Martin Spitzer’s work on guitar. “You know we can’t be so dull/We’ve got a cooler full.”

CD Track List
Spotlight On Jazz was released on November 9, 2018 on Lucky Mojo Records.
Posted by Michael Doherty at 11:16 PM