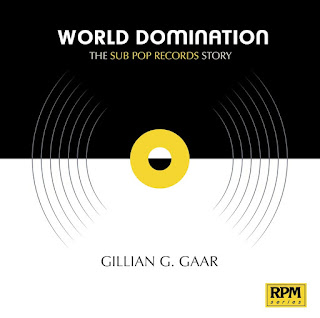 When I first came across the record label Sub Pop in my late teens, I thought the name meant music that is not is pop but is lurking below pop, ready to strike. Or like a joke that the music on the label wasn’t as good as pop, sub-pop in quality or something. I didn’t realize right away that it meant Subterranean Pop, as I hadn’t been aware of Bruce Pavitt’s magazine of that name. But thanks to Gillian G. Gaar’s new book, World Domination: The Sub Pop Records Story, I now know the story of the record label that gave the world Nirvana and other influential bands. World Domination: The Sub Pop Records Story is the first book in in the RPM Series, books that explore the world of important record labels.

The book was released late last year, the year that saw the label’s thirtieth anniversary. But it begins with a prologue giving some details of the twentieth anniversary celebration of the label, which occurred in Seattle in 2008. It then goes back to the beginning, or perhaps even before the beginning, when Sub Pop co-founder Bruce Pavitt heard a new record by the Sex Pistols at a barbecue and noticed the immediate reaction of those who had gathered, saw that “music really had the power to provoke” (p. 1). It is interesting that Bruce began using the name Subterranean Pop very early on, long before the label officially came into being, using it as the name for his radio show, and then for his fanzine (the title of the latter was soon shortened to Sub Pop, and compilation cassettes were released). The evolution of Sub Pop and Bruce’s work is fascinating, especially to those of us for whom music plays such an important role. Clearly Bruce Pavitt is moved by music as much as the rest of us, and his journey is one that speaks to that love of music in all of us.

But of course the story of Sub Pop is not the story of just one man. Label co-founder Jonathan Poneman is also someone who is truly moved by music. This book mentions the first time a song thrilled him. He was ten years old, and the song was “Magic Carpet Ride.” These are folks with a life-long passion for music, and that shows in the way they handled the business, and in the people who were drawn to work for them and with them. The book does include some information on the bands that were part of that Seattle scene, groups like Soundgarden and Nirvana, but of course focuses on their stories in relation to the story of the label. Author Gillian G. Gaar also gets into the stories of several other important employees of the label.

The book contains a lot of information on the label’s financial woes, and how a Mudhoney release and Nirvana’s Nevermind fixed all that. I appreciate the label’s sense of humor, obvious in its motto, “Going out of business since 1988” (a motto that has more than a bit of truth to it, as most good humor does) and its “Loser” T-shirts. I also appreciate the material on the Sub Pop Singles Club, which was aimed at those with the collector gene (I count myself among them, and can’t help but love this marketing strategy – and can’t help but wish I had subscribed, even though I honestly never cared much for the so-called “grunge” music). Other interesting promotional strategies are detailed here, such as having Mudhoney play on top of the Space Needle (a record of that performance was released on vinyl as part of 2014’s Record Story Day). What is also interesting is the way the internet has changed the music industry and the way people approach music, with one of the label’s employees contending that “organic regional scenes can no longer occur” (p. 139). I don’t necessarily agree with that assessment, for I’ve experienced at least one fantastic regional scene in the days since the internet took hold. But certainly things have changed. Yet, Sub Pop has remained and thrived, even branching out into comedy albums. By the way, this book does include a section of photos, including covers of Subterranean Pop magazine and compilations.

World Domination: The Sub Pop Records Story was released on November 20, 2018 through BMG Books.
Posted by Michael Doherty at 1:38 PM