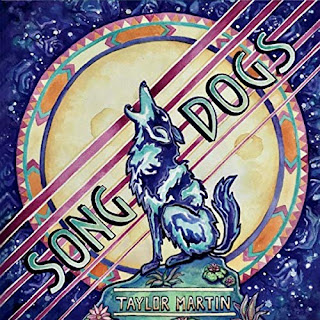 Taylor Martin is a singer and songwriter based in Asheville, North Carolina. On his new album, Song Dogs, he delivers a damn good mix of folk, country, rock and pop. The disc contains mostly original material showcasing his songwriting talent, but also a few good choices of covers. Joining him on this release are Matthew Dufon on bass and backing vocals, Richie Jones on drums and percussion, Josh Shilling on keys, Aaron Woody Wood on guitar, Matthew Smith on electric guitar and pedal steel, Aaron Ramsey on guitar and mandolin, Lyndsay Pruett on fiddle, and Amanda Anne Platt on backing vocals.

The album opens with “Little Pictures,” a seriously enjoyable tune featuring some wonderful work on keys, plus a delicious rhythm at its base. Taylor Martin’s vocal delivery has something of a Dr. John rough and cool quality here. “Me, I love to keep my eyes closed/I love it when you close yours too/One so that they think you’re sleeping/While the other one’s looking, baby, right at you.” Toward the end, this track also features some good stuff on guitar. While there is a bit of a bluesy vibe to this song, the following track, “Here Comes The Flood,” has more of a country pop feel. “You’d better run for cover/No better cover than your man/Baby, if I’m him, let me help you to understand.” Amanda Anne Platt provides some backing vocals on this track.

“Eden Colorado” has a wonderful, kind of quiet folk vibe, and features some really good lyrics, with lines like “I make her laugh one time/To leave her memory behind” and “I’m looking for a dream somewhere deep inside of me” standing out. But probably my favorite line is “But out there on these highways every sign it reads do not worry about me.” I also love the guitar work on this track. This is a hopeful song, and is one of my personal favorite tracks.  That’s followed by one of the album’s three covers, Neil Young’s “Music Arcade,” a song from Broken Arrow. Taylor Martin’s rendition has a more cheerful and lively country sound, and features some nice work by Lyndsay Pruett on fiddle. Amanda Anne Platt joins him again on vocals. The fiddle is what makes “Second Sight” so beautiful. Interestingly, this love song also makes use of the image of the two having their eyes closed: “It’s all right, close your eyes/I’m going to close mine too.” A line that stood out for me the first time I listened to this song was “Help me remember when I first saw you again,” with that little pause before “again.”

Debrissa McKinney joins Taylor Martin on vocals on “Hollywood,” which is more of a pop tune with something of a 1970s vibe and some nice stuff on bass. Then Phil Alley joins Taylor Martin on telecaster for “Our Memories,” a song with a relaxed, pretty sound and more sweet work on fiddle. This track also has some nice harmonizing with Amanda Anne Platt. “This old house of earth and wood/Stood longer than we could/It always seemed too big for me/The perfect size for our memories.” That’s followed by the second of the album’s covers, Merle Haggard’s “Kern River.” The sweet nostalgic sound of the pedal steel fits this song so well. And, yes, this track also features some wonderful work on fiddle. Then “Milk And Honey” has a beautiful folk sound, with Aaron Ramsey on mandolin. “We’ll close our eyes and disappear.” I also like these lines, which end the song: “I was born a dreamer/You were born a dream.” The final cover is Bob Dylan’s “Sign On The Window,” a song from New Morning. The album then concludes with its title track, “Song Dogs,” which begins with some nice stuff on piano. This track too has its own beauty, aided by pedal steel and by what is probably Taylor Martin’s best vocal performance on the disc. “Though all the lines we’ve drawn are gone, and still we make it back.”

CD Track List
Song Dogs was released on November 16, 2018 on Little King Records. By the way, the notes on the back of the CD case are basically impossible to read. I know I’m getting older, but holy moly, you’d have to have some kind of superhero vision to make out the print there below the track list.
Posted by Michael Doherty at 8:05 AM