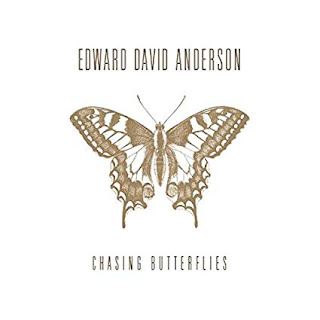 Edward David Anderson is a singer and songwriter based in Bloomington, Illinois. You might know him from his work with the band Backyard Tire Fire, which he fronted until embarking on a solo career several years ago. In 2014, he released Lies & Wishes, and then the following year released Lower Alabama: The Loxley Sessions. He’s now followed those with a new album, Chasing Butterflies. This album features all original material, written by Edward David Anderson. Joining him on this release are Jimmy Nutt on bass and percussion (he also produced the album), Jon Davis on drums and percussion, Brad Kuhn on keys, Kimi Samson violin, Todd Beene on pedal steel, and Angi Nutt on percussion.

The disc opens with “Harmony,” a joyful, kind of playful number that quickly grew on me. What I like most about this song is the work on guitar, but I also appreciate its pleasant vibe. It begins with the idea of harmony in music, and then expands from there, leading to these lines: “It’d be a beautiful scene/If all human beings could live in/Harmony.” Ah, you can’t argue with those lines. That’s followed by “The Ballad Of Lemuel Penn,” a song that recounts the true story of a black man who was murdered by racists. This story happened in 1964, but anyone who is paying attention could tell you this is still happening. And in these dark days when racists hold the highest offices in the land, this country is in danger of more racially motivated violence, for the bigots now have an official voice. “Lemuel Penn was a good man/And he died because of his own skin.” I love the violin, which is as effective as the lyrics in stirring our emotions.

“The Best Part” is a good folk song featuring banjo, an instrument that always makes me feel happy. And the tune has a good thumping beat through sections of it to help raise your spirits. In this song, he offers a pledge to be the best person he can be for the person he loves, and he knows that “The best part of me is me and you.” Check out these lines: “Without you I’m a stumbling fool/Just trying to play it cool/But I ain’t fooling no one.” “Bad Tattoos” is a cool bluesy number, and Edward David Anderson recently released a video to go along with this one. I am not at all a fan of tattoos, but I am definitely a fan of this song. It describes what could be the source of regrets, but then has these lines: “If I had to choose/I’d do it all over again.” I love the instrumental section; it has something of twisted carnival feel, which I adore, with some really nice work on keys. “It’s like a map to my soul that fades more each day/The lines will blur but they don’t go away.”

“Dog Days” has a sweet, cheerful sound right from the start. Sure, it’s a song about a dog, but it has an innocence and joy that is certainly welcome these days. “He puts up with my fits/We never get into it/And he don’t care who’s president/Not one bit.”  That’s followed by “Chasing Butterflies,” the album’s title track. It has a more serious vibe, and features Todd Beene on pedal steel. I like this song even though it uses that “self”/“shelf” rhyme, which I never care for and wish songwriters would avoid. “Sittin’ ‘Round At Home” is a delightful, relaxed folk tune about not doing much of anything, something many of us would like to do a whole lot more of.  Kimi Samson delivers some wonderful stuff on violin on this track. The CD then concludes with “Seasons Turn.” This one has a surprising opening, sounding dark, ominous, until the acoustic guitar begins to balance out the sound. Still, it produces a kind of uneasy feeling in us as we listen, unsure where it will go. But then the vocals have a sweet tone. This is a really interesting song, and ends up being one of my favorites of the album, in part because of the guitar work. There is a verse for each of the four seasons. “Winter comes, winter goes/Days it’s sunny, days it snows/Winter comes, winter goes/If there’s one thing I know.”