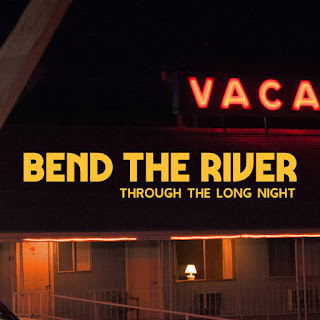 I was turned on to Bend The River several years ago when the band released So Long Joan Fontaine, an album that I love. I mentioned in my review of that CD that it came as a wonderful breath of fresh air, and it still feels that way to me. Soon after that, I was enjoying solo albums from band members like Ronok Sarkar (the band’s principal songwriter) and Norma MacDonald. Now Bend The River has released a new EP, Through The Long Night, featuring all original material written by Ronok Sarkar with Bend The River. This release was produced by Joel Plaskett and engineered by Thomas Stajcer, so there is a whole lot of talent behind this one. And it certainly shows in the resulting four tracks. The sound is a bit different from the group’s previous release, but it’s exciting to hear how these folks are evolving. I’m not sure what it is about Halifax, but it seems there is an incredible amount of talent up there. I hope to pay a visit at some point.

The EP opens with “White Line,” which fades in like the music is already in progress, and we are just entering the room. It is like the music is ongoing, and when we enter, it immediately embraces us (even if we’re a bit late). It has a warm folk and country vibe. Check out these opening lines: “Standing by the white line, the remnants of your past/Still, you’re only just your past/All the revolutions that a heart can take you ‘round/Leaves you spinning on the ground.” This song has a lot of lines that stand out for me, such as “And time won’t make things clear” and “I know, the emptiness still lingers in our bones.” That’s followed by “Remnants.” It’s always interesting to me when an album has a recurring image or idea, and the word “remnants” is in the first line of both “White Line” and “Remnants” (as well, obviously, as being the title of the latter). “We found the remnants of an old love that once sailed.” This song has a catchy 1970s-like pop vibe, particularly with that keyboard part and the backing vocals. I especially dig the bass line. That section where the vocals are supported by mainly bass and drums is wonderful.

“Another Shade Of Blue” also has a 1970s vibe, reminding me of some of Paul Simon’s work from that decade, particularly the way the vocals and keyboard interact at the beginning (think “Still Crazy After All These Years”). This track features some good vocal work, as well as another strong bass line, with touches of funk. And it too has some excellent lyrics, such as these lines: “Everything that goes away/Is still in the north sky somewhere/I still hear her voice sometimes/Through the darkness/Like another shade of blue.” The EP then concludes with its title track, “Through The Long Night,” which is the most intriguing song of the disc. It goes through some interesting changes, and features good work on keys and guitar. But the vocals and the lyrics are what make it my favorite track. “The hours roll and she drifts so far away/To all the places in her past/Where the light won’t go/It’s a sort of madness in this world she sees/But who am I to fix her dreams?/Who am I to think I know?”

CD Track List
Through The Long Night was released on December 6, 2018.
Posted by Michael Doherty at 6:33 AM