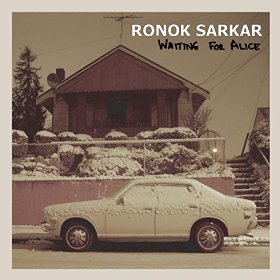 I got turned on to Bend The River a couple of years ago with the release of So Long Joan Fontaine, an excellent and delicious surprise, featuring some seriously good songwriting. All of the songs on that album were written or co-written by singer/guitarist/pianist Ronok Sarkar. Sarkar has now released a new solo album, Waiting For Alice. As you might imagine, my expectations were extremely high when I popped this disc in. And there were immediately met, and then surpassed. I love the raw, honest, open feel of this music. All of the songs on this disc were written by Ronok Sarkar, and every track here is strong. Ronok is joined on this release by Bend The River bandmate Adam Fine on bass. He also has some special guests on certain tracks.

The album opens with “All Along It Was You,” a gorgeous, mellow tune on piano, with a kind of late-night feel, a weariness in the vocals. “Wandering around half-dreaming/Not knowing what I wanted to be/Finding your shadows/Looking back at me/And all along it was you.” And then nearly three minutes in, Rebecca Zolkower comes in on violin, and there is a sweet section with the violin accompanied by some jazzy work on upright bass and piano. I wish that went on a bit longer, actually. This is a really good song. It’s followed by one with more of a timeless folk feel, with Ronok on acoustic guitar. Titled “Frank,” this song has its own quiet power and beauty. “I’ve come this far, and I won’t go back again/This emptiness was here before I came.”

One of my favorites is “Maybe This Time.” It has this gorgeous, sad yet positive, wonderful sound that I love immediately. “You can hide in the train station when the sun goes down/You can meet the midnight ladies in their gambling gowns/Sleep out by the roadside with a bottle of wine/Maybe just once/Maybe this time.” On this track, Ronok is joined by Andrew Sneddon on dobro and Scott Trivers on mandolin. I’ve listened to this song already close to a dozen times, and I just can’t get enough of it. It is followed by another favorite of mine, “Tanya Davis.” Dean Gallant joins him on banjo, and Chris Godwin is on harmonica on this track. Tanya Davis is a poet and songwriter based in Halifax (where Bend The River is also based). I love these lines about when Tanya steps onto the stage: “There’s a nervous buzz among the college-aged/You don’t know what she’s feeling or what she will say/But you know the next drink will taste different.” (By the way, you can check out some of Tanya Davis’ poetry on her website. I particularly like these lines, which end her poem “Ravish your lover while you still love her”: “I remember the days our skin was first waking/and the love we made then/like we were scorched earth/and it was raining.”)

Something about the guitar work and vocal line of “Philip” reminds me of some of Leonard Cohen’s early work. And then “The Open Way” has a cool country feel, and more of a full band sound, with Andrew Sneddon, Rebecca Zolkower, Scott Trivers, Chris Godwin and Benn Ross all contributing to this track.  It’s a really good song, and I like those touches on harmonica by Chris Godwin. “And I’ll ask you once, could you really love me/Or is it all just too much to bear.” The album then concludes with “This Fight,” with Ronok on piano, as the album opened. The song is wonderfully sad, with lines like “Let it all slip away/’Til there’s nowhere to go and nothing to be” and “Between your heart and mine/There’s no longer anything/Anything left that’s worth this fight.”

CD Track List
Waiting For Alice was released on January 19, 2016. Well, that’s the official release date, anyway. It was available digitally through Amazon on January 12, 2016. And on January 14 the official CD release show was held, and the album became available that day through Bandcamp. By the way, the album’s title comes from these songs being written while Ronok waited for the birth of his second child.
Posted by Michael Doherty at 8:20 PM