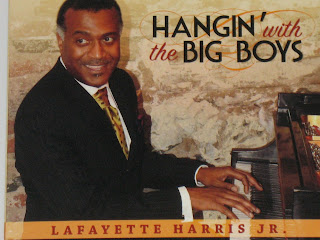 Lafayette Harris Jr. is a talented jazz pianist, and this spring will see the release of a new CD, Hangin’ With The Big Boys. Like his previous release, Bend To The Light, this new CD features a lot of original material, some of it having been previously released in different versions. And also like that previous release, Jazzmeia Horn joins him on vocals.  And unlike that previous release, this CD features Antoine Drye on trumpet, Caleb Curtis on saxophone, and Houston Person on saxophone. Bend To The Light was a trio recording, with Lonnie Plaxico on bass and Willie Jones III on drums (and with a couple of special guests). Taking over on bass on this new CD is George DeLancey, and on drums is Will Terrill.

Lafayette Harris Jr. opens this CD with a lively, joyful rendition of Irving Berlin’s “Blue Skies,” where he is joined on vocals by both Jazzmeia Horn and Noël Simoné Wippler. There is a lot of playful energy in the vocals, and there are good lead sections by both Houston Person on tenor saxophone and Lafayette Harris Jr. on piano. That’s followed by a beautiful and cool, smooth version of Duke Ellington’s “In A Sentimental Mood,” with Houston Person really creating the perfect mood with his tenor sax. I just want to drift away on that sax. Lafayatte Harris Jr. then delivers an absolutely wonderful moody lead on piano. I love this rendition, and it’s one of this CD’s highlights. (By the way, Houston Person used this tune as the title track to one of his own releases.)

We then get into the original material, beginning with the CD’s title track, “Hangin’ With The Big Boys,” a great tune that asserts itself immediately. Lafayette mentions in the CD’s liner notes that this is actually an older composition, written in the 1990s. I am particularly fond of Will Terrill’s drumming on this track. At times he creates this kind of wild, yet controlled intensity, and really drives the tune along. And both Antoine Drye and Caleb Curtis provide some wonderful stuff here.

“We In The House” is a tune that Lafayette Harris Jr. has recorded before. In fact, it was included on last year’s release, Bend To The Light, as well as on an earlier album. Clearly it’s a favorite of his. That works for me, as it’s a composition that I love too (though that hook still reminds me of The Association’s “Never My Love”). The version here is quite good, a few minutes shorter than the version on last year’s CD. This version begins with drums, as did the previous version, but quickly this new rendition sets itself apart, especially because of the presence of Antoine Drye and Caleb Curtis. (Harris’ first version was a solo recording and last year’s was by the trio.) There is some great play between the horns and piano, which I love.

Zombies sure are popular these days, even popping up in the titles of jazz tunes. “The Zombie Blues” is another original composition, and an interesting one. It begins with just piano and creates a certain, somewhat dark mood. Then the bass and drums come in, adding a somewhat chaotic element. I love what George DeLancey does on bass. (Incidentally, I just enjoyed his playing on the new CD from Svetlana And The Delancey Five, Night At The Speakeasy.) Then, nearly a minute in, the horns come in, and the song develops more of a swing, and then just builds from there, before returning to its opening at the end. This is another highlight.

“Little Kevin’s Embrace” is another original composition, and one that Harris has recorded before. It’s a cool tune, and this version features vocals by Noël Simoné Wippler (but no lyrics). It’s followed by another original composition featuring a vocalist – this time with lyrics – “Drinking Wine Blues.” The first time I popped this CD in, I had already been drinking wine for a couple of hours, and this tune hit the right spot. Jazzmeia Horn has a great loose vibe in her vocal approach. “I’m drinking my wine/I’m feeling real fine/I’m drinking my wine and feeling real fine/And doing this all of the time.” And there is some wonderful work on saxophone by both Houston Person and Caleb Curtis, as well as on trumpet by Antoine Drye. This is one of my favorite tracks. Then “The Wheelhouse” is one written by saxophone player Caleb Curtis, and it has a breezy, light feel. And check out Harris’ work on piano toward the end.

Then for the last two tracks, Lafayette Harris Jr. returns to covering some extremely well-known and beloved material. He does a delicate, sweet, pretty, wonderful rendition of “The Very Thought Of You,” led by Houston Person’s moving work on saxophone. This song always makes me think of that beautiful montage at the end of Home For The Holidays (one of my favorite movies), where it is done by Nat King Cole. And of course it makes me think of my beautiful girlfriend. When I first heard this version by Lafayette Harris Jr., I had to call her. This is such a good rendition, and is another of my favorite tracks on this CD. The CD concludes with “They All Laughed.” I’ve said it often, but it remains true: You can’t go wrong with Gershwin.

CD Track List
Hanging With The Big Boys is scheduled to be released on May 6, 2016 on Airmen Records.
Posted by Michael Doherty at 11:34 PM