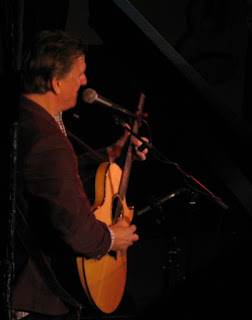 Ellis Paul is one of the greatest living singer/songwriters, and he also puts on an excellent show. I’ve seen him in concert more than two hundred times, and he always impresses me. What’s perhaps more important is that I always feels so damn good at the end of his shows. Music at its best has the power to move us, to unite us, to embrace us, to warm us, to make us hopeful and excited about our own lives and about life in general, and even to make us want to be the best people we can be. Ellis Paul’s music does this. And it does it every time.

Last night he played at McCabe’s in Santa Monica. Right before the show he met with a photographer who was going to shoot the performance. If you’ve never been backstage at McCabe’s, there are some amazing photos lining the walls, photos of artists who have played there over the years. So when Ellis began his show, he mentioned these photographs, joking that there are photos of everyone who had ever played there except him. But soon there will be a photo of him on those walls. He then kicked off the show with “I Ain’t No Jesus,” a wonderful song. “The only miracle that I’ve seen is you walking down the aisle to me.” He then talked a bit about McCabe’s, which for those who haven’t been there is a guitar shop during the day when not hosting concerts. He told the story of the guitar that he wanted to purchase there several years ago, but which was eventually bought by Neil Young.

That’s one thing about Ellis: he’s a damned good storyteller as well as singer. I’ve heard that story a few times, but it still feels fresh, still makes me laugh. After a sweet rendition of “Rose Tattoo,” he talked about Kurt Russell accidentally destroying an expensive old guitar that he thought was a prop, and then talked about his first road trip, encouraging audience members to remember their own first trips. It got me to thinking about a road trip I took to New Orleans for Mardi Gras in 1991. We had no money for a hotel, and ended up sleeping in my van at a rest stop on the outskirts of the city for a week. What the story also did was make me eager to hit the road again. The story of his road trip was the introduction to “Chasing Beauty,” the title track to his 2014 release (which was on my list of the ten best CDs of that year). From that album, he also did “Drive-In Movie,” “Love Is A Curious Thing” and “Kick Out The Lights.” “Kick Out The Lights” was particularly good, with a lot of energy, both from Ellis and from the crowd who sang along.

One song I am always happy to hear is “Maria’s Beautiful Mess.” Over the years there have been a few songs that he’s played consistently (such as “3,000 Miles” and, for a while, “The World Ain’t Slowin’ Down”), and these days it is “Maria’s Beautiful Mess.” It is one of his best songs (sometimes I think his very best), and last night in his introduction he sort of broke the song down to its components, showing how he gives it a sort of drum beat and a bass line, saying the song is like a combination of James Taylor and the Rolling Stones. He followed that with “This Is Where All Good Trees Go,” a song about McCabe’s which he improvised at a show there back in 2011, and which he’s played during at least one other show since then.

He did two covers at the show last night. The first was “The Only Way,” which was written by Mark Erelli and which Ellis recorded with Vance Gilbert for their Side Of The Road album. Ellis played harmonica on it. The second was “The Circle Game,” one of my favorite Joni Mitchell songs. He introduced it by saying, “I want to do a Joni Mitchell song for you… because it’s Super Bowl weekend.” While tuning his guitar, he also joked, “I’m going to throw this guitar away after this show.” A version of this song by Buffy Sainte-Marie is played during the opening credits sequence of The Strawberry Statement, one of my favorite films. I’ve seen Ellis play this one before, and he always does a really good job with it. It’s such a beautiful and moving song, and the audience sang along with the chorus.

While Ellis was tuning before “The Circle Game,” Lincoln, who works at McCabe’s, brought out a guitar that’s for sale, one that Ellis has his eye on, and put it on a guitar stand on stage, humorously setting it with the price tag visible. So after “The Circle Game,” Ellis played a few songs on it, including “Kiss The Sun,” which was a request. The guitar had no electronics or strap, so he sat on a stool in the audience, performing the songs unmiked, and that’s how he concluded his set.

Interestingly, for his encore, he actually improvised a song on piano, a funny song about Kurt Russell destroying the guitar, told from the perspective of the tree that became the guitar. Titled “My Big Break,” it features lines like these: “It was my big break in so many ways/Kurt Russell, is this the way you treat Goldie Hawn?/What the fuck are you on?/I’m a forty thousand dollar guitar.”

Set List
Encore
The show ended a little before 10 p.m. After the concert, Ellis had a brief photo session. So the next time you’re at McCabe’s, there should be a photo of Ellis Paul on the walls. McCabe's is located at 3101 Pico Blvd. in Santa Monica, California.
Posted by Michael Doherty at 10:37 AM