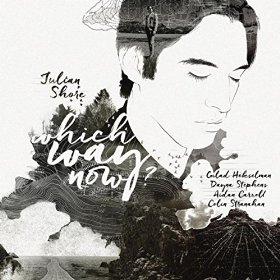 Pianist and composer Julian Shore’s new CD, Which Way Now?, features mostly original material exploring several realms and emotional landscapes. Joining him on this release are Gilad Hekselman on guitar, Dayna Stephens on tenor saxophone, Aidan Carroll on bass and Colin Stranahan on drums. He also has several special guests on certain tracks. One thing I love about this music is that these are ensemble pieces. It never feels like a musician is waiting for a turn to solo; everyone works toward the same end, supporting the main vision, while contributing some wonderful playing. That’s not to say there aren’t leads, but that the leads and solos feel integral to the pieces.

The CD opens with “Our Story Begins On A Mountain,” which has a soft, pretty and at times uplifting feel, with string arrangement by Edward Perez. I love music like this that’s able to transport us from our current space and time. That one is followed by the CD’s title track, “Which Way Now?” This is one of my personal favorites. As it begins, it creates for me the feeling of drifting into memory, the piano rising up and catching us. And then as the bass and drums come in, it’s like the memory has become the present, has taken over, and it becomes a wonderful place to be. We become invested in the world of this composition. It’s interesting that this track feels both relaxed and exciting at the same time. There is some wonderful work on bass by Aidan Carroll, and on guitar by Gilad Hekselman. Godwin Louis plays alto saxophone on this track (Louis had played on Shore’s earlier release, Filaments). “Which Way Now?” was written by Julian Shore and Jean Caze. Godwin Louis also plays alto saxophone on “Moss, Mansion, Sandstorm.”

“Back Home” has kind of a sweet groove, driven by the saxophone for the first half. And then Julian Shore takes over the lead on piano. Michael Thomas plays clarinet and alto flute on this track. There is something light and happy about this tune, helped in great part by Colin Stranahan’s drumming.

“Alpine” is the only track on this album to feature vocalists. Michael Mayo and Alexa Barchini both provide vocals, accompanied only by Julian Shore on piano. This track has an interesting, kind of unusual tone, with the two voices sometimes blending together, sometimes one supporting the other, as in conversation. “When all the world was two/Just me and you.” And the only cover on this CD is a good rendition of Dizzy Gillespie’s “Con Alma,” which begins as a piano solo by Julian Shore. Shore is then joined on this track by Jorge Roeder on bass and Samuel Torres on percussion.

My absolute favorite track on this CD is “Pine Needles,” a sweet, fun, beautiful tune that features Kurt Ozan on guitar, dobro and pedal steel, as well as Noah Preminger on tenor saxophone and clarinet. It’s such a delightful mix of jazz with country elements. It has me swaying and smiling each time I listen to it. I just love the world of this composition. The album then concludes with “Lullaby,” which is based on part of French composer Gabriel Fauré’s “Clair De Lune.” This track has something of a magical feel.

CD Track List
Which Way Now? was released on February 12, 2016 on Tone Rogue Records.
Posted by Michael Doherty at 5:35 PM