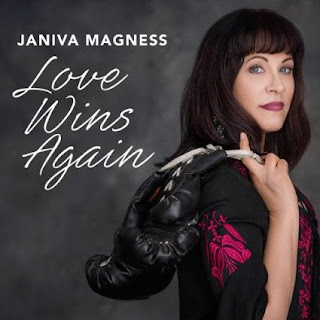 Janiva Magness is a singer and songwriter working primarily in the blues realm. And reading up her, that comes as no surprise. Her teen years alone would give her enough fuel for several blues albums. But of course it’s the healing power of the blues that draws us all to that music. Who couldn’t use a little healing now and again? And on her new album, Love Wins Again, she creates such a positive atmosphere with many of these tracks. I found myself smiling a lot while listening to this CD. This album, however, is anything but straight blues. There are soul, folk, country and rock influences here, as Janiva feels free enough to let the music take her in the direction it desires or needs to go. Most of the songs on this CD are originals, with producer Dave Darling writing or co-writing the majority. And there are some beautiful songs on this album.

The CD opens with the title track, “Love Wins Again,” a bright, positive-sounding tune written by Janiva Magness, Dave Darling and Carl Sealove. It has a great R&B vibe (and I mean real R&B, not what tries to pass for R&B these days), and gives us a promise of things improving. And listening to Janiva belt it out, I don’t doubt it. “This is where we begin/Now this is so much more than romance.” It’s followed by “Real Slow,” a song about taking one’s time and allowing one’s self to get lost in a moment. It was written by Dave Darling and Colin Devlin, and it has a cool groove. Janiva sings, “All those other people/Yeah, they’re acting insane/You know how much I want you/Got me feeling deranged/I want you so bad/I’ll do anything that you want,” and then she adds, “What you want?” (a nice touch).

“When You Hold Me” is a blues love song, which might sound like a contradiction of sorts. This song, another penned by Darling and Devlin, is one of the tracks that get me smiling each time I listen. It is kind of beautiful and sweet, yet also has a power in taking what’s intimate and celebrating it. “Nobody knows the places we go/When you hold me, when you hold me/Darlin’ when you hold me/Everything’s all right.” This is one of my personal favorites. Another favorite is “Doorway,” which boasts a beautiful and emotionally charged vocal delivery, and an interesting perspective. Check out these lines: “And I’ll stand in your doorway/’Til all your pain is gone/I swear that I forgive you/It’s been so long/It’s been too long.” I love this song. Another one I love is “Just Another Lesson,” which is more in the folk realm, driven by guitar and vocals. Here is a taste of the lyrics: “And I know I should know by now/Sometimes that thing that you fight for/Is gone when you turn around/You might say that it’s all meant to be/But it’s just another lesson to me.”

Probably the most fun track on this release is “Your House Is Burnin’.” You might not expect a song with that title to be so much fun, but really this is like one of those great Stax tracks, complete with horns right at the beginning, also reminding me of James Brown. “Get up, your house is burnin’ down/Somebody needs to fix some things round here/Before we burn down to the ground/Oh, get up, there ain’t no time to waste.” It also features some wonderful work on electric guitar. “Your House Is Burnin’” was written by Janiva Magness and Dave Darling.

CD Track List
Love Wins Again is scheduled to be released on April 8, 2016 on Blue Élan Records.
Posted by Michael Doherty at 9:45 PM