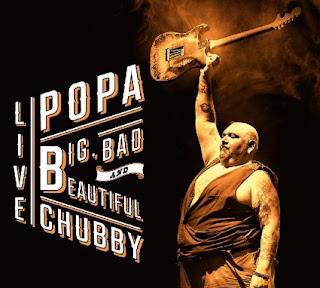 Popa Chubby (Ted Horowitz) has been playing blues rock for more than two decades. In October of 2014 he released I’m Feelin’ Lucky, and then did an extensive tour supporting that CD. Three shows he performed in France in March of 2015 were recorded, and those recordings resulted in his new two-disc live album, Big, Bad And Beautiful. The band is Popa Chubby on vocals and guitar, Dave Keyes on keyboards and vocals, Francesco Beccaro on bass and Andrea Beccaro on drums. Popa Chubby tells us in the CD’s liner notes that these tracks contain no overdubs and nothing added in post. Most of these songs are originals, but there are a few cool covers as well, including a couple of Rolling Stones songs. (I do wish his version of Leonard Cohen’s “Hallelujah” were included here; he was doing that one at a lot of shows at that time, though I don't know for sure that he did it at these shows in France.) There is a lot of music here (more than two and a half hours), and plenty of good blues jams.

The first disc opens with “Working Class Blues,” a tune included on The Hungry Years. The band is off to a good start with a song that most of us can relate to (or at least have related to at some point), with lines like “Twenty dollars in my pocket ‘til the next pay day” and “I got no bank account, got no pension plan.” This song features some nice work on keys as well as guitar during the jam. Popa Chubby follows that with another tune that was included on The Hungry Years (and also on Booty And The Beast), “Stoop Down Baby.” This is a fun song, with a catchy guitar hook and a great jam, making it one of my favorite tracks. And it’s followed by another favorite, “One Leg At A Time,” which Popa introduces as “Put Your Pants On One Leg At A Time.” This one is from I’m Feelin’ Lucky. It has a great rhythm to get folks dancing, and some wonderful work on keys. Tracks like this one make me think Popa Chubby must put on a fantastic live show.

There is some good songwriting on this release, though of course we also get that tired old blues comparison of rain and tears in “Same Old Blues”: “Morning rain keeps on falling/Like the tears falling from my eyes.” Then again, the title is “Same Old Blues,” so perhaps using that familiar simile is part of the point. In “I Don’t Want Nobody,” Popa Chubby gives a little nod to “Next Time You See Me”: “Next time you see me, little baby, things won’t be the same.” That track also features a great jam with some really nice, energetic stuff on guitar.

“Life Is A Beatdown” is one of the first disc’s highlights, and it features some lyrics delivered as a kind of rap: “Running like a locomotive out of steam/Got a piece of the American dream/Then I got a guitar, fell into my hand/Playing for myself, I’m not a company man.” This song is from Peace, Love And Respect, and it contains more wonderful work on keys. It also contains a reference to Ringo Starr’s “It Don’t Come Easy.” “Sweat” is another good track, with a very cool vibe. Check out these lines: “It made you sweat/Lost all means of self-control/Sweat/Like a twenty-dollar whore” and “She said, lay back and enjoy it/It’s gonna hurt/A blow job’s better than no job/A girl’s just gotta work.” This track contains a little James Bond tease. The first disc ends with “Chubbfatha Medley,” which includes an instrumental rendition of “Speak Softly, Love” (the love theme from The Godfather) and “Miserlou” (a song now associated with the film Pulp Fiction).

The second disc opens with a nice long version of “Rock On Bluesman,” a song from I’m Feelin’ Lucky, followed by the fun “Take Me Back To Amsterdam.” The second disc also features a section of Rolling Stones songs. Actually, the first, “Love In Vain,” was originally done by Robert Johnson and then covered by the Stones on their fantastic Let It Bleed record. Popa Chubby does a really good job with it, letting loose on the guitar. The other two are both from Sticky Fingers, another of the Stones’ best albums: “Brown Sugar” and “Wild Horses.” (Both of those were also on Made In The Shade, one of the first Rolling Stones cassettes I ever bought.) Popa Chubby’s version of “Brown Sugar” is fairly straightforward, but “Wild Horses” has a raw power and beauty.

“Caffeine And Nicotine” is a whole lot of fun. It’s a short track, but still somehow manages to pack in a great little jam. “Finger Bangin’ Boogie” is another fun track, with lots of great stuff on both keys and guitar. With a title like that, it would have shocked me if it weren’t fun. The second CD concludes with a ten-minute instrumental rendition of  “Over The Rainbow.”

Disc One
Disc Two
Big, Bad And Beautiful Live was released on January 22, 2016 on Cleopatra Blues Records.
Posted by Michael Doherty at 7:42 PM