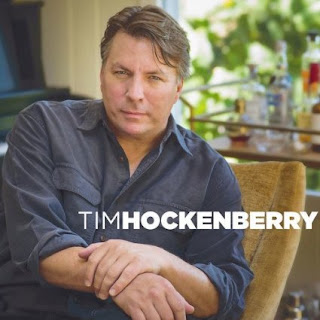 I became interested in Tim Hockenberry because of his Grateful Dead connection. He sang with Mickey Hart on Mickey’s Mysterium Tremendum CD, and also played trombone on a couple of tracks. So I was curious to hear his new self-titled solo album, his first to feature all original material. There are some really wonderful songs here, with tracks like “Ease Your Pain” and “Carrying You” standing out. The songs here are a combination of folk, rock, blues and pop elements, all written or co-written by Tim Hockenberry. And yes, he does play trombone on a track. He is joined by multi-instrumentalist Justin Miller on every track, and has some other excellent guests backing him.

The album opens with “Me And You,” and right away I love the combination of sounds of the clean, clear mandolin and Tim’s deeper, rougher voice as the song begins. “But I’m a firm believer in a certain kind of confrontation/But the kind that’s only meant for two/That’s me and you.” The song then becomes a really sweet-sounding folk pop song. “Me And You” was written by Tim Hockenberry and his son Maxx back in 2012. Maxx also provides some backing vocals on this track. “You’ll never get conviction in your endless search for consolation/As long as you don’t look at you/But I’m  the only mirror that’ll bring you back to your reflection/A little mirror meant for two/That’s me and you.” That’s Gawain Matthews on the mandolin, by the way; he also played with Mickey Hart.

That is followed by “Ease Your Pain,” one that stood out for me for the first time I listened to this CD. The vocals are passionate, loving. “I told you I was sorry/A thousand times before/But it’s so hard to hear those words/Behind a closing door.” Plus, there is some nice work by Russ Pahl is on pedal steel. Tim plays piano on this track, and Carl Wheeler is on organ.  It’s a really good song.

“Faith In You” is more of a rock song, and for me isn’t quite as interesting or compelling as most of the other tracks. I much prefer the track that follows it, “Carrying You,” which has a delightful, light, playful vibe. It’s such a pretty and sweet song, with lines like “I’ll take you to the top, where I’ll kiss you like a fool/You lift me up, but it’s me who’s carrying you.” And then it features a sort of yodeling, which comes as a surprise. And just when I thought this song couldn’t possibly get any better, there is suddenly an Irish-sounding section. I absolutely love this song. Gawain Matthews plays mandolin on this track, and Dan Feiszli is on upright bass.

I am also really fond of “Come On Let’s Dance,” which is another that is more in the folk realm.  This music makes me happy. It’s an unabashed love song, simple perhaps, but true, with lines like “All the ones that came before, they just vanished on that night” and “It doesn’t matter what you do, I just want to be with you.” On this song Tim is joined by Natasha Miller on violin, Gawain Matthews on mandolin and John Deaderick on organ.

“I’ve Got Nothin (Better To Do)” has a nice bluesy soul vibe, perfect for that rough quality in Tim’s voice. “I’ve been cleaning up all morning, babe/I even took out my garbage too/And when I was putting away my old suitcase/Guess what, I found your other shoe.” And I love those backing vocals by Danetra Moore and Sara Williams. With the backing vocals and organ, this track at times makes me think of the Jerry Garcia Band. Carl Wheeler plays organ on this track. “I’ve Got Nothin (Better To Do)” was written by Tim Hockenberry and Natasha Miller. “Crazy” also has a cool bluesy thing happening, and some really good lyrics. Check out this line: “Tell me, when did crazy about me turn into just plain crazy?” Excellent! Seriously, that is one of my favorite lines from any song this year so far. By the way, this is the track with Tim on trombone (as well as trumpet, for that matter).

The album then concludes with “This Time By Me,” another unabashed love song, this one about realizing what he feels isn’t new but also realizing that that doesn’t lessen the strength and impact of what he’s feeling. And Tim’s vocal delivery has the appropriate emotional charge. “Having you in my life is everything to me/I know it’s all been said before/But this time by me.”

CD Track List
Tim Hockenberry is scheduled to be released on March 4, 2016 on Poignant Records.
Posted by Michael Doherty at 10:13 PM