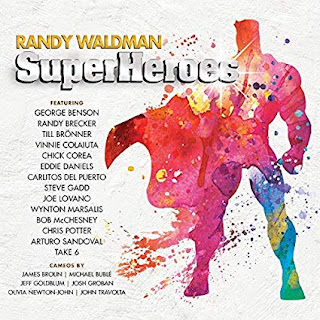 Approximately a decade ago I swore off all superhero movies because they had become pointless, ugly and dull (I was talked into making an exception for Wonder Woman, a decision I immediately regretted because it is among the worst of the genre). But I grew up reading comic books and watching superheroes on television and in movies. When I was really young, it was shows like Super Friends and Wonder Woman, and of course re-runs of the original Batman series (which is still the absolute best superhero program), and I collected Spider-Man and Fantastic Four comic books. Later I enjoyed the first couple of Sam Raimi Spider-Man movies and the first two X-Men films. I still have some affection for these superhero characters, even though Disney has done its best to ruin them all for me (Disney is the great destroyer of good things), and I still enjoy those old programs I grew up watching. So I was excited to hear Randy Waldman’s recent release, Superheroes, in which he delivers jazz interpretations of some of the beloved superhero themes from my youth. The band for this release is made up of Randy Waldman on piano, Carlitos Del Puerto on bass, Vinnie Colaiuta on drums, Michael O’Neill on guitar and Rafael Padilla on percussion. These tracks also feature several special guests, including George Benson, Wynton Marsalis and Chick Corea.

Randy Waldman opens this disc with “The Adventures Of Superman (TV Theme),” a perfect choice because Superman was the first superhero a lot of us were exposed to as kids. This track does include that famous spoken introduction: “Faster than a speeding bullet, more powerful than a locomotive…” And some actors you certainly know lend their vocal talents to that section, people like James Brolin, Jeff Goldblum, Olivia Newton-John and John Travolta. Pretty cool. And Randy Brecker and Eddie Daniels join the group on trumpet and saxophone respectively, adding some wonderful work. But that fantastic lead on piano is what really excites me about this track. And at the end there is a drum solo, which I appreciate. That’s followed by “Mighty Mouse Theme.” This was a cartoon I adored as a child in the 1970s, and this track is a lively, fun rendition of its theme, with some excellent drumming by Steve Gadd and Vinnie Colaiuta. There is also a nice lead on saxophone by Joe Lovano.

“Spiderman Theme” begins with an a cappella delivery of that familiar and delightful theme performed by vocal group Take 6. This is a superhero theme that has been covered a lot over the years, but somehow always manages to be enjoyable. This version features some great work on saxophone by Chris Potter, and more excellent work on keys (is there just a touch of “Brazil” at one point?), and the vocals pop up from time to time throughout the track. Then George Benson joins Randy Waldman for an interesting version of “Superman” from the 1978 movie. I loved this movie when it came out, and I still enjoy it, though it has perhaps the stupidest thing I’ve ever seen in a film: Superman reversing time by spinning the Earth the opposite way on its axis. Who the hell came up with that asinine idea? Anyway, this rendition features some phenomenal work by George Benson on guitar.

As I mentioned already, the 1960s Batman television series starring Adam West and Burt Ward is the absolute best superhero adaptation for either TV or film. I enjoyed it as a child, and love it even more as an adult. If you haven’t watched it recently, it might be a good idea to revisit it. It is possibly the funniest American television show ever (certainly it is in the top five, along with Arrested Development and All In The Family). I’ve heard some excellent renditions of the show’s theme song, including a recent version by Holland & Clark. This version by Randy Waldman is definitely worth checking out. It features Wynton Marsalis on trumpet, plus some really good work on bass and drums, as well as keys. It is fun, and I love the way it moves. Check out that cool lead on bass toward the end.

The Incredible Hulk was a television show I used to watch with my dad, and I always loved that sad theme at the end when you see Bill Bixby hitchhiking. What we get on this album is a version of the main titles theme, which I had forgotten about, but which is basically a more lively variation of that great ending theme. This track features Chick Corea. “The Incredible Hulk (Main Title)” is followed by “Six Million Dollar Man Theme.” The Six Million Dollar Man was another show I watched with my dad when I was growing up. I have such fond memories of it, but have never revisited it. Does it hold up? Anyway, this is a cool rendition of the theme, featuring some great stuff on drums. Both Steve Gadd and Vinnie Colaiuta play drums on this track. Arturo Sandoval and Wayne Bergeron are on trumpet, while Stephen Szabadi is on trombone and Brandon Fields is on saxophone.

Then we get the theme to the 1989 film version of Batman, composed by Danny Elfman. This track features Michael O’Neill on guitar. There is also more wonderful work on piano. That’s followed by “X-Men TV Theme.” I wasn’t even aware there was an X-Men TV show.  Till Brönner plays trumpet on this track, which has an excellent energy. There is also some wonderful work on bass, and then toward the end, some delicious drumming. Then Randy Waldman gives us “Underdog Theme.” I had completely forgotten about Underdog. What a treat it is to hear a new version of that show’s theme, particularly because it features Bob McChesney on trombone and Steve Gadd on drums. The disc then concludes with “Super Chicken Theme,” one I wasn’t all that familiar with. Super Chicken was a segment from the George Of The Jungle show. When this track begins, it sounds to me like Gershwin’s “Rhapsody In Blue.” This is one of the most delightful, enjoyable tracks, moving at a frantic pace, the horns flying. And yes, they throw in a few chicken noises toward the end. Arturo Sandoval is on trumpet, Eddie Daniels is on clarinet, and Bob McChesney is on trombone.

CD Track List
Superheroes was released on September 28, 2018.
Posted by Michael Doherty at 7:52 AM