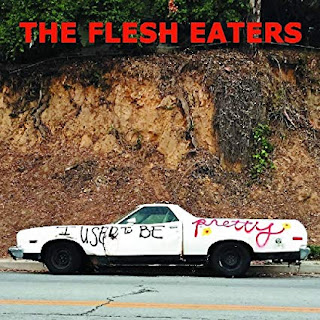 The Flesh Eaters are back, with their first new studio release in fifteen years, I Used To Be Pretty. The music is punk, but these are not short songs, like those offered by most punk bands. These guys dig into their tunes, create a world and invite you to live there (and by “invite,” I mean grab you in your sleep and pull you inside). The disc has eleven tracks, nearly an hour of music. There is some new material, but they also revisit several older tunes, including tunes from the 1982 record Forever Came Today. Even if the name The Flesh Eaters is unfamiliar to you, you do know this band, or at least its members. Members have come and gone over the years, the only constant being Chris Desjardins (Chris D.), but the lineup for this new release is basically the same as for the album that is considered by many to be the band’s best, 1981’s A Minute To Pray, A Second To Die: Chris D. on vocals, Dave Alvin (from The Blasters, X) on guitar, John Doe (from X, The Knitters) on bass, Bill Bateman (of The Blasters) on drums, D.J. Bonebrake (of X) on marimba and percussion, and Steve Berlin (of Los Lobos) on saxophone. How is that for a lineup? But that’s not all. Julie Christensen joins the band on vocals for several tracks. I became a fan of Julie Christensen because of her fantastic work with Leonard Cohen. But before that, she was a member of the Divine Horsemen with Chris D. (she and Chris D. were also married). So what I am saying is there is a ridiculous amount of talent on this album.

The album gets off to a great start with “Black Temptation,” one of the disc’s new tunes, and one that features Julie Christensen on vocals. This is a seriously cool punk tune with a raw vocal delivery. And I love the way the saxophone creates a kind of strangely sexy atmosphere during certain sections. Check out these lyrics: “I always think the queen of wolves/Is a delicate flower/And end up just meat/For the bitch to devour.” My favorite line, however, is “The history we’re writing has no tomorrow.” That’s followed by “House Amid The Thickets,” a song that first appeared on The Flesh Eaters’ 1999 release, Ashes Of Time. I love the vocal delivery immediately. There is something dark and forbidding here. “Then she starts going back out to bars/Before you know it, she wrecks all her cars/How does she stay so beautiful?/And why am I such a goddamn fool?/I guess because I’m a man, sucker for sexy firebrands.” But the song also has a good groove. It has something of a different feel from the earlier version, in part because this one features saxophone and not organ.

“My Life To Live” has a more upbeat, fun feel from the start, and a driving rhythm (I’m digging that bass). This one rocks. This song was originally the lead track on 1982’s Forever Came Today. After listening to it several times, I think this new version is actually better than the original. That’s followed by a cover of Fleetwood Mac’s “The Green Manalishi (With The Two Prong Crown).” This is a song from Fleetwood Mac’s early blues days (which I still think is the absolute best stuff Fleetwood Mac ever did). This version by The Flesh Eaters has a heavy, dark feel (like the original), but with saxophone (which I love). It sounds like a beast that crouches and is ready to pounce and pull you into its lair. “Miss Muerte” was the title track to The Flesh Eaters’ 2004 album. This new version has a wonderful intro by D.J. Bonebrake, then kicks in. This is a fun track, and I love the backing vocals by Julie Christensen. Plus, it has some bloody great lyrics, such as these lines: “There’s no such thing as a real-life story/As soon as you’ve lived it, it’s gone/And so’s all the wealth and glory/You just don’t understand, you, you’ll never understand.” And these: “I’m so sick of all you angry people/Killing each other for the sake of your god/You just can’t seem to understand/Your enemy is god-made man/So get off your goddamn cross/And let go your fetish of loss.”

“The Youngest Profession” begins with something of a march on drums, and develops into a slow, haunted bluesy groove. These are the opening lines: “If you know what’s good for you/You’ll be too tough to care/Coming from a home where kindness is rare.” A sudden command to “Get crazy” is answered and obeyed by the guitars. The vocal work here reminds me at times of Jim Morrison in his most unhinged moments. “We’ll stay together  and stop second guessing/We got to tame our hearts, but steer clear of obsession.” The order to “Go crazy” is issued again, and perhaps this time it isn’t just the guitars that respond, but us too. That’s followed by a cover of The Sonics’ “Cinderella,” a song that The Flesh Eaters included on the 1988 album Live. This track comes on fast, with that driving drum beat, and is cool, raw fun. Then “Pony Dress” is classic, pure punk, whatever that might mean. It is a song that first found its way onto a 1979 compilation titled Tooth And Nail. This new version is fantastic.

“The Wedding Dice” is a tune from Forever Came Today. This is a fast, hard, lively punk tune. “Somebody gives you arsenic so you won’t be lonely/Fire in the brain is calling it quits.” I love the sax in this new rendition, particularly at the end. There is another strong groove in “She’s Like Heroin To Me,” a song written by Jeffrey Lee Pierce and originally recorded by The Gun Club, from that band’s first LP, Fire Of Love. The Flesh Eaters deliver a damn good rendition. I Used To Be Pretty then concludes with its longest track, “Ghost Cave Lament,” a slow, unsettling number featuring good work on saxophone. I also particularly like the guitar work on this track. This is a new composition, one of only two on this disc. “The love that I steal is fuel for this madness.” This track features a powerful vocal performance, and the lyrics contain some horror imagery, such as “Oh, St. Lucy, she plucked out her eyes from her sockets.” This is a wild ride to wrap up an excellent album.

CD Track List
I Used To Be Pretty was released today, January 18, 2019, on Yep Roc Records. The band is now on tour, so check the official website to see if these guys are heading to your area.
Posted by Michael Doherty at 1:10 PM