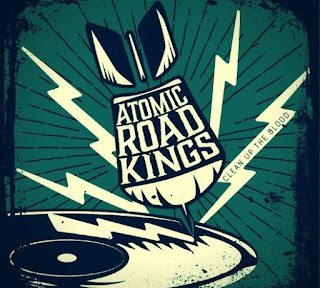 The moment I first put on Clean Up The Blood, the new release from Atomic Road Kings, I knew it was something special. This album is blues with a bit of rock and roll, and a lot of soul, with a delicious classic sound. That sound is by design, as the album was recorded using old analog equipment. What a treat this disc is, especially today when the country is almost unrecognizable in its ugliness, and so many of us want to escape to another time, another place. A place that feels real, that feels honest. You know? And this music is just the right vehicle to take us there. The album features mostly original material. Atomic Road Kings are Jon Atkinson on vocals and guitar, Eric Von Herzen on harmonica, Bill Stuve on bass, Danny Michel on guitar, Malachi Johnson on drums, Tony Delgado on guitar and Scot Smart on guitar.

The album gets off to a great start with “I’ve Got Time,” blues with something of a Memphis feel. I love everything about this, for (as I mentioned) it all strikes me as honest and real. And a large part of that is due to its being recorded on old equipment, everything having an immediate and true sound. But the song itself is really good and features some great stuff on both harmonica and guitar. However, it’s that solid and cool work on bass that grabs me and holds me. “The time I was given could surely have been worse/But being from my family is nothing but a curse/I’ve got time/I’ve got time to be alone.” That’s followed by “Rumors,” the guitar having a delicious raw sound. Oh man, this is just so bloody good. Again, it has a classic sound, yet this song – like almost all of this disc’s tracks – is an original composition. Listen to that great vocal performance, the way he makes the words vibrate at times. “To lose this woman would be the death of me/I’ve seen the truth/Lord, I’ve seen it in her eyes.” This track features more great stuff on guitar. If you want the real deal, you’ve got to give this disc a listen.

“In Arms Reach” rolls along with a groove that got me smiling. We get more great work on harmonica, and another wonderful bass line. Then there is a bit of rock and roll to the sound of “Have Your Way.” And yet there is also a darkness, creating a very cool vibe. This is one of my favorite tracks. The vocals are kind of smooth, coming at us from the corners of an underground club where the chicks are all in black sweaters. “I feel all right/I feel, yes, I feel all right.” But ah, it is over too soon. Then “My Way Back Home” jumps off to a lively start. Hell, there is just not a single false note on this entire disc, no bullshit whatsoever, just some great playing. I dig the instrumental section of this track, particularly the work on drums. This tune has a damn good groove, and becomes a fun jam, that harmonica singing with a powerful voice. “With my baby in my arms I can do almost anything.”

“Clean Up The Blood,” the disc’s title track, has a slower, somewhat heavier feel, but with some touches on electric guitar that rise fiery above the general heat. This tune has a gloriously sweaty sound, a heat you can’t escape. I love the combination of darkness and joy that this music has. Take a track like “Ain’t For Me,” for example. There is a deep rumbling at its core, and yet is also totally danceable. This is just so damn good. The disc’s only cover is “Two Sided Story,” which fits right in with the rest of the material, not standing out as being older, though it is listed as “traditional,” because that is the sound and vibe of the entire album. It develops into a good powerful jam, driven by harmonica. It’s followed by “Vibrations,” a tune that is just dripping with cool right from its start. Robert Welch joins the group on piano for this track, delivering some absolutely delicious work and helping to make this another of my favorites. This album gets in one final bang with “Back Down South,” a raw, rockin’ tune with some more good stuff on harmonica. “For all my troubles, baby, I’ve got you to thank/I’ve got you to thank, I’ve got you to thank.”

CD Track List
Clean Up The Blood is scheduled to be released on February 21, 2019 on Bigtone Records.
Posted by Michael Doherty at 9:56 AM